What airfoil design is needed for a 4 m wingspan soaring plane?

I’d like to build one that is heavier than a F3J plane and it will be similar to NASA’s soaring plane of the "Autonomous Soaring Plane" project. What kind of airfoil do I need? Simply scaling a normal airfoil would have bad results.

First for those who wonder what F3J is: This is the FAI model aircraft category for thermal soaring.

Quick answer: This answer describes what resources are available on the Net.

Your choice of airfoil depends on the wing loading and the size of the model, because those will determine the Reynolds number of the flow over the wings. Soaring flight requires high lift coefficients, but maybe you also want low drag for sprints between thermals or to avoid being blown away by strong winds.

The description of the NASA Autonomous Soaring Plane gives 15 pounds of mass and a wingspan of 170 in. It was based on a model glider by RnR Products, and there I found the aspect ratio of 19.8 and the wing area of 1545 sq.in. These numbers are not very consistent, but close enough to get an idea.

Here $n_{z_{max}}$ is the maximum load factor, and the picture below shows that little is gained by increasing $n_{z_{max}}$ beyond 3. The little DFS Habichts help to illustrate the bank angle. 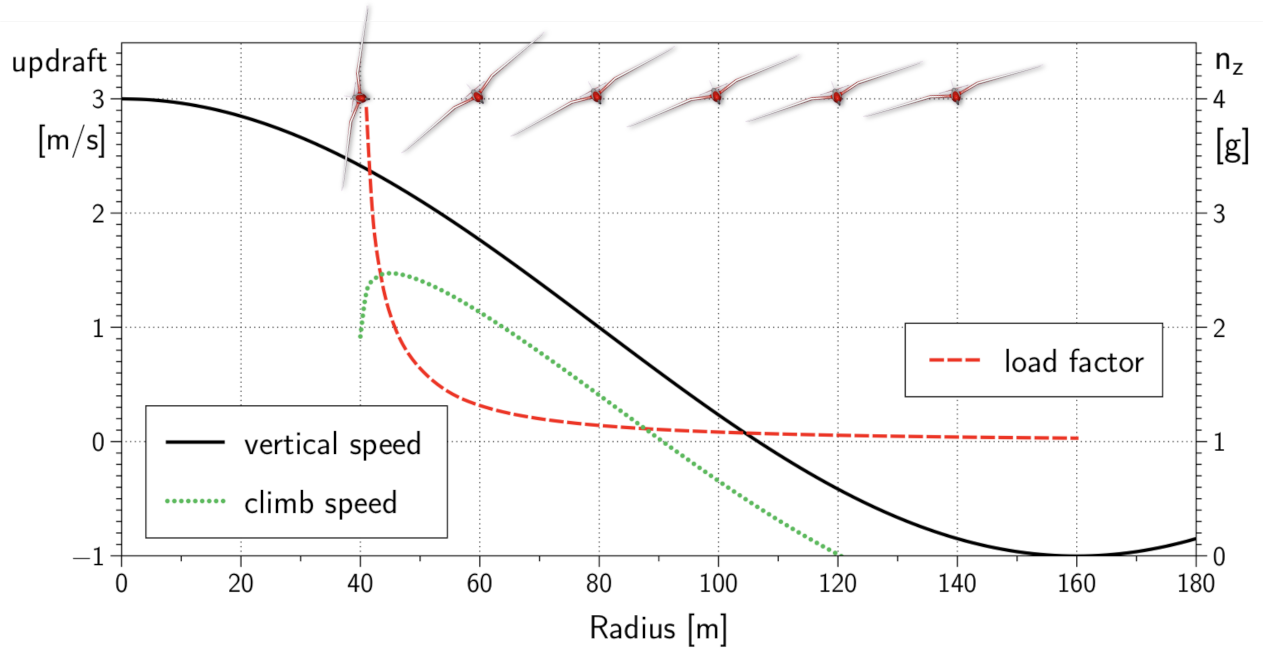 My recommendation is to try the UIUC airfoil database and select a specific model airfoil with low drag at high lift coefficients and Reynolds numbers down to 100.000. It should have high camber and a thickness of around 12% to keep wing weight down. If you have the lower range of Reynolds numbers covered, you need not to worry about the higher range. You might even consider to use different airfoils over the wingspan, depending on the minimum local Reynolds number. Ideally, you'll find a set of airfoils which have been optimized for exactly this purpose, like the DAE11 - DAE21 - DAE31 airfoils of the Dedalus human powered aircraft.

Not the answer you're looking for? Browse other questions tagged aerodynamics model-aircraft or ask your own question.

9
Where can I find data tables for lift and drag coefficients of airliners?
1
Which airfoil would be optimum for a glider?

4
How can I get started on a winglet design for a small remote controlled aircraft?
7
What is the best design for a small flying wing with special flight envelope?
0
What knowledge is needed to build a small aircraft?
6
How do I choose the correct NACA airfoil for my requirements?
5
How do I choose the correct airfoil?
0
What are the equations of motions for parafoils?
1
Aerodynamics and fuel consumption of a powered glider
1
What airfoils are used for the current generation of general aviation VTOL aircraft?
0
RC airplane required engine power