Airbags in aircraft - is that just a military thing?

The Bell OH-58D (a military helicopter used by the USA) has an airbag to make life better in the event of a crash. 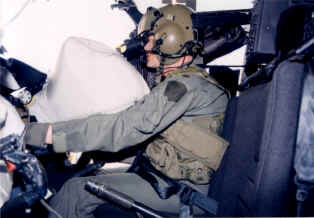 I had never heard of such a thing in an aircraft before and I wondered if this unique to the Bell OH-58 and, if not, whether civilian light aircraft come with such an option ?

Airbag seatbelts on planes are a "new" thing (well, since about 2001 apparently), but they're available on new-production aircraft and can be retrofitted to older General Aviation planes as well.

You can also find them on some airliners (typically in the exit rows where the next row is too far away to assume a proper brace position).

AmSafe (the folks who make a good percentage of the aviation-approved seatbelts) has a nice video (or two) on the subject of aviation airbags.

Not the answer you're looking for? Browse other questions tagged safety general-aviation military or ask your own question.

70
Why don't commercial jet aircraft have a break-apart, parachute escape system?
28
Why not just drop an engine on fire?
21
Why don't big commercial planes have full aircraft parachutes?
3
Why are movable rocket thrusters not used in airplanes?
8
Why are passengers not given the option of shoulder harnesses?
0
What safety systems are currently being developed for crash situations?

7
Which light aircraft are known to have a quiet cockpit?
9
Are HUD systems available for light GA aircraft?
13
Are emergency actions an appropriate part of a captain's briefing in a light aircraft?
28
F-111 emergency landing with no wheel; what is done to reduce risks when loosing a wheel?
52
Why don't commercial passenger safety videos ever explain policy instead of merely dictating it?
3
How do the military pilots of Air Force One train for exceptional circumstances in an airliner not designed for high performance?
2
Why are clearing turns supposed to be shallow bank?
13
What options are there in Canada for treatment of severe depression and anxiety for pilots?
13
Has a passenger's consumer electronic device ever actually caused a crash?