How do cross-wind correction controls help while on the ground with wings level?

When taxiing, taking off and rolling out we are told to use cross-wind correction inputs. Assuming a headwind, you bank into the wind by raising the aileron on the windward side and lowering the other aileron.

However, it appears that just before you take off, even with the wings level, holding the ailerons as above helps the plane avoid skidding sideways on its wheels. I understand the physics once you are airborne and the wings are no longer level (you will slip into the wind). But what I don’t understand is why holding up aileron on the windward side helps prevent skidding sideways, even with the wings level.

How do the physics work to prevent sideways force on the gear? Or am I imagining that the wings are level and in fact the windward wing is lowered?

I’ve felt this more strongly in a Citabria 7ECA or similar light tailwheel, high-wing aircraft, but I think it also applies to a tricycle-gear C172 or similar.

Your assumption is that the wings are level when both main wheels are on the ground. But this is not necessarily true. Even when both wheels are on the ground, the wings can still have a small tilt. The suspension of each gear works independent of the other, and the weight on the wheel determines how much the suspension compresses or the gear strut will bend. By deflecting the ailerons, you re-distribute the lift between the wings, and control gear compression.

I know, the picture below shows a glider and not a Citabria, but the principle is the same. The high wing arrangement creates a sizable rolling moment even without dihedral. 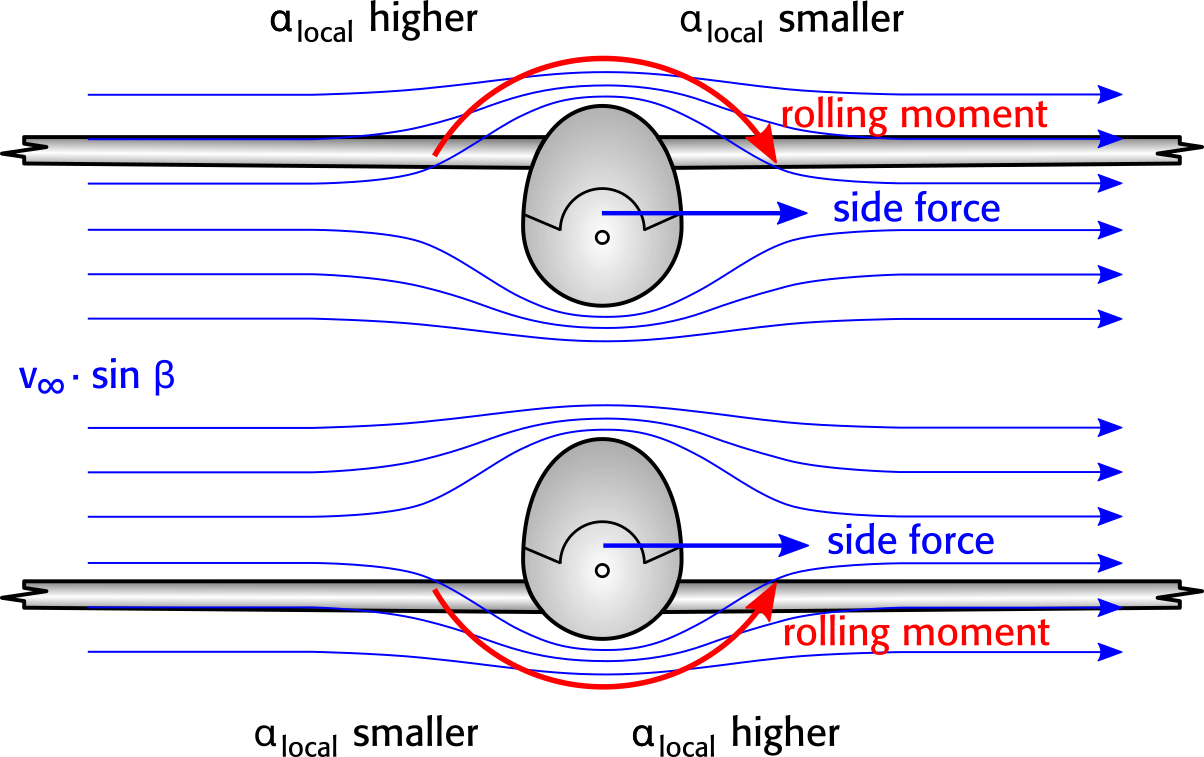 Also, if the wind gets under the upwind wing, it will just push the upwind wing further upwards, just as if you were carrying a 4x8 piece of plywood.

These two factors can contribute to tipping the airplane over.

With gliders, this is much more pronounced because they don't have wheels under the wings, so the ground crew always keeps the upwind wing lower in a crosswind. In a glider crosswind takeoff, full upwind aileron is applied before takeoff, and as the aircraft starts to roll, the aileron is continually reduced to keep the wings level, with downwind rudder to keep the fuselage aligned with the runway.

I think the biggest component of the difference is the surmised answer, that is the wings are not level in the described situation. If wing is strong enough, you will have to transition to rolling on one, upwind wheel, or you will not be able to keep on the centerline.

Not the answer you're looking for? Browse other questions tagged flight-controls crosswind aircraft-physics or ask your own question.

27
Why do airports have to close in bad weather?

9
What is the maximum wind speed a Boeing 737-800 can deal with during takeoff and landing?
3
How heading bug is calculated during cross wind and tail wind?
3
Why changes the lift during turning with sidewinds? Why is there relative wind in the wind-frame?
3
What does 'laterally aligned' mean in this description?
7
In simple mechanical stick linkages, is there crosstalk between the aileron and the elevator movement?
0
How do airplanes measure cross-wind?
6
What are the wake turbulence characteristics at ground level near landing aircraft?