Do lights on aircraft flash in a specific pattern?

On a clear night, everyone can spot planes quite easily: they have flashing lights. I have noticed that the pattern seems different for different planes, and tried to find a meaning.

What I saw so far is that they seem to have three lights that flash, two at the wings, one at the tail. Those at the wings flash two times (approximately per second, in quick succession), and that one at the tail flashes only once, along with the first flash of the wing.

Now that explains two patterns I seem to see from further away: Two flashes and one flash. It is probably that I am just not seeing the wings flashing for those where I only see one.

So far so good, but then again sometimes I see planes with more flashing, and those are faster. I had difficulties to count them, but it's at least three, maybe four quick flashes.

Do these different patterns have any meaning? I tried to match up the planes with the flight radar information, but since it is quite crowded around here, I wasn't really able to identify them. But whenever I saw that quick flashing ones, there was a military plane around, is that just coincidence?

Civilian aircraft have flashing lights based on manufacturer design preference. As others have stated, aircraft like Boeing and Airbus have different patterns.

However, military aircraft can often select the pattern they want to use. This helps military pilots identify key tactical aircraft during night operations, such as the tanker flying around the carrier. It is definitely not coincidental that you noticed military aircraft with a unique pattern, although I'm truly shocked at your attention to detail.

No, the pattern has no meaning, though the double-flash does identify the plane as an Airbus; other manufacturers use a single flash.

In general, lights flash for the same reason that hazard lights on a car flash; because flashing lights are easier to see than solid lights. This applies to a lot of things in aviation. Building lights, tower lights, aircraft lights all flash because it is easier to see a strobe in low visibility than a steady light. White strobes are also brighter and red strobes are less reactive to the eye (which is why cockpits use red light). All of these combined help to make strobes easier to see and identify.

As to the pattern, as many have mentioned there is no specification on a specific pattern that aircraft manufacturers need to follow. For an aircraft like an airbus, wing tips may have a different blink pattern because the manufacturer wanted it that way. If I could take a guess, it would be so you can identify the orientation of the aircraft if you cannot still see the solid colored lights.

Red flashing lights top and bottom of the aircraft are turned on when pilots are clear to start engine. If you see those lights you know that there is an aircraft with running engines. So it could be moving towards to you, so be careful.

Tail light is for it to be seen from behind. The aircraft behind of you knows there is an aircraft in front of him.

Flashing light at wings means that this aircraft is airborned or about to be. Pilots turns that lights on when they are on the runway. These lights are stays put during the entire flight until the aircraft off the runway after landing. 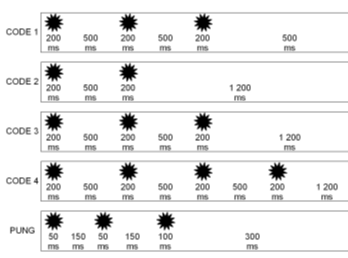 Pilots can select the pattern they want to use according to tactical situation:

There's no specification for a pattern of flashing, and significant variations exist among different airlines and military. There is a uniform requirement for position lights (steady red and green on the left and right wingtips, white on the tail) and an anti-collision light system which is one or more flashing lights which can be anywhere on the aircraft. US requirements are in 14 CFR 25.1401, and say that the system must appear to flash between 40 and 100 times a minute. Areas where lights overlap can have as many as 180 flashes per minute.

I don't know about civilian aircraft, but it's true that military aircraft have specific patterns. Each aircraft role flashes differently. Ill use F-18s as an example because they are multirole. An F-18 tanker might flash *, where an F-18 strike fighter might flash like *-

Not the answer you're looking for? Browse other questions tagged safety regulations aircraft-lighting or ask your own question.

1
Airplane Strobe Light Pattern?
1
What type of aircraft uses this long flashing pattern?
10
Do lights on wingtips change color at different times of the day?
10
Is it unusual for an aircraft to flash its landing lights in sequence?
5
What is the pattern of the flashing light in Airbus A340-300?
5
What aircraft has this pattern of white strobe lights?
2
Can fighter jets set their lights to flash six times?

23
Where is the safest seat in the plane?
23
What exactly distinguishes a beacon light from a strobe light?
5
Why were the cabin lights turned on during the flight?
6
How do pilots clear an aircraft to fly through a hurricane?
48
How close can planes fly to each other over the ocean?
4
Eviation Alice Powerplant Placement
6
What pattern of position lights did early Soviet jetliners use?