Is the sweep angle of an inverted wing zero degrees?

Is the sweep angle of an inverted wing zero degrees, when the angle between the fuselage and the inverted delta wing is 90 degrees? Or is it different because the span of the wing isn't constant over the chord.

Sweep is normally given as the quarter-chord sweep. If not, it must be made clear by some qualifier, like leading-edge sweep.

Your previous questions let me suspect that you are into a special version of ground-effect vehicles, the Lippisch aerofoil. The picture below shows the X-114. 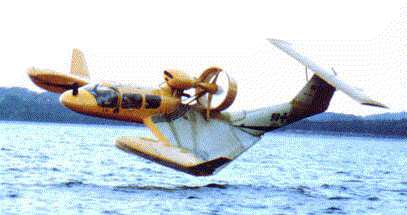 The wing is a delta with negative sweep, so it has a straight leading edge and a forward-swept trailing edge. The idea is to have a positive angle of attack and very little space between the trailing edge and the ground for maximum ground effect.

15
How would an Inverted Delta Wing planform behave, Straight part forward? Are there wings shaped this way?

11
Why should isobars be aligned with the leading edge of the main wing for a transonic cruiser?
4
What is the reference length in calculating the friction coefficient?
9
What is the optimal wing sweep angle for a passenger airliner?
6
What are the definitions of elevator angle of attack and critical angle of attack?
32
Why doesn't the Concorde have any wing fences?
20
Why is the trailing edge sweep angle smaller at the wing root?
6
Is it possible to fly horizontally with zero angle of attack?
6
What aerodynamic characteristics arise from trailing edge sweep angle?
3
What factors are included in the moment coefficient of a wing?