Why are adjustable area jet engine nozzles mostly limited to military use?

It seems that only jet engines with afterburners use adjustable area nozzles (this means adjusting the area of the nozzle but not necessarily the direction). This includes most fighter jets, as well as bombers like the B-1B and Tu-160. Outside of the military or afterburning engines, they don't seem to be used, even for smaller engines.

What is the reason for this? Is the Variable Area Fan Nozzle (VAFN) concept related?

Wikipedia explains that it is related to supersonic operation; I'm looking for a more detailed explanation about the reasons for this.

If the combustion gases have enough pressure to be accelerated to supersonic speed, the nozzle is actually first convergent and then divergent to achieve the best acceleration of the flow. The convergent, subsonic flow accelerates until in the section with the smallest area, called the throat, the speed of sound is reached, and the following divergent section accelerates the now supersonic flow further until its pressure drops to ambient pressure. This con-di-nozzle needs to adjust both the cross section of the throat and the cross section of the exit area. Failure to get especially the throat area right will mean substantial thrust loss in operation.

Afterburning engines need adaptable nozzles due to the different operating conditions in dry and wet mode, so they profit the most from adjustable nozzles. Reheating the exhaust gas means to increase its volume, so the nozzle needs to become wider to be properly matched. In general, if the exit speed of the combustion gases is supersonic, an adjustable nozzle is required. Even some early jets without afterburners had an adjustable nozzle: The central cone of the Jumo-004 nozzle could be moved fore and aft, which changed the location of the bulbous aft section, helping to get the throat area right. Note in the picture below that the cross section widens again in the last part of the nozzle, which shows that the exhaust stream of the Jumo engine was mildly supersonic. 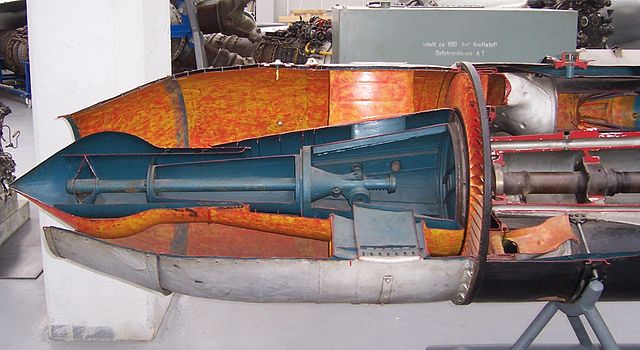 Airliner engines would only gain little from an adjustable nozzle, and considering the mass increase of a fully adjustable nozzle, would in total have lower efficiency. Short-range aircraft usually have nozzle geometries optimized for field performance while long-range aircraft prefer to optimize for best cruise efficiency. Their core flow exit speed is still subsonic or only mildly supersonic - please note that the speed of sound in the heated combustion gas is much higher. At 500°C the speed of sound is almost 560 m/s.

The variable area fan nozzle tries to do for the fan flow what the regular nozzle does for the core flow of a jet. So this is indeed a related concept and helps to optimize performance both at low and high speed. The picture below is copied from the US patent 2011/0302907A1 and shows an adjustable end part of the cowling (crosshatched, 54). The exit speed of the fan flow is subsonic at take-off and mildly supersonic in cruise, and since its mass flow is much higher than that of the core in airliner engines, making the nozzle variable pays off earlier. By adjusting the exit pressure by varying the exit area it can squeeze out some performance gains. 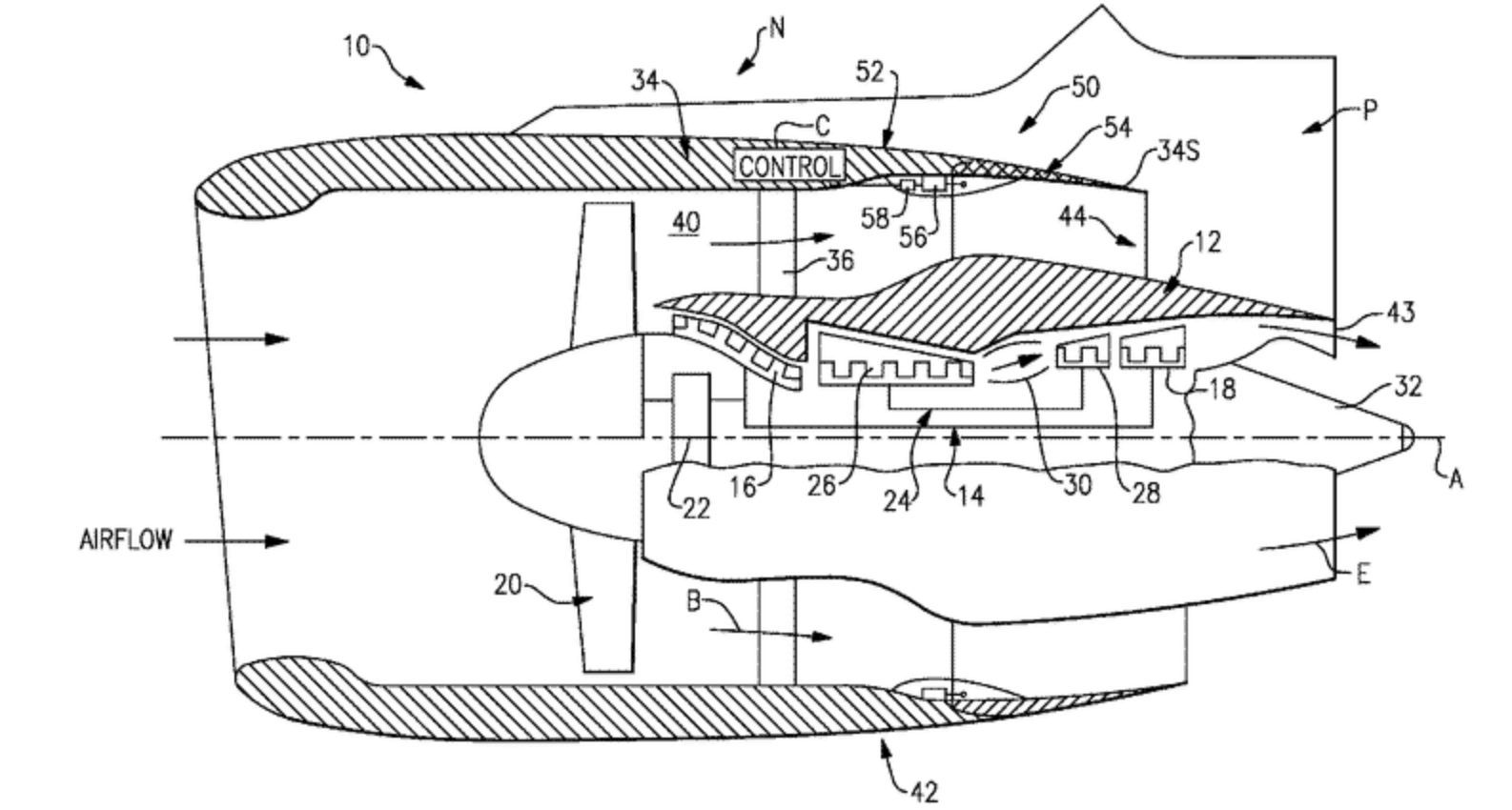 While not an engineer, I do fly aircraft with adjustable nozzles, and I may be able to shed some light on their basic principle of operation:

The purpose of the nozzle, in subsonic flow, is to constrict the airflow, thus greatly increasing the thrust as it leaves the engine (technically speaking, it converts the gas into a thrust, thereby making the gas generator a jet engine.) If there was no nozzle, then the gas leaving the turbine would not have nearly the same thrust coming out of the back as it does when the nozzle restricts. You can think of it like placing your thumb over the end of a hose, the flow is much faster as you restrict the flow of water. More technically, flow speed increases while the actual pressure decreases--the venturi effect. However, during afterburning operations, the nozzles have the reverse effect, and closing them actually reduces flow speed. Thus, during supersonic flow the nozzles actually open.

Moving the throttle forward on a jet does a few things, it increases fuel, creates more gas, and also restricts the nozzles. During taxi operations, I'd guess that the nozzles restricting, as you come off the idle stops, have more of an effect on the jet moving than the actual increase in N2. In fact, were the nozzles not to restrict properly and suddenly open during flight, the jet would fall out of the sky. Its an actual emergency we practice, because, occasionally, nozzles will malfunction which, in a worst case scenario, can leave you with two useless engines. However, as with most things, there's a caveat. When operating in afterburner the nozzles open back up again. Nozzles that are stuck closed in AB have the same effect that nozzles that are stuck open in mil do--you become a brick. So essentially, nozzles are only required if your engine is capable of afterburning and generating supersonic flow. You can't generate thrust with open nozzles below burner, and you can't generate thrust with closed nozzles in burner. Its just more complexity that non-AB engines don't need, and more that can fail in flight.

If there was any reason why commercial aircraft do not have the same engines we do, this would be it. With the exception of highly inefficient turbojet engines, nearly all commercial aircraft are equipped with turbofan engines, high-bypass turbofans to be precise. Without getting into the weeds, the high-bypass flow used in modern engines allows them to operate much more efficiently than our engines. With a high-bypass engine, all flow will remain subsonic, and a fixed exhaust is not only more economical, its also safer because it can't open and reduce thrust. Fighter aircraft also use turbofans, however, ours are low-bypass, and consume much more fuel than our civilian counterparts. The benefit is that we are also able to operate in a much more diverse environment: high AoA's, supersonic flow, rapid power fluctuations, etc... Given our mission the trade off between lost efficiency vs performance gain makes sense. For reference, on the Super Hornet, our engines burn over 38,000pph at MAX. This kind of inefficiency would quickly bankrupt an airline, because they just don't have the same kind of operational requirements. Granted, we don't fly around at MAX all the time, but you get the idea.

Peter Kämpf already gave good long answer with nice diagrams. tl;dr, the thing boils down to subsonic and supersonic flow behaving differently. The goal is to increase the exhaust speed. For subsonic flow you achieve that by restricting it, but for supersonic stream you have to expand it. So supersonic engines (and supersonic exhaust speed is rarely reached without afterburner) need variable area nozzle, subsonic ones (all airliner engines except Concorde) not.

Seems to me your own link gives the answer:

Non-afterburning subsonic engines have nozzles of a fixed size because the changes in engine performance with altitude and subsonic flight speeds are acceptable with a fixed nozzle. This is not the case at supersonic speeds as described for the Concorde in section "Nozzle area control during dry operation".

That adjustable nozzle provides thrust vectoring. This is most effective at the rear of the plane far from the center of mass, where they provide assistance with pitch and yaw.

So with the under-wing engines it would only help with roll. Pitch and yaw are not helped in that configuration and the existing ailerons are more than enough for that.

The mechanism is a complex and heavy mechanism that needs maintenance and extra fuel to bring along.

Most (all since the concorde) commercial aircraft are subsonic fliers where the change in atmospheric conditions doesn't change the effect of nozzle area enough to warrant the added complexity.

One thing so far not mentioned or considered is that as the jet pipe nozzle changes area the static pressure within it will change. Consequently the differential pressure across the L.P. turbine (assuming a twin or triple spool engine) will also change. This speeds up or slows down the L.P. compressor.

So you ask, "Why do jet engines with afterburners use variable area nozzles?"

Such engines might be for military or commercial use, but are used to propel the aircraft to supersonic. The Concorde was an example of a non-military supersonic aircraft, the engines on which were afterburning.

There is one basic reason why the nozzle area changes, and it is "to maintain engine airflow."

During dry operation at 'military power', the engine is at it's design point, at 100% compressor speed, & turbine design point if the compressor & turbine are designed to have a good match point (thermodynamic & aerodynamic).

If the afterburner is started, then the total temperature into the nozzle, Tt8, increases sharply. Suppose the temp doubles?
then Sqrt(2·Tt8) = 1.4·Sqrt(Tt8), and you have 1.4 times the choked flow parameter at the throat.

What happens next? An engine surge if the FADEC (Full Authority Digital Electronic Control) tries to maintain compressor rotor speed by increasing fuel flow to the burner in order to increase turbine output. Actually, this could result in a turbine over-temp, so the FADEC has to cut back on the demand.

As well as lighting the afterburner causing Tt8 to increase, it causes a decrease in Pt8 ... there is a drop in pressure that is due the heating. This is a Rayleigh process, and accounts for the 'hot losses'. In an A/B (afterburner), there are frictional or cold losses, but these are minimal in comparison to the hot losses. These total pressure losses also cause the flow parameter to increase, as Pt is in the flow parameter denominator, and contribute to the loss in airflow.

The solution to the problem of higher Tt and lower Pt that restricts nozzle flow is to increase the nozzle area -- then all of the engine's other components are happy. Also happy is the pilot who is chasing or being chased by an adversary, and who doesn't want a missile fired up his tailpipe because his engine quit on him.

About the divergent section of the nozzle - it is to expand the gasses to near ambient, and obtain some more thrust in doing so.

36
Why do gases in the combustion chamber only flow one direction to the gas turbine in a jet engine?
17
Why do most military aircraft use different engines than commercial aircraft?
32
Why does afterburner exhaust have “pulses”?
29
Are the fastest moving pieces of a jet engine supersonic?
16
Why do military turbofan engines use a low bypass ratio?
11
What is a ramjet?
10
Can a convergent nozzle be used for a supersonic jet engine?
15
What is the significance of the speed of sound to aerodynamics and aircraft design?
15
What are the differences between pre-transistor and transistor era jet engines?
8
How does a supersonic jet engine differ from a subsonic jet engine?
see more linked questions…

1
WHY does a jet engine work?
29
Are the fastest moving pieces of a jet engine supersonic?
9
What is the maximum theoretical lift of a plane as a function of engine power and surface of the wings?
4
Why is max power time limited for jet/piston engines?
25
What does the actual path of air within a turbojet engine look like?
8
How is bleed air used to start a jet engine?
1
How does the fan in the jet engine suck in air while the engine is stationary?
18
Why do airplanes use an axial flow jet engine instead of a more compact centrifugal jet engine?