Why are fighter jets so loud when doing slow flight?

Going to air shows I noticed that when fighter jets did slow fight, it was just as loud as high speed passes. Why is this?

When fighters are going slow they still need to generate enough lift to maintain level flight. This is done by increasing the angle of attack, and coincidently 100% of the time the induced drag also increases. (but don't confuse this with a cause/effect relationship!)

As induced drag increases, more thrust is needed to overcome it. This is called operating on the "backside of the power curve". At some point almost full power is needed just to overcome the drag and maintain level flight, which is why you hear the noise.

There are lots of questions and answers dealing with drag curves that will help you understand this on a deeper level if you are interested.

This regime has a name on the "Power Curve", it's called the "Region of Reverse Command". It's called that because as the aircraft goes below a certain speed, it requires an increasing amount of power the slower you go to retain the same amount of lift.

Being in this area of the curve can be quite dangerous, and getting outside the backside of the curve is often referred to as "being behind the curve", and is actually something I think about somewhat frequently.

I was out flying one day with my SO and two of our friends in a 172, it had a STOL kit and 160HP conversion, it also wasn't a particularly high density altitude day (this may have saved our lives). They really wanted to check out their house from above like most first-time plane rides. We cruised up there and they called their kids out of the house to come wave from the cul-de-sac.

In order to loiter I set the plane up for slow flight like I'd practiced countless times (I actually really enjoy chugging around like this), tossed in some flaps (don't remember now how much exactly), and throttled back and pitched to bring 'er down into the laid back position that a plane takes at that point in the curve. As the speed slowed I laid into the throttle to keep us a handful of knots above stall and orbited the house for a few minutes while watching the altimeter like a hawk and they had a good ole time trying to yell out the windows.

Why would the plane's mods have saved our lives? Well, while I was above the required "safe" altitude for the area, one thing that I hadn't taken into account is how much the stall speed changes at the wing loading with 4 adults in the thing. If I hadn't had the extra headroom afforded by those mods, I may have gotten into a point in the power curve where powering out of the reverse control regime before hitting the ground wouldn't be possible. This realization is why it's indelibly burned into my mind.

This is one area of flight where remembering "pitch controls airspeed, and throttle controls altitude" can be a literal lifesaver. 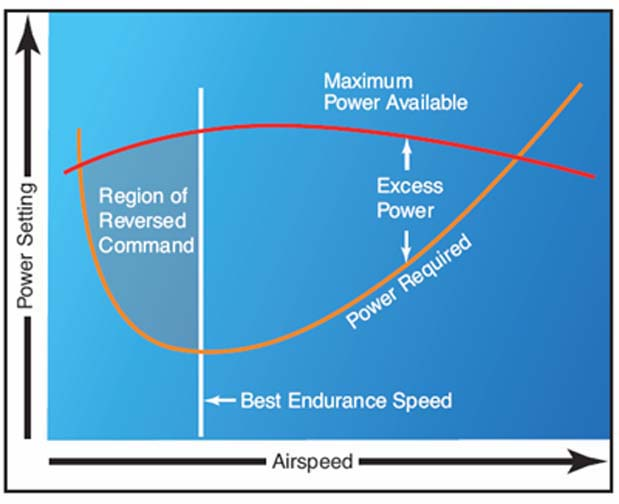 At very low speeds, with a high AOA (angle of attack), they are using a lot of the thrust to just hold it up in the air, rather than lift over the wings.

9
Why do winglets reduce maneuverability (of fighter jets)?
43
Why do many fighter jets have double vertical stabilizers?
54
Why are fighter pilots seated and not reclined?
5
When did fighter jet designers stop prioritizing Whitcomb's Area Rule?
3
Do fighter jets experience angles of attack greater than stall when initiating a zoom climb?
0
Why do fighter jets make a whistling noise when landing and taking off?