What is the relationship between thrust and engine RPM in a turbojet?

I understand that, to increase the thrust of a turbojet engine in flight, it is necessary to increase fuel mass flow rate. This throttling then increases the exit velocity of air and gives increased thrust (if this was wrong, please also explain how is the thrust practically changed in cruise).

How does the engine RPM vary in this process?

Is there an equation which binds together spool RPM to the thrust?

First, lets see how thrust works. NASA explains it pretty good. They conclude that for turbo-fan engines "specific thrust [...] depends only on the velocity difference produced by the engine." If you think about it, velocity difference in a gas is dynamic pressure. So, how much thrust the engine will generate depends on how big of a dynamic pressure difference it can create in the air between its front and back. A turbo-fan engine creates this pressure difference in two ways. One is by using a fan to "push" air to the back. The other one is by heating up the air that passes through its burner and shooting it out of the nozzle (after passing it first from the turbine.)

Now, on to your question. We need to see if added RPM creates added thrust (or if more thrust needs more RPM.) The answer is that, yes it does. Providing the engine with more fuel will create faster escaping hot gasses from the burner. Those will create a bigger dynamic pressure difference between the burner and the nozzle and the turbine will turn faster. Power from the turbine is moved to the fan which will also turn faster thus pushing out more air.

Refer to here for a graphical description of the engine compartments and how pressure is formed between them.

How RPM and total thrust for a model turbo-fan engine are related is graphed on page four and seven of this document. There you can also find various equations that describe those graphs.

EDIT: A turbo-jet engine works pretty much the same but instead of using the power generated from the turbine to mainly move the fan, it uses it to move only the compressor. All its thrust is generated from the hot gasses coming out of the nozzle.

The relationship: non-linear. I know that at least for early jet engines (yes, I am that old.) 90% of the thrust was in the last 10% of RPM.

These engines also spooled up slowly. We were told to fly approaches at 70% RPM, because at that RPM, there was essentially no thrust. To go from idle to 100% took about 5 -6 seconds: most of that time getting to about 70%.

Go-arounds had to be planned well in advance.

A turbojet works by compressing air, heating the compressed air while keeping pressure almost constant, and running this heated air through a turbine which will expand it again. The work done while expanding air in the turbine is needed to run the compressor, and the heating in the middle is needed to add enough energy so the turbine will spin and the gas leaving the engine will still have more impulse/momentum (speed times mass) than the air which entered the compressor. At the end of this process, the air leaving the turbine will turn the remaining pressure into speed in the exhaust nozzle, so the gasses leave the engine at a higher speed, but the same pressure with which they entered the engine.

Adding more fuel to the combustion will increase the heat and speed of the gasses entering the turbine, so more work can be done here. This excess work will speed up the turbine, and with it the compressor, so more air gets pumped into the combustion process, until a new balance has been attained where the heat energy added in the combustion will just be enough to keep the engine spinning at its new speed. RPM and fuel flow go up and down together, but within strict limits and not linearly. Increasing fuel flow when the intake cannot provide more air, or increasing it too quickly to allow for spinup, will lead to a compressor surge, flow separates at the compressor blades and mass flow through the compressor collapses. Shortly after, the turbine will start to melt from the excessive gas temperature. To avoid improper throttle commands, modern jet engines are filtering commands through a computerized control system, so the pilot has fewer opportunities to screw up.

Every stage of the compressor adds a pressure increase, and faster rotation speed means more air throughput and an increased compression ratio. By spinning faster, the compressor can increase the pressure in the combustion chamber and increase mass flow, diluting the fuel-air mixture. Now the air entering the turbine flows faster but is cooler, because the same amount of fuel has to heat up a higher air mass per time. The turbine works like a compressor in reverse: After each turbine stage the air is expanded and cooler than when it entered this stage. The turbine will spin as fast as the energy given off in the expansion process allows it to turn the compressor, and the mass flow and entry temperature determine how much energy is available.

The rotation speed of the turbine at idle is roughly 50% of the speed at full thrust. The relation between thrust and RPM is rather complex, if you want to study it, I recommend simulation software like GasTurb.

How does the engine RPM vary in this process?

It is safe to say that in most operating conditions the shaft-speed will increase with higher thrust settings. Here is why:
When we look at a very simplified version of the processes in a jet-engine, increasing fuel-flow will increase temperature in the combustor. This will push point 4 to a higher T. 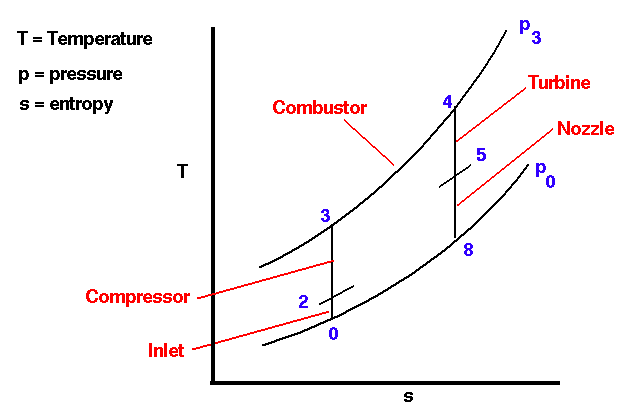 At first the turbine will consume the same amount of energy. This means the »distance« between point 4 and 5 will stay the same. Finally, this means the »distance« between point 5 and point 8 is bigger. In a T-S-diagram the distance is a measure of energy stored in the air, so there is more energy in the air exiting the nozzle so the jet will be faster and this will increase the airspeed. BUT, another thing is happening as well, actually it is happening simultaneously but a bit slower: since the air is hotter at the turbine entry the turbine will also extract more energy from the hot air and will therefore speed up. Which leads to a higher speed in the compressor as well, which leads to your second question.

Is there an equation which binds together spool RPM to the thrust?

The short answer is: No
But, actually it is not that easy. There exits no single equation for the engine but a system of equations. The character of this system is non-linear an holds a large number of parameters (e.g. compressor- and turbine-efficiency curves) which are sometimes unknown and need to be measured during an experiment.
However, it is possible to perform experiments and reduce the number of parameters and build correlations. Which is done regularly in order to model engine performance or control the engine.
I am not entirely sure what kind of »equations« you were referring to in your question. Because in principle correlations are equations as well but one needs to fit those correlations based on experiments to determine the parameters which you cannot know in advance.

The above is a very simplified view on a jet-engine. Depending on the type on jet-engine there are a lot more settings which influence the engine-behaviour: for example the Variable-Guide-Vane-Actuation-Law, or the Bleed-Air-Schedule, or the Cooling-Sytem of the casing. They all contribute to the complexity which make a »simple equation« impossible.

Of more importance to the pilot in monitoring engine performance is the Engine Pressure Ratio (EPR) gauge.EPR is a ratio of compressor inlet pressure against exhaust pressure which shows the efficiency of the propulsion process front to back. EPR is measured in percentages, 100% being maximum thrust required to take off safely at a given aircraft weight, runway length and under prevailing weather conditions.

Also of interest is the performance at a given fuel flow as measured on the fuel flow meter. RPM monitoring is of relatively insignificant performance provided max speeds are not exceeded during take off power. A high life almost worn out engine will not be able to produce its required take off EPR on a hot day, fully loaded aircraft on short runway without exceeding either TGT or RPM max limits. However, the same engine may produce sufficient EPR on a cold day, light loaded aircraft on a long runway. Pilots of 1970,s generation engines had to refer to charts when selecting "TAKE OFF EPR OF THE DAY". Modern FADEC engine controls make all the calculations and adjustments automatically.

thrust is directly proportional to the RPM and the Formula is Thrust~(RPM)^(3.5). so if rpm increase thrust increases.

0
Is this the relationship between rpm and thrust of a Turbofan?
9
What is the relation between throttle position and engine thrust for a turbofan?
4
Jet engine throttle-down time
3
Does intake mass-flow rate vary linear proportional with turbine fan speed?
1
How does fuel flow and altitude affect the compression ratio of jets?

9
What is the relation between throttle position and engine thrust for a turbofan?
8
Is there a relationship between turbojet engine rpm (N1 & N2) and fuel consumption rate?
4
What equation describes the relation between engine thrust and EPR?
12
How (and why) does engine thrust change with airspeed?
4
Does the P&W F100 turbofan engine of the F-16 really produce this much power?
1
How do power and thrust curves compare?
2
Need help with calculation of engine airflow and jet velocity and efficiency