Do aircraft pitch down even at very low angles of attack (below 0°) in a strong sideslip?

I was doing an analysis of an aircraft (specifically the PZL Koliber 160 with the NACA 63A416) strong sideslip conditions (beta=30° for example) in OpenVSP at various angles of attack, and observed that there's a rather strong pitch-down moment even at an angle of attack of -10°. Is that correct, or do I have to go on a long bug-chase in my OpenVSP model ? If it is correct, what causes this ?

P.S.: I did read this post, but my aircraft has a traditional low tail, not a T-tail.

Edit: I see from the comments and answers I got that my question might not have been clear enough. So - it doesn't matter why the aircraft is flying at alpha=-10° beta=30°, simply assume this as a steady attitude - since that is what OpenVSP does when told to calculate coefficients for that attitude. My only goal is to find out whether the OpenVSP results (specifically the alpha-induced pitch moment coefficient or $Cm_{alpha}$) are valid and thus usable for the FDM of a flight simulator model - that doesn't care either, whether I got into 30° beta by a wind gust, asymmetric thrust, crossed controls or whatever !

As John K was alluding, AoA of -10 or -15 are not really practical and do not correspond to a powered dive like you think.

Even in a descent or a dive, most aircraft will have positive AoA.

You are likely confusing deck angle, angle of attack, and flight path angle.

Angle of attack (alpha) is the angle between the aircraft reference line and the velocity vector.

Flight path angle (gamma or theta) is the angle between the velocity vector and the horizon.

Deck angle is the angle between the aircraft reference line and the horizon. It is the sum of AoA and FPA.

In a descent or dive, you have a negative flight path angle. If your descent is steep enough, you may even have a negative deck angle. You likely still have a positive AoA.

For negative reasonable angles, cos(theta) is positive and even close to 1.0. At negative 10deg, cos(theta)=0.98. In that 10deg descent, your CL is 98% of what it is in cruise! If your aircraft has symmetrical airfoils and no incidence (i.e. CL=0 at alpha=0), then your descent AoA is 98% of the cruise AoA. Most importantly, it certainly has the same sign.

It is sometimes counter-intuitive, but climbing, descending, and turning can be treated as 'steady' maneuvers. For climb and descent, steady means that the accelerations are zero.

Being in a steady climb/descent is separate from the dynamic process of initiating that climb or descent. That dynamic process is considered maneuvering flight -- unsteady flight.

It is possible to reach negative AoA during a maneuver in a way it is not possible during steady flight. So an aircraft may experience negative g's during the push-over to initiate the dive -- but in the steady dive, the aircraft experiences flight very similar to level flight.

It would seem unusual for a conventional aircraft to exhibit the characteristics you describe.

Sideslip should have small effect on pitching moment.

A stable aircraft should have a dCM/dCL that is negative -- which implies that at negative alpha it should have large positive CM.

A very quick VSPAERO run on a wing/tail combination shows this. 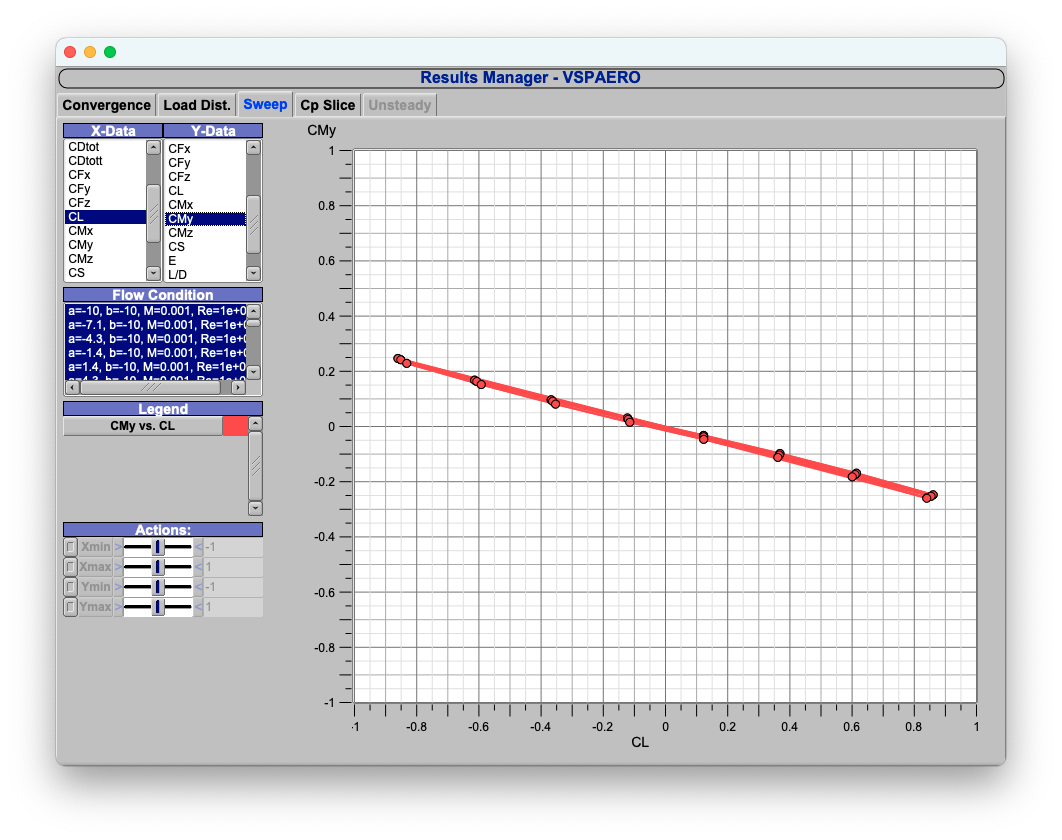 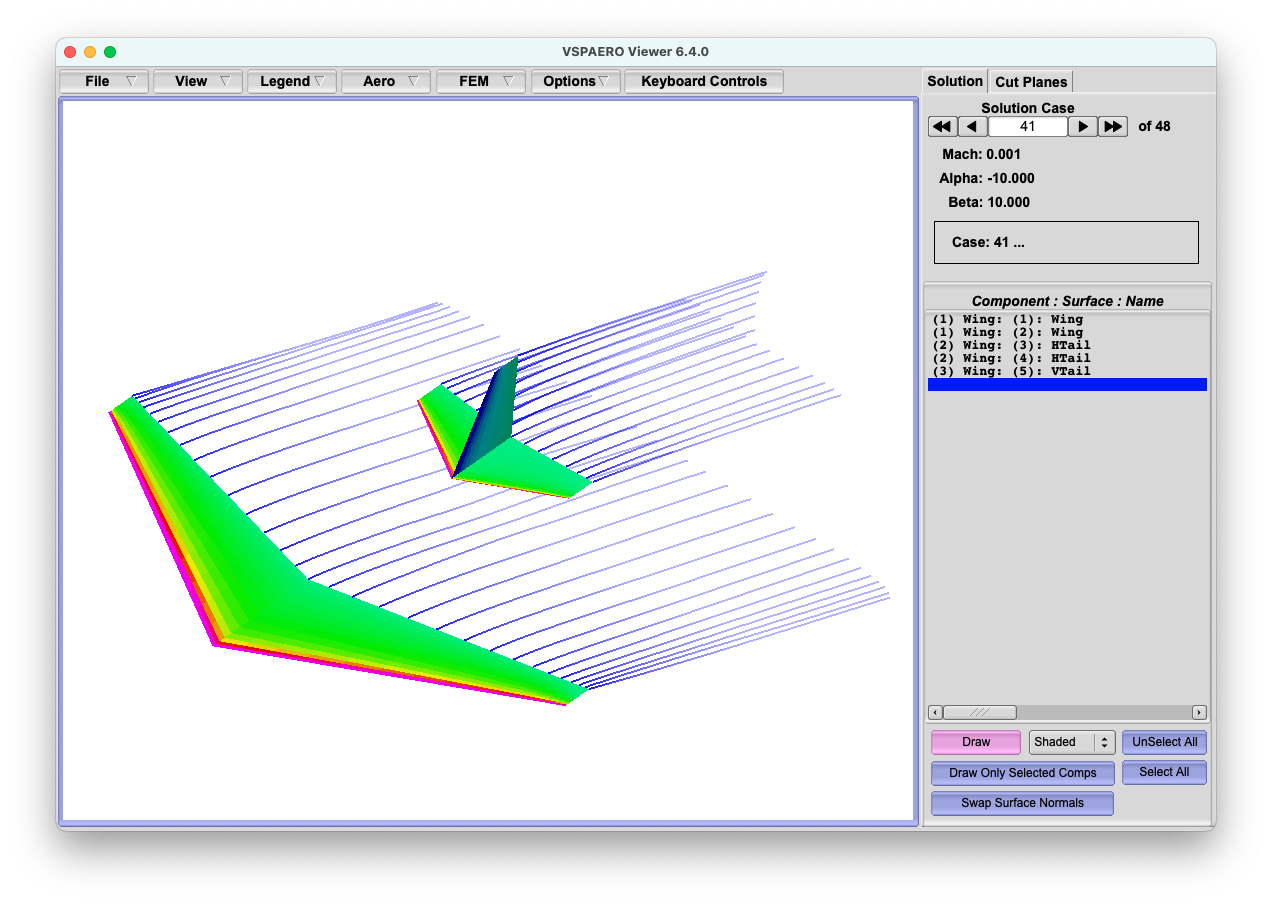 When building your VSPAERO solution, start simple and build to complex.

A better place to ask OpenVSP questions is on the OpenVSP Google Group.

Based on comments as well as original post, the core question appears to be

"is it normal that an aircraft continues to pitch down very fast even at -10° alpha, in a strong sideslip (> 10°) condition ?"

If you are initially flying more or less upright, and then go to an angle-of-attack of minus 10 degrees, yes you will pitch downward very strongly, regardless of what you may or may not be doing with the rudder to create some slip or skid! You'll note that you are hanging from the seatbelts, with your head tending to hit the top of the cockpit or canopy, as the aircraft begins an outside (downward and earthward) loop.

On the other hand, if you are trying to ask if an aircraft will normally experience a strong nose-down pitching moment even with elevator in a normal cruise position if the angle-of-attack is somehow temporarily perturbed to minus 10 degrees, while the aircraft also happens to be sideslipping-- that is an entirely different question. It would surely be relevant to specify whether the sideslip is caused by deflection of rudder, deflection of ailerons (i.e. via "adverse yaw"), both, or neither (e.g. caused by a sudden transient gust from the side.)

26
Why does a T-tail produce a pitch-down moment in sideslip?

26
Why does a T-tail produce a pitch-down moment in sideslip?
13
Why does an aircraft pitch up when the speed increases?
8
How does bank angle differ from roll angle with respect to stability in fixed-wing aircraft?
2
How to calculate variable pitch propeller parameters?
3
What factors are included in the moment coefficient of a wing?
0
Procedure for simulating nonlinear flight dynamics
0
Does thin airfoil theory work at very high angles of attack?
4
Relationship of propeller RPM, blade pitch, and drag at very low blade pitch angles
9
Can flaps be used to perform rotation and flare?
16
Why do airplanes usually pitch nose-down in a stall?