Was this bumpy Boeing 777-300 landing caused by windshear?

I was watching a Video of a Korean Air 777-300 landing at Narita International Airport (IATA: NRT). The Comments on the YouTube Video are again unprofessional.

Looking at the windsock which appears in the right bottom corner at 0:12 and remains visible for about 4 seconds, you can tell there is little wind, not what you would associate with wind shear.

I want to ask here, what caused this very bumpy landing?

It is always hard to judge the actions of the pilots without knowing what was going on in the cockpit, and what control inputs were given. But by looking at the position of the control surfaces I am fairly sure that this is a case of Pilot Induced Oscillations. I.e. the pilot tries to correct a disturbance but his efforts cause the aircraft to overshoot to the other side of the desired attitude, leading to an increasing series of corrections in opposite directions.

It seems to me that the flare is a tad early, causing the aircraft to float over the runway. At the same time several cycles of alternating roll inputs are given, causing increasing oscillations. I could distinguish at least 3 full cycles before touchdown. Every cycle is a bit stronger than the previous one.

The last right-wind-down command before touchdown is strong enough for all the starboard spoiler to deflect. This, combined with the low speed due to early flare causes the right wing to loose most of its lift. The aircraft touches down hard on its right gear first. At the moment of touchdown, the roll command is strongly left wing down as can be seen from the spoiler extension on the left wing. With almost no lift on the left side and standing on the right gear, the aircraft rapidly rolls to the left.

The left roll is then counteracted again with right ailerons up but too late; the right gear lifts of again. When then right gear touches for the second time, still a right wing down command is given, causing the right roll to continue.

This process of chasing the roll is continued and mixed with similar behaviour in pitch. 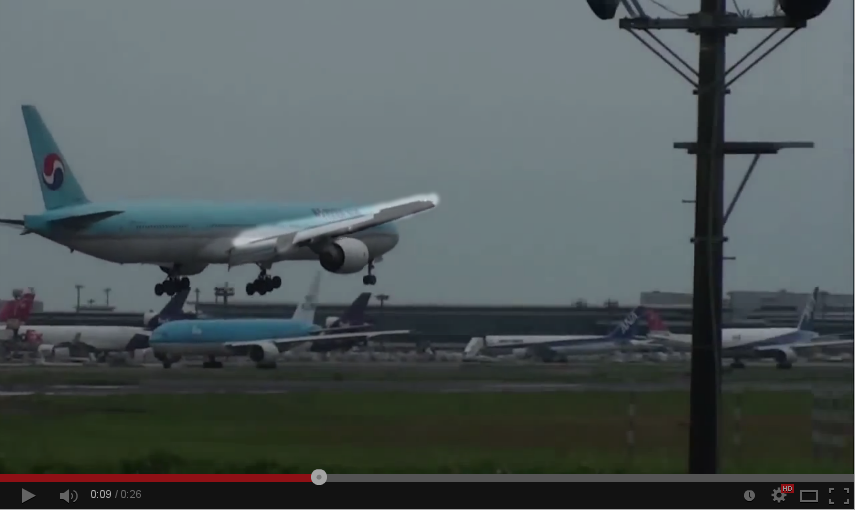 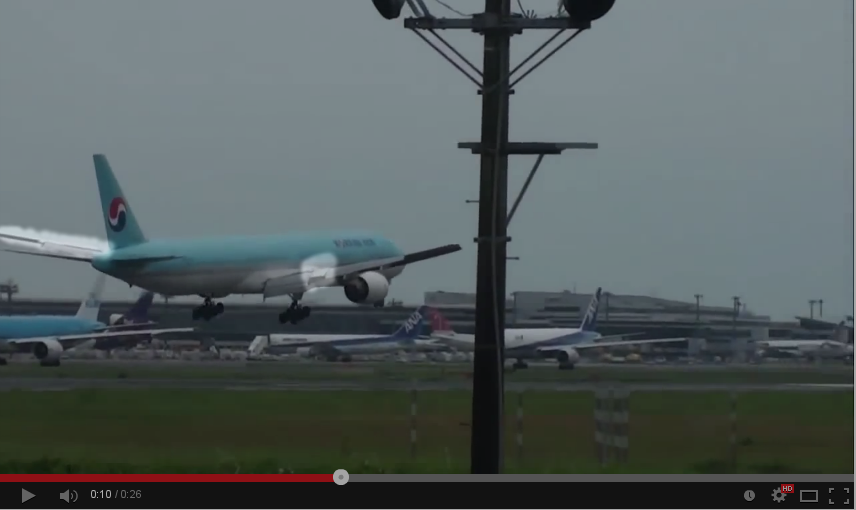 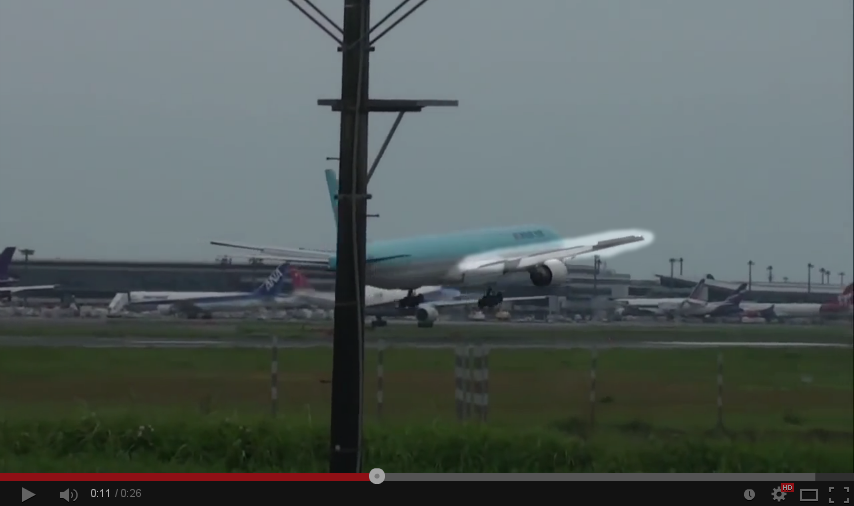 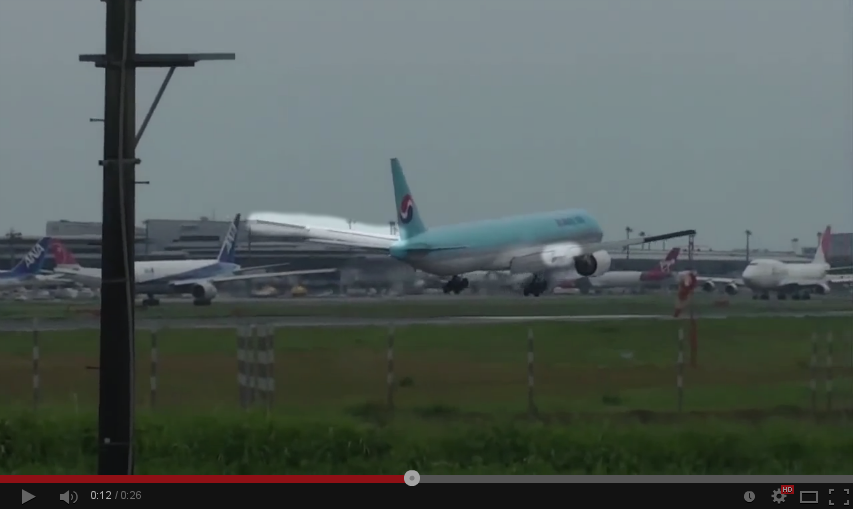 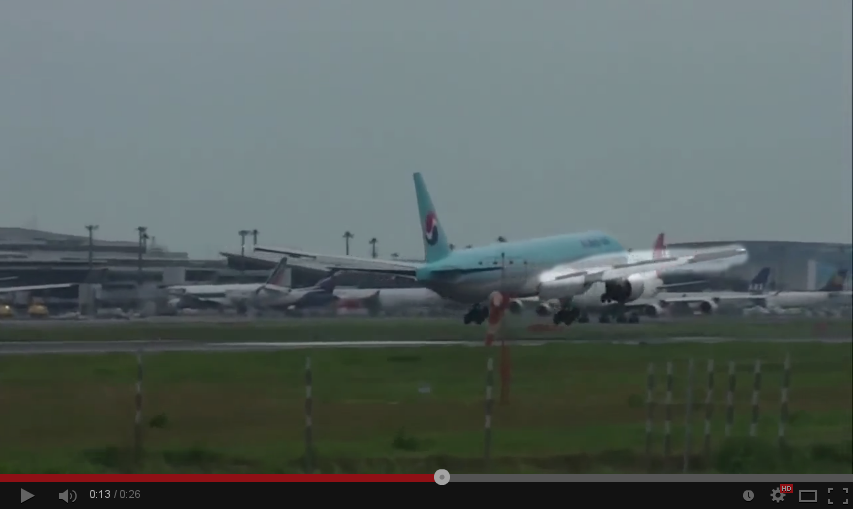 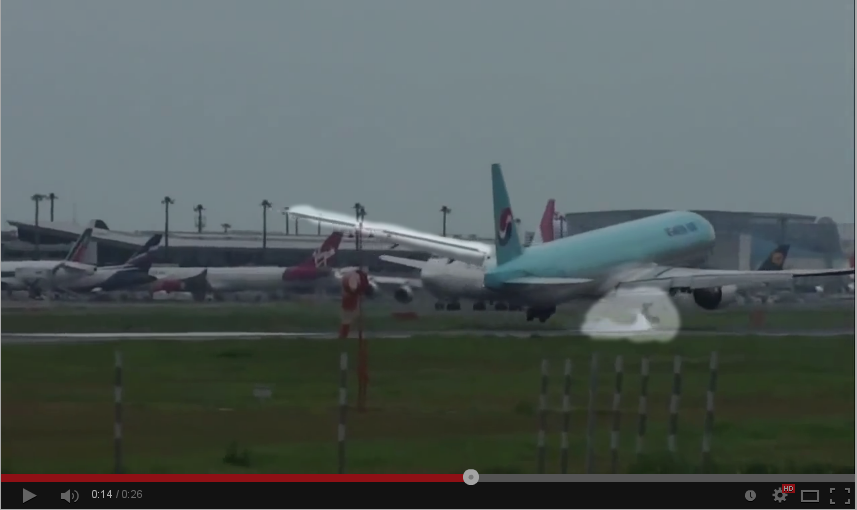 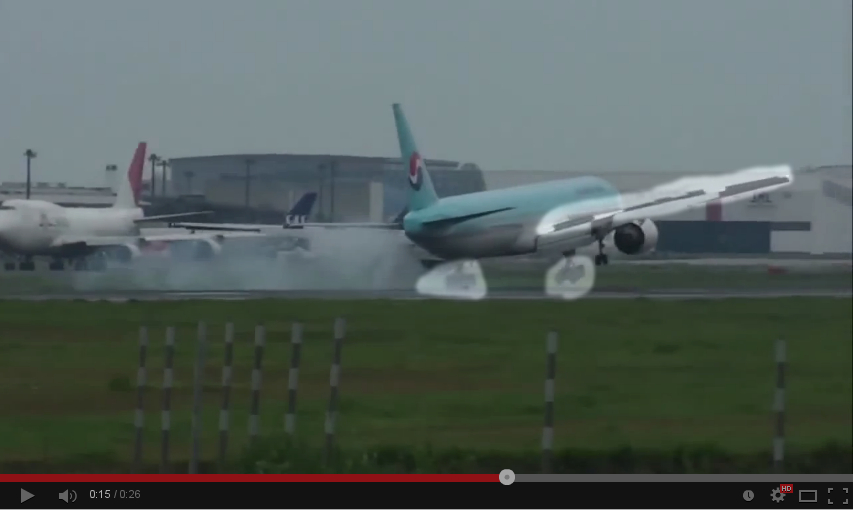 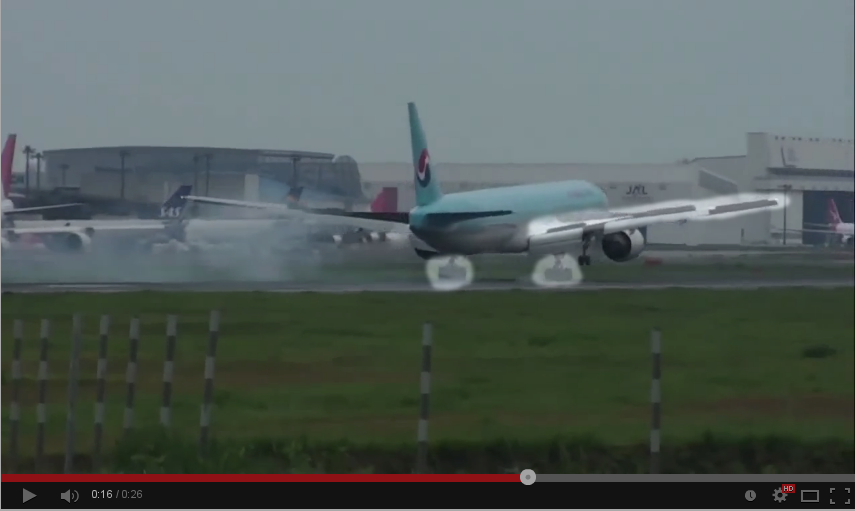 Halfway the roll to the right, all main wheels are on the ground. Instead of damping the roll by left deflection, a right roll is still commanded.

This continues down the runway, also combined with pitch oscillations. Every time the pilot corrects, he is essentially too late to damp the oscillations.

If a hard landing is made, the aircraft will detect that by itself and will send a report to maintenance if a hard landing check is required. See this published patent application.

How did it happen?

I watched the video closely and coordinated the movement of the ailerons with the motion of the plane.

It appears to me that there was a strong gust from the left moments before touchdown. As a result the left wing is lifted by the crosswind and the aircraft, still in the air, side-skid to the right. Exactly when the right main gear touches the ground, the gust dies down and the pilot has input left aileron to counter the roll. This initiated the bouncing sequence.

In all the subsequent bouncing, the pilot was trying to determine how much left aileron is necessary to counter the crosswind. The technique is correct, but the crosswind now is much weaker than it was 2 seconds ago; he also had to level the wings which are rolled left at this point. Unfortunately the rhythm he applies correction matches with the rhythm the plane bounces, resulting in a brief pilot induced oscillation.

I agree with RedGrittyBrick - I wouldn't call the gust at an altitude of a few feet a wind shear.

In some airplanes the g-meter needle stops at the peak value during the flight. If it exceeds a certain threshold, a check is required. I'm not a real life 777 pilot, but my knowledge of the 777 does not recall such an instrument in the cockpit.

Required or not, good airmanship should lead the crew to write this down in the maintenance log for ground engineers to review. Personally I don't think this was a particularly hard landing that would lead to bent parts, though my instructor would remind me: "when it doubt, take the safe way".

what caused this very bumpy landing?

It looks like it was initially triggered by a sudden change in crosswinds, a strong gust, perhaps a microburst?

It looks like the pilot then had trouble correcting for the bounce of the right side undercarriage at the same time as dealing with the crosswinds lifting the wings while simultaneously keeping the aircraft aligned on the runway.

From what I've read, the term wind-shear is mostly used of sudden differences in wind direction and speed at different altitudes, it wouldn't apply a few feet above a runway. It could be a downburst or microburst though - they are related phenomenon.

I've read that the airline ground-crew can read-out the G-forces experienced during landing and vertical speed at touchdown. If certain thresholds were exceeded, checks would be carried out.

Airlines are required by ICAO to use Flight Data Monitoring (FDM) to improve safety.

That landing wasn't pretty, but I wouldn't describe it as hard to the point of damaging the aircraft. A bit firm, followed by some oscillation is a better description. Not something that would warrant a maintenance inspection in any case.

One thing about oscillations is that you can often make them worse by using control inputs to even them out. It's usually better to ride them out, which is what looks like is happening in this case. Remember that the aircraft is not out of control just because it bounces.

If you do enough landings one is eventually going to get ugly even if you've set everything up right. You have a good approach speed, set up a good flare, then suddenly the whole thing drops onto the surface and next thing you know you're skipping down the runway like a flat stone. This is rare in clear air, usually this happens when there is a crosswind which has blown across some structures which have caused pockets of lower air pressure.

Not the answer you're looking for? Browse other questions tagged wind boeing-777 or ask your own question.