How do you properly enter the NDB34 published approach at Friday Harbor (KFHR)?

I'm having trouble figuring out the correct procedure to enter an approach such as: 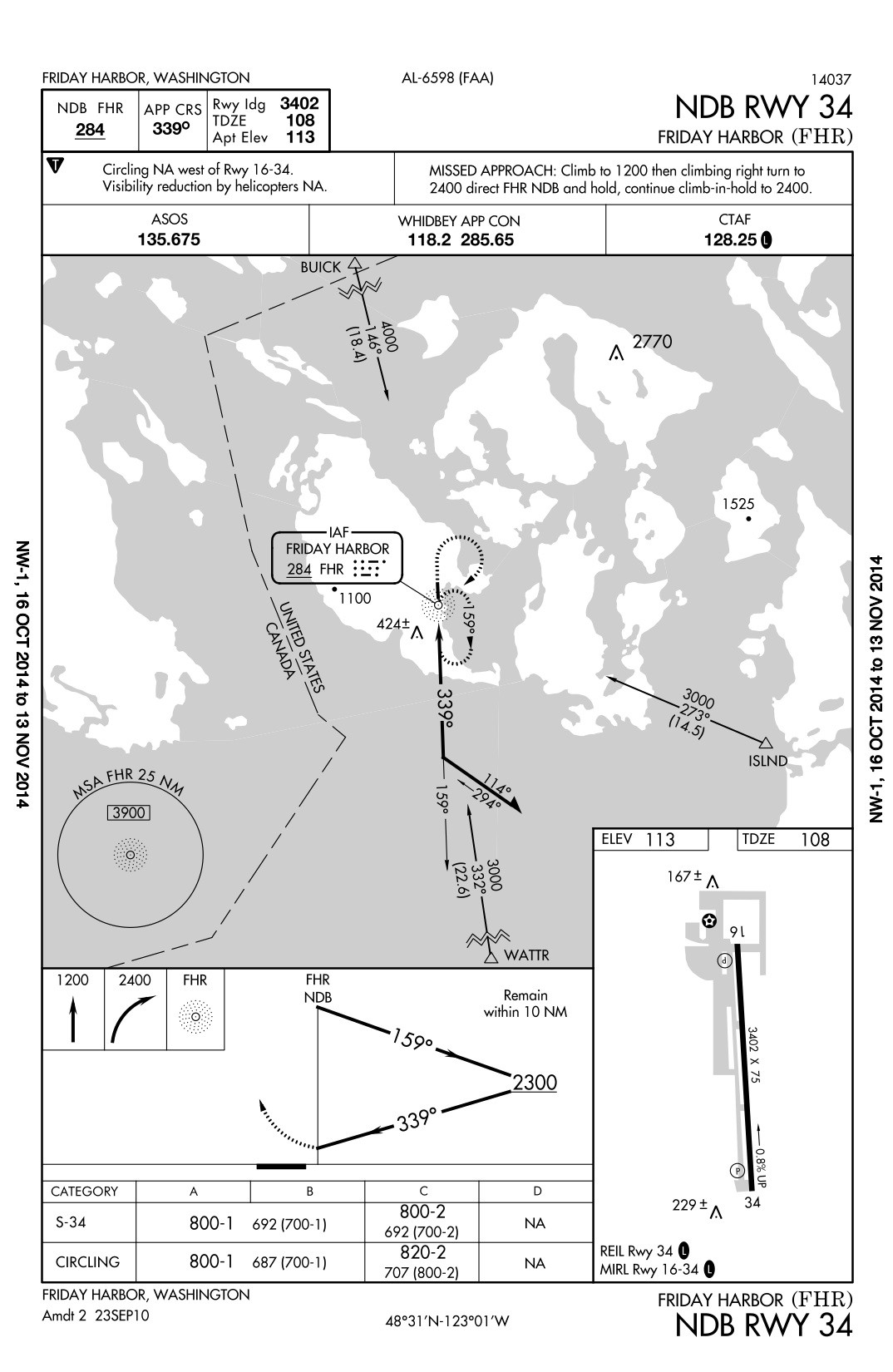 Let's say you are cleared from ISLND for the NDB approach. How do you maneuver safely and legally to the the outbound leg once you reach the IAF?

First of all, do not let the depicted holding pattern confuse you. It is only there because the missed approach procedure happens to have the hold at the same place, and for the purposes of the course reversal may be ignored.

In this case, you have options because the course reversal is simply a "barbed arrow".

On U.S. Government charts, a barbed arrow indicates the maneuvering side of the outbound course on which the procedure turn is made. Headings are provided for course reversal using the 45 degree type procedure turn. However, the point at which the turn may be commenced and the type and rate of turn is left to the discretion of the pilot (limited by the charted remain within xx NM distance). Some of the options are the 45 degree procedure turn, the racetrack pattern, the teardrop procedure turn, or the 80 degree 260 degree course reversal. Racetrack entries should be conducted on the maneuvering side where the majority of protected airspace resides. If an entry places the pilot on the non-maneuvering side of the PT, correction to intercept the outbound course ensures remaining within protected airspace. Some procedure turns are specified by procedural track. These turns must be flown exactly as depicted.

In other words, do what you want as long as you either stay on the protected side or correct to intercept the outbound course if you find yourself on the non-maneuvering side and you stay within 10 miles of the NDB.

However, as I said in the beginning, you can do it however you like within the constraints that the AIM gives.

I did find a rather interesting article which states that ICAO rules are a little different, but I won't go into the specifics since this is an FAA chart. For those who are curious though, take a look at it here: Course Reversals.

Since the NDB is the only navigational reference, you don't have much choice but to fly right over it.

So, ISLND direct FHR, turn right and intercept 159 FROM, as indicated. Once you're established on the 159 FROM, do the procedure turn exactly as shown, and stay within 10NM of the NDB.

Notice all maneuvering is to the east of FHR, that's the "safe area," since there are two obstacles on the west side @424ft and 1100ft, as well as the Canadian border.

I'll try to explain in a more easy way.

I think, Dotted line was used for Go Around Procedure.

(Sorry if my english is not perfect)

Edit : A friend gived to me a Jeppesen Chart of KFHR (maybe outdated, but very close to your chart), but i only display a little part of the chart 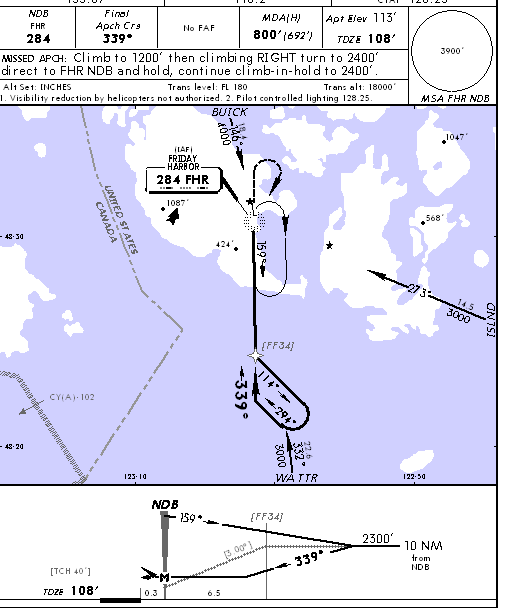 Not the answer you're looking for? Browse other questions tagged iaps instrument-procedures or ask your own question.

12
What is the correct holding altitude for the missed approach at Unalaska (PADU)?
27
If there is a misprint on an instrument plate, is a pilot required to comply with it?
12
When cleared for an approach and not on vectors, is a depicted course reversal always required?
13
When flying a circling approach, is it permitted to begin the visual circling segment prior to the final approach fix?
12
How do I tell a Garmin 430 not to exit a hold?
19
During instrument approach, is an abbreviated racetrack course reversal allowed?
13
Why is a procedure turn required if you are more or less on the final approach course?
4
What does it mean to fly a procedure turn?
4
How should one fly the entry procedure to an approach when the hold is not aligned with the outbound course?
3
Are you required to fly a full hold when doing a course reversal?