What would a TLS approach plate look like? I have ForeFlight and can also get stuff off the FAA website. However, I do not know what airports to look at for approaches. I did try looking at Columbus Gorge Regional Airport (KDLS) as I have seen ANPC saying that airport has their equipment at it.

Does anyone know of any US airport that has a published TLS approach that I can look at for a plate?

In 2011, the only TLS in the US was a test system in Atlantic City:

The only civilian TLS in the United States is a Federal Aviation Administration (FAA) test system at the agency’s technical center in Atlantic City, New Jersey. However, although the FAA in 1998 certified the TLS as at least meeting ICAO standards for Category I ILS signals and in 2001 granted type acceptance to ANPC’s TLS, the systems are not likely to be widely used in the United States.

In recent years, the FAA has instead emphasized the development of instrument approach procedures using the wide area augmentation system (WAAS), a space-based navigation system with a ground-based network of reference stations and master stations that the agency says will not only enhance safety by adding precision-like approach capability but also eliminate the need for installation and maintenance of local airport-based approach equipment.

I couldn't find any current civilian TLS approach in the US, so most likely none were installed. The approach chart would however look like an ILS chart:

Pilots fly a TLS approach just as they would an approach using an ILS, ANPC says, so “to the pilot, there is virtually no difference.” For example, TLS approach charts look like ILS approach charts; a failure of ground-based equipment to provide lateral or vertical guidance results in a red flag on a cockpit instrument, as it would in an ILS or other instrument approach; and a TLS approach always includes a missed approach procedure — although the TLS itself does not provide missed-approach guidance.

I found an old picture of the TLS chart at Atlantic City (but I cannot find a current one, maybe it was removed there as well): 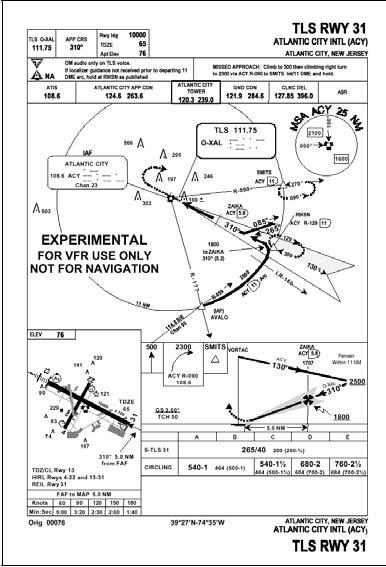 However, in a book (at this website) on the last page of the chapter, figure 12-11, the author shows a TLS instrument approach plate that is highlighted "EXPERIMENTAL for VFR use only not for navigation." This Instrument Approach plate is for Atlantic City International Airport (ACY).

Here is the image of the TLS approach from the book noted above: 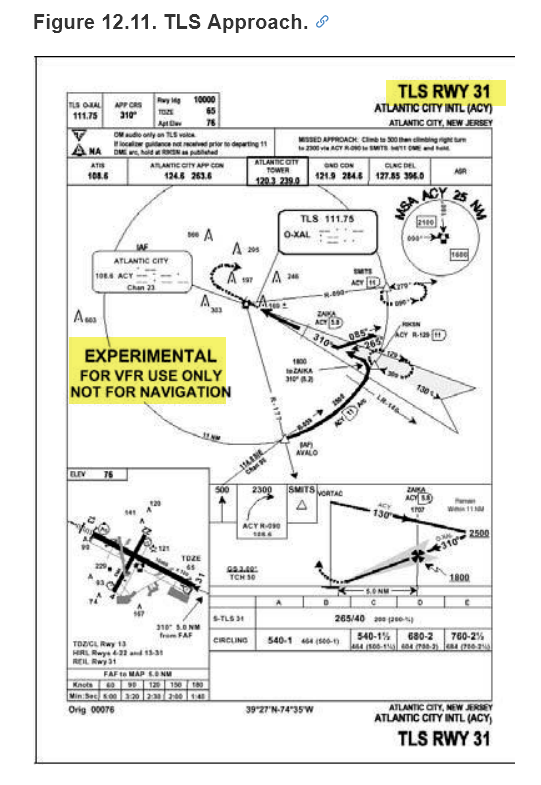 14
Do instrument approach procedures sometimes have a minimum temperature?
11
What does Alternate NA mean on an approach plate?
15
Can I circle to a different runway if cleared for an instrument approach without circling minimums?
9
What are the US flight planning regulations for an alternate airport?
9
What prevents the use of a multi-segment ILS for non-straight approaches?
0
Why is the ILS16 approach at KSKF not available in my Garmin 430W?
1
Can Instrument Approaches be carried out when RVR is not given for the full runway length? (Approach Ban)
1
GPS-based IAP at alternate airport