What is the purpose of the inlet doors of the Pratt & Whitney JT3D?

I have a question about the 707 Engine Inlet Doors, according to Wikipedia the Pratt & Whitney JT3D inlet doors purpose is to provide additional air. Is the thrust higher on more air intake? And why modern engines don't have it anymore?

The intake speed at the compressor is between Mach 0.4 and Mach 0.5 and changes little with airspeed. That means that at low speed the intake has to suck in air from a wide capture area, (even from behind the inlet lip at low speed) while at high speed only the part that flows into the center of the intake is digested, while surrounding air will spill over the intake lip and flow around the nacelle.

The surface that separates the flow going into the engine and that which does not is called the stagnation stream line or surface. This surface is way aft of the inlet lip at low speed, and the pressure near it is the highest (stagnation pressure). The challenge for the inlet designer is to design the lip with a rounded shape so that the flow going into the engine is uniform. It won't be if the lip is as shaped in the sketch. The high pressure on the outside and the low pressure inside the lip open the doors to admit a small percentage of the air to the engine inlet at low speed. As airplane speed increases, the stagnation point (or line) shifts to the lip itself and the pressure equalizes on the doors, closing them. 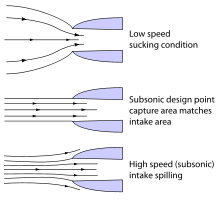 The fairly sharp intake lip of the JT3D will capture air rather inefficiently at low speeds (the topmost case in the sketch above), which could even lead to flow separation right after the intake lip, reducing mass flow and compressor efficiency. By adding the suction-activated doors, the intake can capture more air and keep the flow attached.

Not the answer you're looking for? Browse other questions tagged jet-engine boeing or ask your own question.

33
Why do we never see high-bypass turbofan engines sharing the same nacelle on large airliners and similar aircraft?
29
What are those hatches on the engines of a B-2 that are open during takeoff?
15
Do nacelles around aircraft engines help in reducing the engine sound?
3
Why are the Boeing 747-8 engines on the wings spread apart?
9
Why do engine cowl lips appear larger and more blunt on the sides than on the top and bottom?
8
Why does the MiG 21 use anti surge shutters?
2
How does the engine produce aerodynamic lift at high angle of attack?
17
Why do the 737-100's JT8Ds, and no others, have suck-in doors?
5
How does a subsonic jet engine intake design ensure correct air intake?
6
Do ducted fans eliminate induced drag?
See more linked questions

7
How does the Pratt & Whitney F119 achieve its features?
4
Why does lower atmospheric pressure produce higher EPR (thrust)?
2
Why does the DC-8-70 have the same MTOW as the DC-8-60, despite its more powerful engines?
17
Why do the 737-100's JT8Ds, and no others, have suck-in doors?
6
Do afterburners use excessive amounts of fuel?
5
What were/are the military designations of the JT8D and PW4000?