What will happen if suddenly a window breaks during flight?

What will happen when a window of a flying aircraft breaks and is removed? Will we survive in that aircraft?

If a passenger window blows out, there'll be a bang, a whoosh for a couple seconds as the air pressure escapes (it's just a bigger version of cracking open a bottle of soda), fog will form in the cabin, and it'll get quite chilly from the sudden pressure drop. Your eardrums will feel like they also want to blow out for a second, they might hurt, and you may notice the pressure differential in your sinuses until that air escapes. You might feel abdominal bloating if you're paying attention in all the commotion.

Whoever was right at the window, if their frame is small enough to be forced through the hole, might disappear out it (mostly, if their plevis will fit through). Or if they're big enough, they might just form a plug in the window frame and help things out, (although it'll probably kill them if their head made it outside).

You don't want to be too close to the window, but otherwise you'll be fine if you get the drop down mask on in time. If the plane is in the upper flight levels, you'll have maybe 15 seconds before you pass out, after which someone else needs to put it on for you, or you could develop brain damage or even die.

Just sitting stationary, you won't "feel' the thin air just breathing it and start gasping for breath unless you're exerting yourself (a surprising discovery for me when I went on a high altitude indoctrination course with a chamber ride long ago). The crew will immediately dive the plane to get to thicker air, so you'll be at a safer altitude pretty quickly, within a minute or two.

The passenger windows are normally 1/4 inch thick acrylic plastic, and based on the tensile strength of acrylic (about 8000 psi IIRC), the strength of the window is more or less the same as the surrounding, much thinner, aluminum skin, so it takes quite a lot to make one blow out, which is why the event is so rare.

In 1990 the British Airways BAC One-Eleven captain of a flight from Birmingham (UK) to Malaga (Spain), Timothy Lancaster, got sucked out when a cockpit window blew out. The wrong bolts had been fitted by a maintenance worker. This happened after the aircraft had reached 17,300 feet 13 minutes after take-off. Another crew member, cabin attendant Nigel Ogden, shortly assisted by others, held onto him by his ankles until they landed.

They thought he was dead until they landed at Southampton. It was considered essential to hold onto him if possible in case he caused damage by hitting the left engine, wing, or horizontal stabiliser. He survived with frostbite, bruising, shock, and fractures to his right arm, left thumb, and right wrist. He returned to work after less than five months. Ogden suffered frostbite and a dislocated shoulder.

More recently, in 2018, a First Officer was partially sucked out of a Sichuan Airlines Airbus A319, at 30,000 feet, this time due to a faulty seal. He also survived.

Others have not been so lucky. 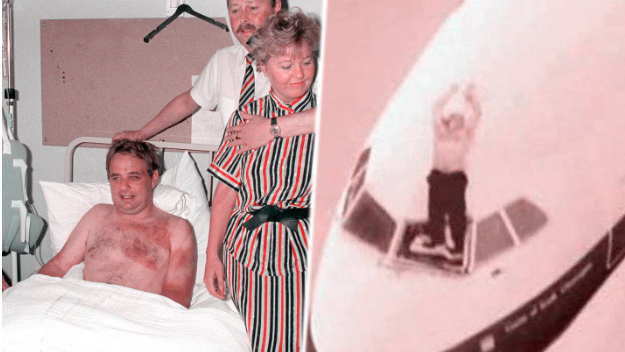 The most common window issue for commercial airliners is a cracked windshield. They happen all the time. In this case the window is "broken" in the sense that you need to replace it; often it is difficult to see through the window, too. 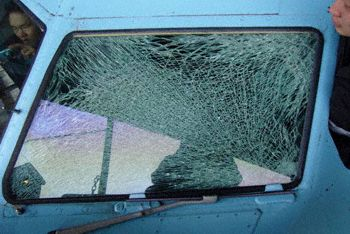 Usually, the flight lands quickly. The window is replaced. Then the plane returns to service. It's not very exciting.

A broken window is not usually "removed" because the window has multiple layers. Only under very rare circumstances does more than one layer break.

8
What pitch attitudes are common during an emergency descent for an airliner?

15
Are the window wipers on jet aircraft ever deployed in flight?
16
Can the cockpit windows on commercial airliners open during flight?
25
What are the factors behind increasing aircraft window sizes?
3
What is the explanation of the apparent staining inside this airliner window [photo]?
8
What would happen if a Cessna flew into a power line?
0
How can I use a window for an emergency exit?
2
Is this frost or frozen bacteria in clouds?
3
What is the A350's procedure for stained cockpit windows?
0
How do aircraft window size compare to each other? What are some possible improvements on them?