How strong is the A380 fuselage-wing joint?

The Airbus A380 has a maximum take-off weight of almost 600 tons. How strong does the joint between the wings and the fuselage have to be so it doesn't break? And how could it be trusted unless real-time fractures don't occur? How was it tested? I mean, you cannot accomodate such a big joint in a wind tunnel except in computer simulations.

how could it be trusted?

Like all aircraft, type certification requires that these be tested. I think the wings are tested to 1.5 x their load limit.

The A380’s structural static tests on began in November 2004, in preparation for the first flight clearance.

They place an airframe into a test rig and increase the load on the wings until the wings break. The empirical evidence is compared with the predictions made by mathematical models. 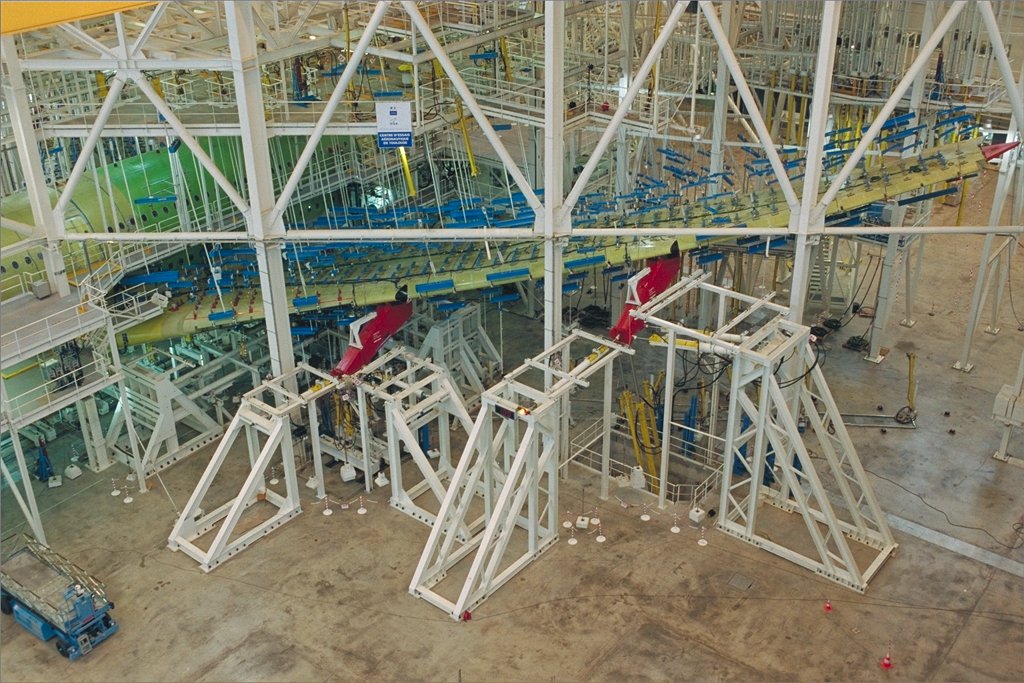 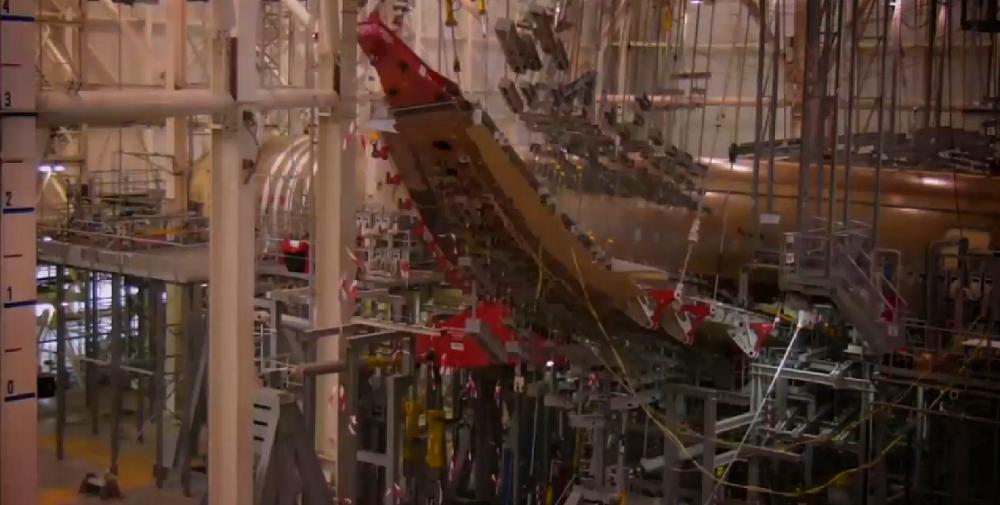 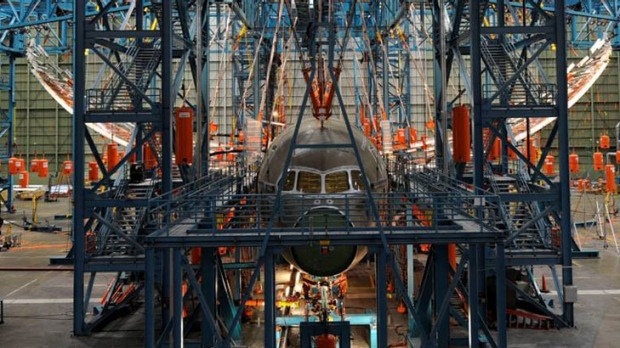 The ugly truth is: Cracks do occur, and have occurred on the A380 wing root, but that is normal. Read on for more.

The static load is only one aspect. Normally, what is driving the design is the fatigue load, which is the constant jerking of aerodynamic and inertial forces on all parts of an airplane. Today, aircraft are designed such that cracks will not become threatening between two inspection intervals.

This technique was learnt the hard way with the aircraft of the late Forties and early Fifties. Up until then, the operational life of metal aircraft was in the order of tens of hours. Parts were designed for the maximum static load plus a safety factor of 1.5 to 2.0. Fatigue was not considered.

Wooden aircraft have no fatigue problems, however, aluminum is extremely sensitive to cyclic loading. Cracks will appear after enough load cycles even at very low stress levels, and will grow with any additional load cycle. Now the approach is to define inspection intervals such that cracks which start right after the last inspection will not grow to a point which threatens structural integrity before the next inspection is scheduled. To ensure this, all major parts need to be made of two load-carrying members, one of which could fail without causing the whole part to fail.

Now we have established that each part of the fuselage-wing joint is made of two parallel members, each of which is able to carry the full limit load for which the part has to be designed. We also know that this strength can only be guaranteed for a part of the aircraft's life. In case of the A380, two things combine to make the wing root design a particular challenge. The first is scaling laws: If something grows in size, its volume and mass will grow with the cube of the size increase, but the cross section of the load-carrying structure will only grow with the square of the increase. The second factor is the high cruise Mach number of 0.85 of the A380. This had been demanded to make sure that flights with the A380 will not take more time than flights with any competing airliner, so that A380 flights are always on the first screen of the booking systems.

The high cruise Mach number demands a thin wing airfoil, and the scaling laws mean that an A380 will need relatively thicker flanges and fittings than a smaller aircraft. This can be computed with high accuracy with finite element codes like Patran in combination with NASTRAN, or ANSYS. After the computational design, one wing has to be loaded until it breaks in a test rig, and another wing will be subjected to simulated flight stresses in another test rig. Here the gust loading is important, which cannot be simulated in a wind tunnel. Therefore, the wing is loaded by an array of hydraulic jacks which are computer-controlled to simulate aerodynamic loads. When enough testing has been done, the aircraft will be certified for an initial number of flight hours which will be gradually increased as the dynamic test progresses. In case of the A380, some early aircraft showed cracks at the wing root, so local reinforcements were added.

So the ugly truth is that cracks do occur regularly, but the structural design and the operating procedures ensure that they do not cause massive failures.

The details of the strength required are likely to be complicated and proprietary. However, we can do a very rough estimate.

Using the equation for estimating root bending moment here, and the following numbers:

As to how it can be trusted: a lot of math. Organizations like EASA expect way more accuracy than my above estimate, which requires analysis of the specific loading conditions that need to be met, both static and dynamic, and the specific design of the wing, structurally and aerodynamically, which is how aerospace engineers earn the big bucks.

Of course the A380 is bigger than anything mass-produced before. But the in-depth analysis will take this into account. Airbus has some experience building large aircraft, so they have a pretty good idea of what works and what doesn't. Detailed testing is also done, on everything from the nuts and bolts up to entire airframes. All of this information is used to back up the design. Airbus isn't going to invest money in a large test without being reasonably sure it will work, and EASA isn't going to certify a design until it has been successfully tested. Modern analysis allows predicting pretty accurately where and at what load structure will fail.

But even then, with something so large and complex, things happen. Important things like the wings are required to not fail even if they are damaged, and to have redundant load paths so that even if a part fails, the remaining structure will hold. Parts are inspected to look for damage before it becomes critical. Problems are found. More analysis is done, and fixes are implemented. Usually this won't be an issue of "the wing can't handle the load", but that "the wing wears out too quickly". Fatigue is harder to predict and design for.

The FAA requirements are in 14 CFR Part 25. This includes:

Unless otherwise specified, a factor of safety of 1.5 must be applied to the prescribed limit load which are considered external loads on the structure.

So they must take the maximum load expected without permanent deformation (limit load), and allow a 1.5 safety factor on top of that without failing (ultimate load). In order to show that the structure is capable of meeting the requirements:

Compliance with the strength and deformation requirements of this subpart must be shown for each critical loading condition. Structural analysis may be used only if the structure conforms to that for which experience has shown this method to be reliable. The Administrator may require ultimate load tests in cases where limit load tests may be inadequate.

This means that all analysis has to be shown to be reliable. This must either be tested, or compared to the known performance of previous designs. The testing must also be sufficient to prove the requirements will be met.

Not the answer you're looking for? Browse other questions tagged aircraft-design flight-testing airbus-a380 fuselage or ask your own question.

6
If a commercial airliner enters into a spin at high altitude, is it possible to recover?
7
What happens if the gust alleviation system on an A380 fails?
6
Does the 787 gust alleviation system make a more comfortable ride or for a more stable aircraft?
3
Can the cracks found on the A380 wings tear the wing apart?
3
How can we operate wing bending tests?
1
What is the maximum momentary G force that a modern airliner's wing can take before it snaps in extreme turbulence?
1
Do aircraft designers gather real data to confirm their design (CFD, wind tunnel) data?
0
How does scaling of UAV size impact range?

0
How to calculate the fuselage geometrical parameters?
17
Why was the A380 built with a gull-wing design?
8
What are these markings on the A380 wing?
10
How is a wing joined to the fuselage?
4
How is an Airbus A380 fuselage joined and fastened together?
23
Why is the A380's fuselage designed with a flat bottom?
21
What is the shiny stripe around the aft wing–body fairing on an A380?