Can rotorcraft pick up a dangerous electric charge?

So, I was re-watching The Hunt For Red October, (in light of current Russian shenanigans with Sweden), and there was a scene in which a crew-member on the ground was electrocuted by making contact (and presumably grounding) the helicopter, which had picked up a charge in the stormy weather. Can anyone explain more of what is going on here?

In the same way than an aircraft will build static charge on the wings from friction with the air, the same thing can happen with helicopters from fast moving blades.

Any aircraft flying in the atmosphere can be considered as a conductive body located in a highly electrically insulated environment. In such a body, electrostatic charge is generated by three principal mechanisms:

Here's a more detailed photo of the US army discharging a helicopter while wearing insulating gloves: 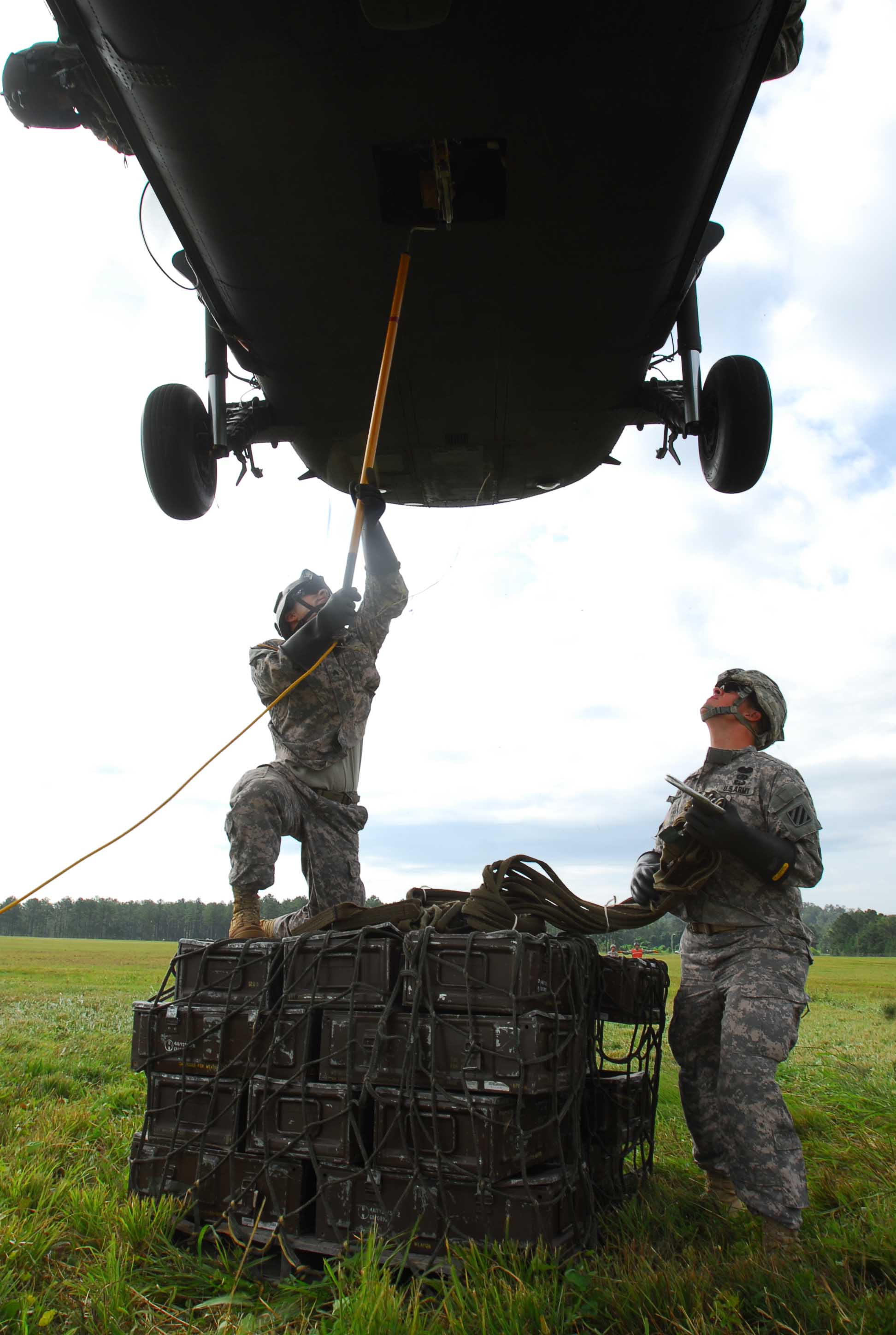 SGT Nathan Rodeheaven uses a static probe to discharge static electricity from a UH-60 Black Hawk before his teammate, PV2 Danny Browning, hooks up the cargo to the helicopter. The safety measure prevents the hook-up man from being electrocuted in the event there is accumulated static electricity. Photo: Kristin Molinaro

I am a Naval Aviator and as part of my water survival training, I was deposited by boat off the coast of Florida and picked up by helicopter. It was a huge point of emphasis that we let the helicopter's rescue hook touch the water to discharge any built up static before we touched it.

No one in my class grabbed it before it hit the water, so I can't speak to how bad the shock would have been.

I work for a Christmas tree farm and we harvest our trees out of the field using a helicopter. I am the hook man and attach the bundle of trees to the heli, then he takes them to another location. In that breif trip during a rain storm, or even a foggy day static charge will build resulting in a very unpleasant shock. Sometimes bad enough it will contract the muscles in my hand and arm. I’ve been doing this for 3 years and finally invested in some 20,000Vac insulated gloves that are enough to keep this from happening.

Helicopters in normal weather will build up a static charge, just ask any ground crew for a logging helicopter. Normally the hook will be grounded by dropping it on the ground before the hooker will touch it.

Or a grounding rod will be used to neutralize the static charge.

I was struck in the forehead in 1983 from the discharge off a CH-53. I was wearing a kelvar helmet which was split down the middle from the strike, heart rate slowed down to 4 beats a minute thought I was a gone. I was stationed at camp Pendleton USMC when it happened.

Yes they do. I was involved in many HDSs (Helicopter Delivery Service) and would earth the Helo with a sheperds crook and trailing copper linkage - often getting a visible spark. I also took part in the rescue of a few dozen (memory fades on how many) crew from a bombed ship with no hook and earthed the helo myself - yes it hurt.

We didn’t have a static hook in my day. I will tell you, sometimes the pilots would relieve the static charge by grounding the aircraft themselves. Sometimes, they did not. The static charge would vary From moderate to severe. And, it could even be felt by your partner who was bracing you by the legs. After the first couple of volunteer troopers started flinching from the shock and throwing the hook, me and my buddy got elected/volunteered to do it. We airmobiled the entire battery-sized unit, alternating back-and-forth as hook up man. By the time it was done, we were completely spent LOL. 82nd ABN 2/321 ,B /3-319 1986-89.

It sounds like the helicopter had no static dissipators/wicks fitted (or broken ones!), and this resulted in the normal in-flight charge buildup zapping the groundman on the submarine instead.

I'm surprised the helicopter pilots didn't notice that awful noise in their radios well before this became a problem, though!

See What are these things hanging off the trailing edge of the wing? for more details.

Not the answer you're looking for? Browse other questions tagged safety helicopter electrical-system static-electricity or ask your own question.

0
How significant is the static buildup on the blades of the main rotor? And some questions related to this
59
What are these things hanging off the trailing edge of the wing?
10
Do helicopters use static wicks?

30
Why do airplanes use AC electric power?
4
What are the hurdles to overcome before purely electric commercial aircraft can fly?
9
How dangerous is airborne debris?
4
How do electric anti-icing systems work?
30
Why are on-board computers allowed to change controls without notifying the pilots?
2
How are performance classes for helicopters/rotorcraft defined?
0
What are the applications, advantages and limitations of Gyrodyne rotorcraft?
10
Isn't it dangerous for a soldier to sit on the outside of a flying helicopter?
1
Sub-ideal Autorotation in Rotorcraft