By what measure was Gander International Airport the "largest" in the 1940s?

had four runways and was the largest airport in the world

Now, "large" can mean a lot of things, as in

but I'm not familiar enough with airport history to know which ones I would have to compare it to. LaGuardia for example was opened on Dec 2, 1939 and also had four runways.

So, my question is, by what measure was Gander the largest airport at the time (of course, assuming, that it actually was, by any reasonable measure)? 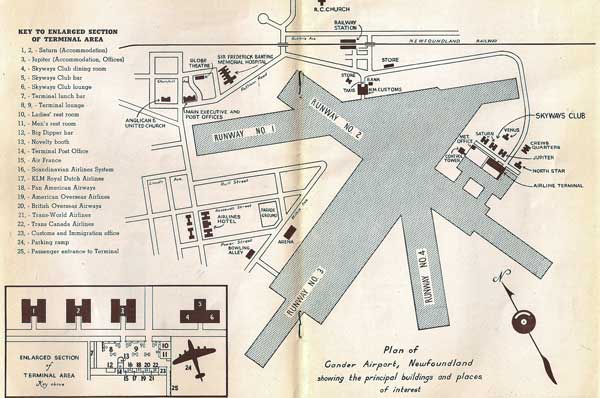 In 1938 when it opened, Gander Airport was at least 250 acres in size of graded land and it had 35 acres of paved surfaces. It's four runways used 1,230,000 square yards of concrete to complete. It was at the time the largest paved runways in the world.

Other than the 250 acres of level surface, I could find no information on the hundreds of buildings located at the airport. At one time this included a USAAF air station, which was built after the physical airport was completed, with over 100 buildings for barracks, hospitals, hangars, warehouses and somewhere in the mix a fuel depot. There was an RCAF station located at the airport as well, which had a similar number of buildings. In addition, the Royal Canadian Navy had a communications outpost that was active through the Cold War. On top of that were 1700 civilians working at the airport. It needed the infrastructure to support hundreds of flights every day to get planes to the British Isles at the height of the war.

I think the size was considerably larger than 250 acres, but there's no data at all on the physical size of the airport. After the war, the churches, schools and libraries on base were donated to the town. It has about 175 acres available for lease if you are interested.

99% Invisible contextualizes the importance of Gander:

By 1938, the Gander airport was fully operational but mostly unused. There just weren’t enough planes in operation that could actually survive the crossing of the Atlantic Ocean. In the two decades before World War II, only 100 planes had crossed the Atlantic — 50 others had tried and failed and 40 people had died in various attempts.

So, following the ferrying flights in WW2, prop planes stopped at Gander. That era came to an end with the jet era- the jet powered DC8 and Boeing 707 both arrived in 1959, the same year a huge renovated terminal was completed at Gander, resulting in a visit from the queen. Anyhow, that means some numbers are available.

That isn't the most by volume, though. For instance, London Heathrow was serving a million passengers per year by 1953, New York's Idlewild/JFK was handling "nearly 3 million" by 1954.

Perhaps it was simply disproportionately large or important.

(H/T @niels for starting down this path)

Probably it was, just on the basis of the sheer number of planes arriving & departing per day. At that time, Gander was as close as you could get to destinations in Europe until they got planes capable of taking the polar route.