How do test pilots verify TAS?

This question is about what methods/technology test pilots have at their disposal to verify airspeed indicator calibration during flight-phase testing.

A paper published in 2001 by David Rogers outlines his "Horseshoe Heading Technique" which involves flying the aircraft in a U shape and recording GPS-derived groundspeeds so that you can then adjust for implied winds aloft to calculate the average TAS of the aircraft over the maneuver.

Now that we have significantly more advanced computer equipment in regular use, including AI, Extended Kalman Filters, etc, are there more advanced ways of doing this that would use probabilistic methods to account for things such as pilot inaccuracy, wind variation during the flight, etc, or that would allow for TAS to be calculated after performing arbitrary maneuvers?

The "Brauniger IQ Comp" variometer which is at least two or three decades old now is a rate-of-climb instrument for hang gliders. It is capable of producing a wind direction and wind speed estimate any time the glider is engaged in circling flight, simply based on the ground track generated by a handheld-style GPS that interfaces with it. (Obviously, there is an assumption that at least over the short run, the pilot is not making erratic changes in bank angle, so at least over the short run the glider is assumed to be describing round circles with respect to the airmass.) If you know wind speed and direction, and you know ground speed and direction, then it is trivial to calculate TAS (especially when the glider happens to be going directly upwind or downwind.) The much higher-tech computerized variometers of more recent design for sailplane usage undoubtedly have similar capabilities and more. Therefore in any aircraft that spends a lot of time circling, or in any aircraft where the pilot is willing to fly a few sample circles without erratic changes in bank angle, it would seem trivial to use such instruments to come up with a wind calculation that is independent of any data from any airspeed probe. This in turn, when compared with the ground track data, leads directly to a True Airspeed calculation that is independent of any data from any airspeed probe. And when air temperature and pressure are taken into account, this leads directly to a calculation of what the Indicated Airspeed ought to be.

Just as any modern soaring flight analysis software used to display and analyze actual flight tracks based on GPS position data alone can come up with an estimate of wind direction and speed and present a table of how this is varying both over altitude and over time. The same software can easily present a graph of groundspeed and direction of ground track. If the actual data from the airspeed indicator is also saved, a post-flight analysis of possible airspeed calibration errors should be entirely possible.

So no, this sort of thing is not something that can only exist in the world of Boeing airliners, corporate jets, etc.

As for a list of precisely which instruments or programs are best suited for, and often used for, actual real-time (or post-flight) calculation of errors in Indicated Airspeed -- that will be left to another answeree to complete the story.

(I guess I'm interpreting the question as one about what is the most state-of-the-art equipment that would be practically available to pilots of home-built aircraft, sailplanes, etc, and would avoid the need to fly horshoe patterns, etc. A constant-banked circle, sustained over many revolutions, seems simpler and more redundant than a horseshoe pattern. If it is truly desired for the system to work as the pilot is maneuvering arbitrarily, then it would appear that incorporating accurate aircraft heading data (not just direction-of-ground-track data) would be critical. But that too is easily available with today's technology--technology that is realistically available far beyond the realm of airliners, corporate jets, etc.)

On the newest experimental development programs they use what are called "Smart Booms", or Smart Air Data Test Probes, for the test a/c, which is a flight data probe or boom that doesn't have the traditional angle vanes etc, but just has a series of holes that allow dynamic pressure to be measured around the nose of the boom.

All of the parameters measured by the boom, dynamic/static pressures, angles of slip and attack etc, are derived by software. Below is the Smart Boom (the orange bit) used on the developmental C Series (Airbus A220) that replaced the traditional long boom with vanes etc. 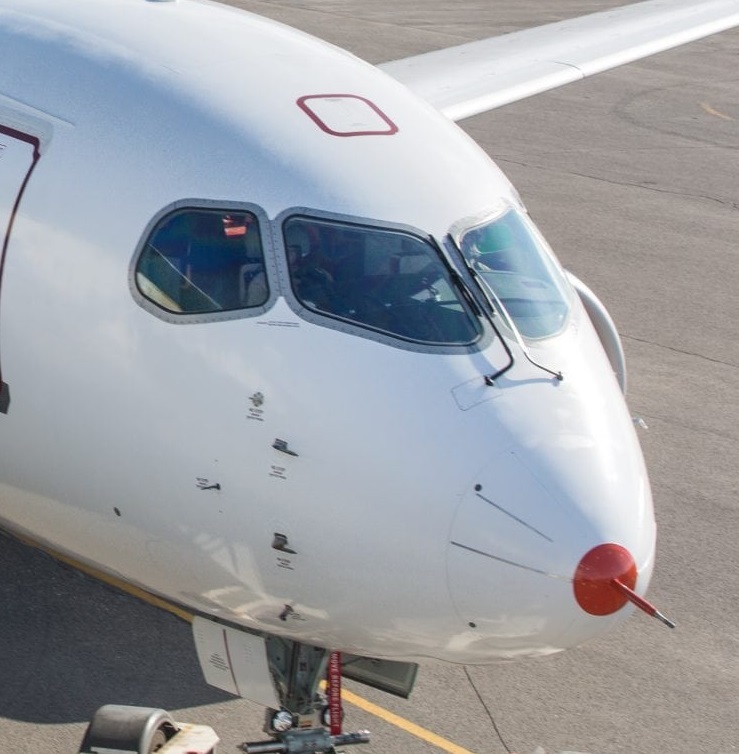 This is a Smart Probe developed for UAVs that produces very precise software-derived air data and may be what you have in mind.

24
Do test pilots on commercial aircraft wear a parachute?
11
Why aren't test planes remote controlled?
19
How do test pilots determine an aircraft's capabilities?
4
How is TAS affected by wind?
7
Were there any test flying incidents during which the pilots managed to escape the plane?
5
Why do pilots normally fly by CAS rather than TAS?
15
Are test pilots certified to fly all aircraft types?
1
Were there civilian female test pilots in the 60's?