What is an "Alternate Airway"?

In What is the number in a closed box right below a victor airway? I noticed: 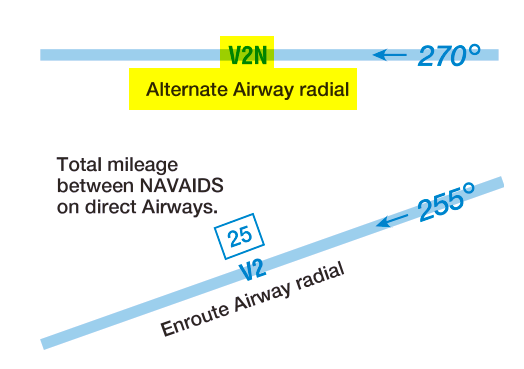 What is an "Alternate Airway"?

Is it a leftover from something that used to exist? What is it?

(My gut feeling tells me it's something so obvious but I'm really not seeing it.)

I found an old definition in the All-Weather Flight Manual published by the US Navy in 1957:

The current AIP Appendix: ATS Routes does not list any alternate airways as far as I could find, so I guess they are not used anymore. They are however still mentioned in FAA Order JO 7110.65:

b. VOR/VORTAC/TACAN alternate airways. State the word “Victor” followed by the number of the airway in group form and the alternate direction.

Thanks to @757toga's comment, I was able to find more:

Circa mid-80s the FAA agreed with ICAO to "revoke all Alternate Airways" (Federal Register Vol. 51, 1986), and for example in 1986 was in the process of renaming such an airway in Hawaii.

And before that, from a related study of the NAS (National Airspace System):

The present alternate airway structure is still based largely on nonradar separation standards. With the increased use of radar, a study is needed to evaluate the possibility of eliminating unnecessary alternate airways and reidentify remaining routes taking into consideration ICAO standards. This would also contribute to a reduction in chart clutter.

To add to the information from the other answers to this question:

Years ago, prior to the extensive availability of ATC radar, it was not uncommon to use Alternate Airways for IFR enroute lateral separation between aircraft .

In order to achieve and maintain separation between aircraft in a non-radar environment ATC procedures could be complex and inefficient (compared to the use of radar separation). One procedure that reduced the complexity was the use of Alternate Airways. These airways were located in areas where, based on the traffic flow, were beneficial for both ATC and pilots.

The image below is just one example of the use of Alternate Airways, which likely no longer exist anywhere in the U.S. due to the availability of radar throughout most of the enroute structure.

Lastly, the foundational design of the IFR ATC system was (and is) based on Non-Radar routings and loss of communication between ATC and pilots (with some exceptions). The elimination of Alternate Airways is a product of the now expansive availability of ATC radar coverage resulting in the reduced need for using Non-Radar separation (longitudinal and Lateral) procedures. (Vertical separation is Non-Radar separation even when used in a radar environment) 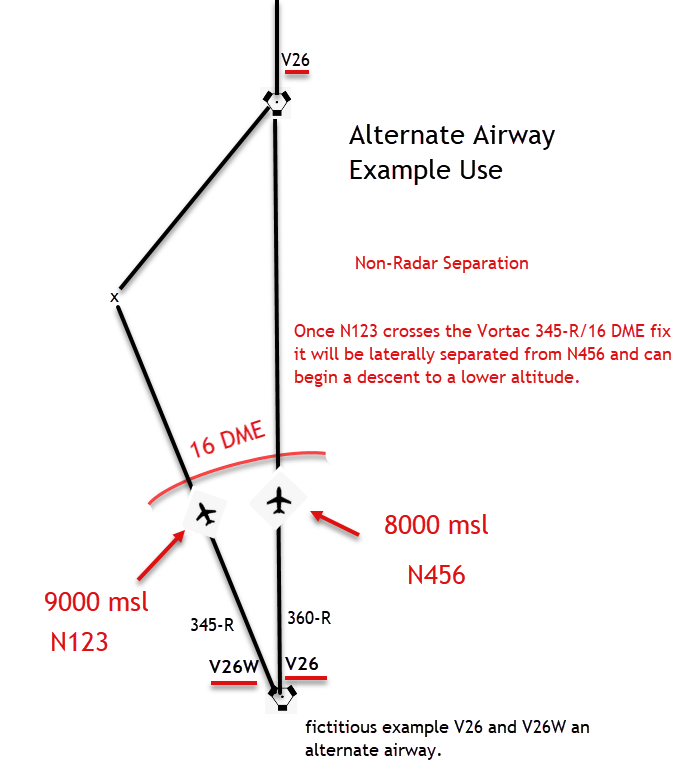 Share
Improve this answer
edited yesterday
answered May 14 at 23:58

4
What is the number in a closed box right below a victor airway?

7
Why isn't the course fixed along an airway?
15
Why publish an unusable airway?
2
What is the difference between en route and airway?
6
What is the width of a high altitude airway?
7
Are there conventions on which side to travel on Victor airways - USA?
6
What are those flight level values on an airway?
4
What is the number in a closed box right below a victor airway?