I've looked everywhere and I'm not able to find the relevant information regarding the following.

What equipment can be inoperative and still allow me to fly a pa-28-181? I know the rules in the 91.213 and to placard the inoperative equipment, etc.

But my question is, which specific equipment is required for flying day/night VFR (PPL)? There is no MEL for most GA aircrafts, such as the pa-28-181s.

For example, if the landing light isn't working, I can probably still fly day VFR but I can't fly if the altimeter isn't working.

I was told that there is a flow checklist that helps answer whether a specific inoperative equipment is required or not for the cherokees but I can't find it. Any guidance would be helpful.

P.S.: I'm preparing for my checkride and am trying to checkoff the PA.I.B.K3a item on the ACS.

Your question: What equipment can be inoperative and still allow me to fly a pa-28-181?

AC 91-67 - Minimum Equipment Requirements for General Aviation Operations Under FAR Part 91 has been cancelled and has not been replaced (as far as I can tell).

However, you can refer to AC 91-67 - Minimum Equipment Requirements for General Aviation Operations Under FAR Part 91 Document Information, which shows this AC and the reason for its cancellation.

Also, helpful is this FAA S Team training course entitled: ALC-25: Flight Review Prep Guide, which contains excellent information regarding aircraft airworthiness and should help in an understanding of what is necessary to respond to PA.I.B.K3a in the Private Pilot ACS.

Relevant excerpt from the (U.S) Private Pilot ACS referred to in the question: 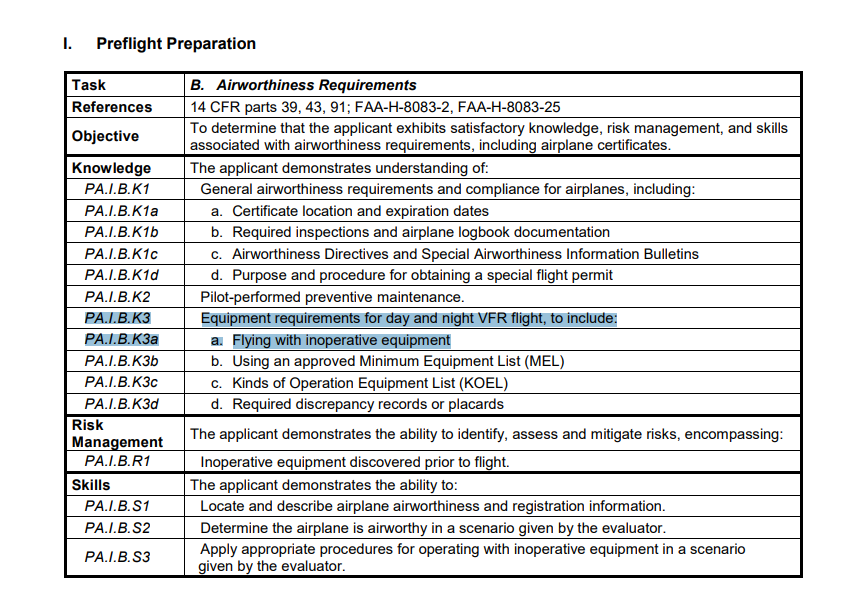 Since you mentioned 91.213, I'm going to assume you're talking about the US, since you didn't specify the jurisdiction.

The required equipment for VFR is outlined in 14 CFR § 91.205 The exact answer depends on the type of flight.

For VFR day flight, you will need:

Tachometer for each engine.

Temperature gauge for each liquid-cooled engine.

Fuel gauge for each tank.

Landing gear position indicator, if the aircraft has a retractable landing gear.

An anticollision light system (if the plane was certificated after March 11, 1996).

If operated for hire over water and beyond power-off gliding distance from shore, approved flotation gear.

For night VFR flight, you need all of the above, plus:

An anticollision light system (if certified after August 11, 1971).

An adequate source of electrical energy.

One spare set of fuses, or three spare fuses of each kind required.

In determining which equipment can be inoperative in flight the following information should be looked at:

The PA-28 airplane most likely doesn't have a MEL. It does have an equipment list as located in Section 6 of the POH. 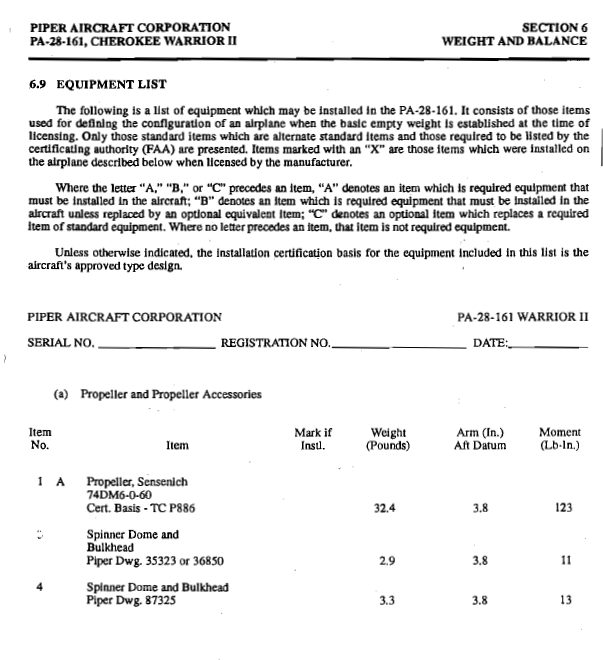 Not the answer you're looking for? Browse other questions tagged safety ppl equipment piper-pa-28 or ask your own question.

14
Backup plane for checkride: Can it be a different model?
24
What if pilot feels too tired before his flight?
2
Does the Piper PA-28 Cherokee have a limitation on its maximum lifetime flight hours?
17
Why does the Piper Cherokee (PA-28-140) engine have such low horsepower despite the very large displacement?
6
Where is the fuel vent on a Piper Archer TX?
2
What does the last digit mean in a Piper Arrow model number?