Why do fighter aircraft not use anti-shock bodies for fuel storage?

My question bears specific reference to the anti shock bodies (also known as Küchemann carrots) used on the wings of the Convair 990 jetliner. Whilst they increased the maximum speed of the aeroplane slightly, this is nowadays achieved with supercritical wings. However, on the CV990, they could be used for additional fuel storage without the penalty of speed reduction.

So my question is why do modern military aircraft not use anti-shock bodies instead of conformal tanks (e.g. F15 and F16)?

Who says they didn't? You need to look further into history, though.

The first application of tanks shaped as Küchemann bodies were "Doppelreiter" fuel tanks (slipper fuel tanks) which were used on some German fighter airplanes in WW II. They were mounted above and behind the wing, and to everyone's surprise they had little impact on the top speed of the airplanes, and in case of the Me-309 helped to increase it slightly. At that time, transsonic flow was little understood and the tanks' negligible impact on drag was an unexpected benefit. 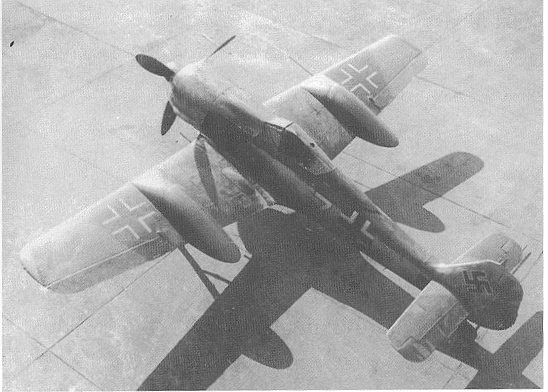 More modern, supersonic fighter airplanes use a coke-bottle like constriction in their fuselage for shaping the overall cross area distribution, a technique which cannot be used by airliners with their cylindrical fuselages. Küchemann bodies, therefore, are a makeshift measure and only used when coke-botteling cannot be applied. Conformal tanks use the shortest possible fuel lines and add only very little friction drag, so they are a superior solution to Küchemann bodies when it comes to adding fuel volume.

Not the answer you're looking for? Browse other questions tagged range or ask your own question.