Has there ever been a VTOL aircraft thruster that generated lift through the use of a drag force?

I have been recently thinking about a conceptual VTOL aircraft thruster that should generate lift through the use of a drag force and I am very curious to know if such a thruster has ever been built and tested on a VTOL aircraft.

To help illustrate and explain how this VTOL thruster would work, I have created a couple of CAD drawings and have posted them below.

(Note: I want to point out that four screws are being used to secure the airfoil to the vertical pipe, and that the airfoil is colored orange to help it stand out from the rest of the thruster.) 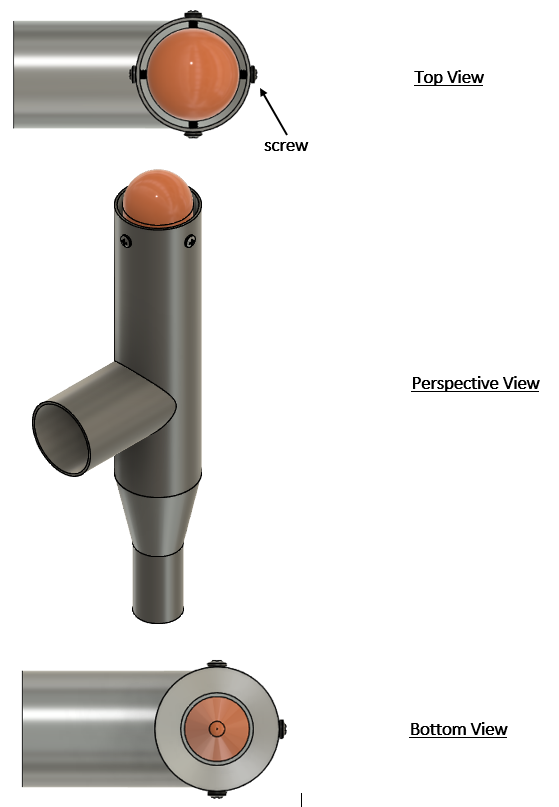 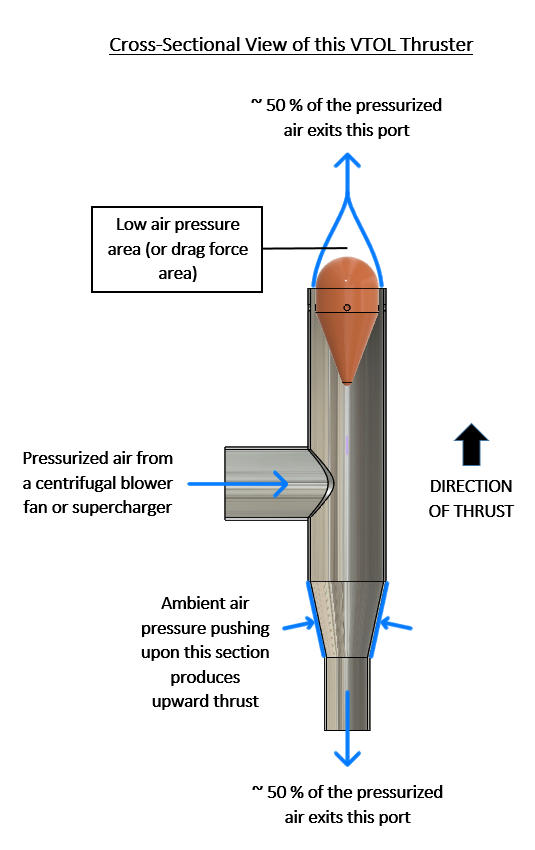 I have spent many hours searching VTOL/drone manufacturers' websites and aviation historical websites on the Internet for a VTOL thruster design similar to this one but have not found one yet.

Has there ever been a VTOL aircraft thruster that generated lift through the use of a drag force?

Based on user FreeMan's comment below in which he suggested that a better design would be to have two very smooth curves directing a pre-divided air flow up and down, I redesigned this VTOL thruster to incorporate this design improvement. 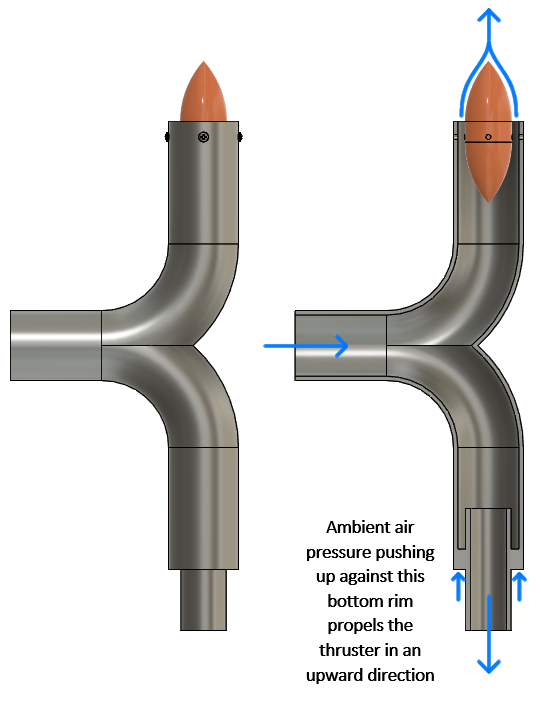 aircraft-design aerodynamics aviation-history aircraft-physics drag
Share
Improve this question
edited May 13 at 21:35
user57467
asked May 4 at 15:09

No, there haven't been any VTOL aircraft that used a device like that. There's a very good reason for this: this device will produce very little, if any, lift.

If exactly 50% of the air exits out of each nozzle, and the two streams are at the same velocity, then there will not be any lift at all. But that's not what will happen. The upper path is more restricted than the lower, so the amount of air going up will be less than that going down*. This will generate a slight upward thrust.

You can increase the upward thrust by further restricting the top nozzle. This will force more air downward, thus creating more upward thrust. The most efficient form of this device is one in which the top nozzle is 100% restricted, at which point you just have a simple downward-pointing nozzle.

* Yes, the air exiting the upper nozzle will be at a higher pressure, which will increase the downward thrust somewhat, but not enough to compensate for the reduced mass flow rate.

Momentum is conserved, which means if something goes up, something else has to go down. That's just the way it is, unless you've invented new laws of physics, which I don't think you're claiming to have done.

If your machine goes up, then air is coming down somewhere. You say equal parts of the machine's exhaust go up and down, so that isn't what's doing it. In fact the air that goes up goes through a smaller restriction, so it should be moving faster and carrying more momentum than the air going down. You could fix that by making the ratio not 1:1.

So your exhaust air isn't intended to carry any net momentum. Then it must be coming from the ambient air. Does your machine make ambient air go downwards? I think it does not.

Another way to analyze this machine is: what happened to the downward pressure that the upper ambient air would have pushed on the top of the machine with, if the top of the machine was a closed cap? Well, now it is pressing on the top exhaust air, slowing it down. If you want the top and bottom air streams to have the same final speed, the top air stream has to come out faster from the machine (pushing the machine down). If they come out at the same speed from the machine, the top one is slowed down by the ambient air pressing on it, and you might generate lift, but it comes from the top air stream being slower than the bottom one, a well-established principle. If you accept that principle, you might as well send no air out the top, and send all of the air out the bottom, and then you have a plain old engine.

Not the answer you're looking for? Browse other questions tagged aircraft-design aerodynamics aviation-history aircraft-physics drag or ask your own question.

2
Is it possible to estimate airspeed on top and bottom sides of a wing at zero angle of attack?
6
What is the effect of flow separation on lift, pressure distribution and drag?
3
Is flow turning different from the Magnus Effect? If so, how?
15
Is lift in fact a kind of drag?
0
Pressure Distribution Pattern around Wing
1
Would a propeller extracting air from a cylinder with holes in it be an ideal lift apparatus for a VTOL aircraft?
2
Blunt noses subsonic drag - why a complete ellipse?
2
Explained intuitively, why does aspect ratio affect induced drag?