How does the weight affect the altitude that can be reached by trading speed after a total engine failure?

I recently read in the manual for The Beechcraft T-6 Texan II (a turboprop aircraft) about engine failure during flight at different altitudes and the gains from pitching up after the engine failure occurs to trade airspeed for altitude.

They show graphs that depict the altitude gain from pitching 20° nose up attitude bleeding airspeed from 200 KIAS to 145 KIAS at different Pressure Altitudes. The not so intuitive part is that shows how the heavier the aircraft gets (by having more fuel) the more altitude gain by pitching the same amount of nose up (20°) until airspeed bleeds off from 200 to 145 KIAS in case of engine failure. could someone please explain how could this be possible? I doubt there is a mistake in their manuals. There are a couple of these graphs from 250 to 145 and 200 to 145 at different Pressure altitudes.

At a first glance, it may seem intuitive to think that, if the heavier aircraft encounters an engine failure and it pitches up (same amount nose up attitude as the lighter aircraft) it will produce the same amount of lift as the lighter one (at the same pressure altitude and same airspeed) but with more weight the less lift to bring the aircraft to a higher altitude compared to a lighter aircraft. I guess that is not right?

If there is a vector analysis/equations or any math proving this I would appreciate it a lot.

In other words: two identical turboprop aircraft, except A weighs less than B, fly at same KIAS, engine fails, both pitch up 20° nose up, which one gains more Alt?

The graph of weight vs altitude gain: 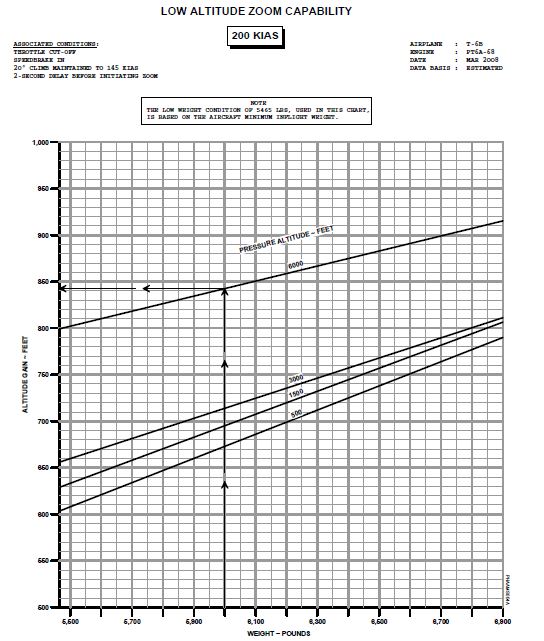 aerodynamics aircraft-performance engine-failure turboprop poh
Share
Improve this question
edited May 1 at 21:57
user14897
asked May 1 at 4:56

To gain altitude (by any means) you need to gain potential energy. Since the engine has stopped, the only thing you can do is trade kinetic energy for potential energy (slow down).

Since both kinetic energy ($E_k = \frac12 m v^2$) and potential energy ($E_p = m h g$) are proportional to mass, for a spherical cow trading the same speed would result in the same gain of altitude independent of its mass.

But an airplane isn't a spherical cow. There is one more force we need to account for: the drag. Drag has two components:

Since all the variables except parasitic drag are proportional to weight, the parasitic drag will take relatively less energy for a heavier aircraft (more energy to begin with), indeed allowing the heavier one to climb higher.

For a similar case that might be a bit more intuitive: consider having two balls of similar size, but significantly different weight. A ping-pong ball and a golf ball may be a good example, because they are light enough that accelerating your hand becomes the limiting factor, so you can throw the lighter ping-pong ball as fast as the golf one, but not much faster. But the golf one will then fly far, while the ping-pong one will slow down and drop much closer. This is because the air drag is relatively much bigger for the lighter ball.

A few issues with the concept unless hard test flight data is shown.

Glider data shows us that two gliders of different weight will glide the same distance. The heavier one must glide faster but has more potential energy. The two perfectly cancel each other out.

So Vbg for the fuel laden craft will be higher, therefor it must break off its ascent sooner.

Obviously, the heavier craft must either pitch harder or fly a larger radius to reach 20 degrees nose up

Once at 20 degrees nose up, both parasite and induced drag will be greater because the entire plane has a higher AoA.

Procedurally, yes, pitch up for Vbg, but be aware of what it is for your weight. 145 knots may be too slow for a plane with a large fuel load.

Not the answer you're looking for? Browse other questions tagged aerodynamics aircraft-performance engine-failure turboprop poh or ask your own question.

13
How does an engine failure affect the flight of an airplane?
15
How fast does cabin air pressure leak after a total engine failure?
4
Turboprop vs turbofan (in regional aircraft)
17
Does a windmilling propeller create more drag than a stopped propeller in an engine out scenario?
1
Why isn't Vy lower than the speeds for best L/D ratio and best glide ratio in an airplane with a piston engine and a variable-speed prop?
2
How does altitude affect the TAS and thrust of an electric fan powered aircraft?
1
Which "Power Available" graph is more correct?
3
How does gross weight affect helicopter autorotation?
8
Why does the optimum cruise altitude depend on the weight of the airplane?