edit: question was too long, and is actually simple, so I removed unneccesary description

There are many questions here about:

(Calculating thrust and required prop size for given engine power)

But I would like to find more examples of measured static thrust made by a propeller.

So, if possible, please post some figures or some link with any data on measured static thrust on an aircraft with a piston engine.

(example in photo below) 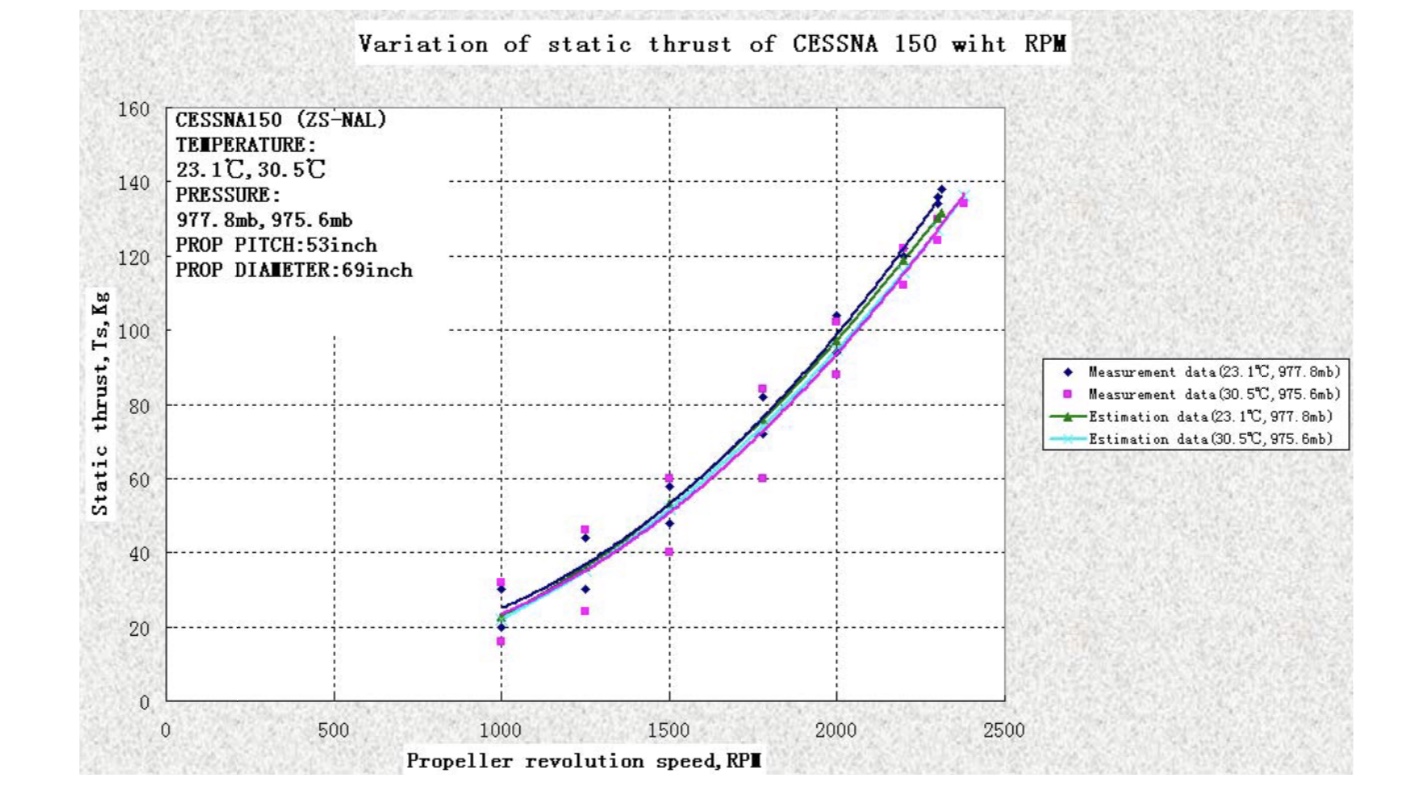 Let's first clear up some nomenclature about "power".

Power into the system, or throttle, or rate of fuel consumption is one meaning. Power as Force × Velocity is another, also known as mV$^2$/s. These can be linked as potential energy/second fuel burn = Thrust × Velocity = Drag × Velocity (at steady state or constant Velocity.

So, you can work this problem theoretically through calculation of form and induced drag for a given airframe in a range of speeds. But, it is still difficult to calculate oweing to effects of "prop blast", which can affect both lift and form drag.

There is a wealth of data out there for various airframe/engine/prop combinations, which through years of testing have shown what is optimal, but it is really like trying to hit a moving target to develop a "Rosetta Stone" formula because of drag, weight, and desired speed range at what altitude all factor in.

But static test data would not be where I would start, as the relationship of prop pitch, RPMs, and airspeed is crucial. All your Cessna 150 data is showing is that the prop AoA on the bench seems to be more efficient as RPMs increase.

More meaningful data might be airspeed vs RPMs in flight. Thrust could be estimated from drag calculations, but in reality how the plane performs at a given throttle setting is what counts.

An approximation of drag at various airspeeds could be achieved by plotting angle of descent in a power-off glide.

Discounting effects of changes in the airstream from turning props, this yields thrust requirement for level flight, which could then be compared to RPMs required for level flight at that airspeed.

So, attaching two props with bicycle chains and sprockets to a Belphagor turbine might improve thrust efficiency. I believe Kuznetsov knows this.

Not the answer you're looking for? Browse other questions tagged propeller piston-engine thrust or ask your own question.

5
Is this a good or a bad propeller?
4
Why does this calculation show Gustave Whitehead's propellers were more than 100% efficient?
3
How to realistically model propeller static thrust?
2
Can someone please tell me all the units for the propeller thrust equations?
2
Does it ever happen that increasing the prop RPM without moving the throttle actually decreases the thrust and power delivered to the airframe?
0
What is engine power vs propeller thrust relation?
1
How do power and thrust curves compare?
0
Electric ducted fan with thrust tube thrust and exit velocity calculation