Why does the surface-level Class E airspace at SIT/PASI (Sitka Alaska) extend so far to the northwest?

The August 1992 Final Rule "Terminal Airspace Reconfiguration" (page 38963, Federal Register Volume 57 No 167, August 27 1992) (link to pdf of entire issue opening to this page) stated that the purpose of "control zones" was as follows:

The same Final Rule also makes clear (pp. 38963-38964) that surface level controlled airspace, including surface-level Class E airspace, would serve the same purpose after September 16 1993 as control zones served prior to that time. 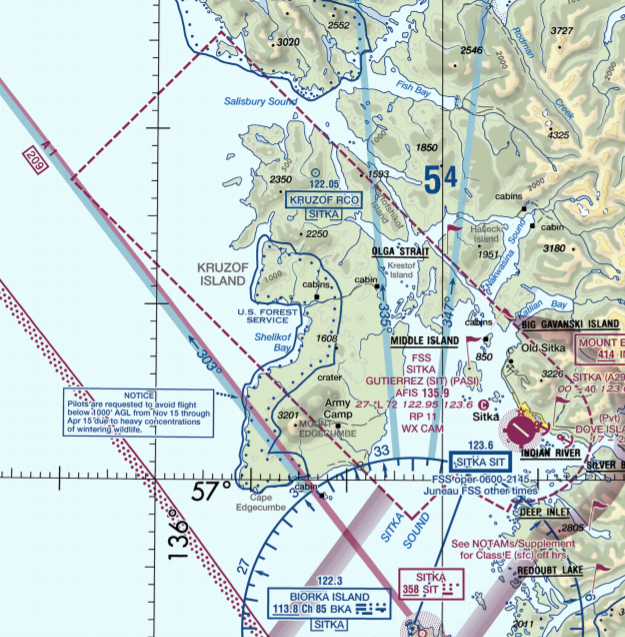 With this in mind, why was it necessary to designate such a large area of surface-level Class E airspace at SIT/PASI airport at Sitka, Alaska? (Pictured above.) The E4 surface-level Class E "extension" is 12 miles wide, and extends to 28.3 miles northwest of the airport. (See page E-158 of the "Airspace Designations and Reporting document FAA Order 7400.11F; this airspace was last modified 11-05-2020.)

Is it really true that there are instrument procedures for this airport that could put an aircraft below 1000' AGL in all or most of this airspace? If so, which procedures are those?

Or does the FAA now designate surface-level controlled airspace based on some criteria other than the one stated above?

Has the E4 surface-level Class E "extension" in this area simply been sized to to completely contain some particular instrument procedure, regardless of whether or not an aircraft following that procedure might be within 1000' of the terrain (or ocean) in all parts of that "extension"?

Wouldn't much of the airspace covered by the E4 surface-level Class E "extension" extending 28.3 miles northwest of the airport be adequately be protected by a "transition area" with a Class E floor at 700' AGL, or by the existing surrounding Class E airspace floor at 1200' AGL?

The LDA/DME RWY 11 approach puts you darned close to 1000 AGL over those mountains if you come in from HEXAB on the localizer - and that assumes you fly it perfectly. The course reversal for that approach is basically smack on top of that 2250 peak.

The airfield itself is basically at sea level (26' MSL), and is on the ocean, so I'd expect there's also some gnarly local air currents fairly regularly, especially for approaches that try to come in between the islands. That's all pretty rugged terrain over there, and it's got a reputation for having a lot of microclimates.

As another answer has noted, the surface-level Class E "extension" to the northwest of SIT/PASI is indeed intended to protect the LDA/DME RWY 11 approach.

In the July 20 2021 edition of the "Airspace Designations and Reporting Points" document, FAA Order 7400.11E, the E4 surface-level Class E "extension" does not exist yet (it would be on page E-160 if it did), and the E2 surface-level Class E airspace only extends 11.1 miles northwest of the airport, extending 3 miles to either side of the 313° radial.

Presumably the LDA/DME RWY 11 approach did not yet exist yet at this time, at least in its present form.

The large E4 surface-level Class E "extension" spanning from 4 miles north and 8 miles south of the 315° bearing from the airport, extending to 28.3 miles northwest of the airport, was introduced in a Notice of Proposed Rule-Making published May 7 2020, and a Final Rule published July 31 2020, effective November 5 2020. These rule-making documents do not state what new approach procedure(s), if any, required the protection of this airspace all the way down to the surface.

The NPRM does contain the following text (italics and bolding added):

This action also proposes to establish a Class E airspace area, designated as an extension to a Class D or Class E surface area, at the airport. The area would be northwest of the airport and is designed to contain IFR aircraft descending below 1,000 feet above the surface.

The subsequent revocation of this large surface-level Class E "extension" has been proposed in a NPRM published February 7, 2022. This NPRM contains the following text (italics and bolding added):

The Class E surface airspace area northwest of the airport requires modification to properly contain IFR aircraft descending below 1,000 feet above the surface of the earth. The LDA/DME RWY 11 approach procedure turn area currently extends 28.3 miles to the northwest, but the area should be reduced due to the proposed elimination of the LDA/DME RWY 11 approach procedure turn.

May 7 2020 NPRM proposing the large E4 "extension" to the northwest of SIT/PASI: Link to text of docket, link to PDF of entire Federal Register issue opening to relevant page

July 31 2020 Final Rule establishing the large E4 "extension" to the northwest of SIT/PASI: Link to text of docket, link to PDF of entire Federal Register issue opening to relevant page

February 7 2022 NPRM proposing elimination of the large E4 "extension" to the northwest of SIT/PASI: Link to text of docket, link to PDF of entire Federal Register issue opening to relevant page

12
Which parts of class E airspace can an ultralight (part 103) fly in without prior ATC authorization?
4
Does FAR 91.155c apply to class E surface extensions?
3
What indication has the FAA given that phrases like "surface area of Class E airspace designated for an airport" do or don't include E4 "extensions"?

12
Which parts of class E airspace can an ultralight (part 103) fly in without prior ATC authorization?
12
Is it possible for a non-towered airport to have keyhole extensions Class E starting at the surface?
4
Does FAR 91.155c apply to class E surface extensions?
4
Does an SVFR clearance extend to Echo surface extensions?
4
Is the official weather report for an airport in Class D airspace controlling for its Class E surface extension?
10
What is the primary reason that the non-towered airports ACV, TVL, SGU, BIH, and SIT/PASI have E4 extensions to E2 airspace?
3
What indication has the FAA given that phrases like "surface area of Class E airspace designated for an airport" do or don't include E4 "extensions"?
1
In the US, are there any operational control towers located in surface-level Class E airspace or in Class G airspace?
0
Do the NPRMs & Final Rules preceding 1993 "alphabet" airspace re-designation indicate that these phrases were meant to exclude Class E "extensions"?
3
SVFR required when transitioning through class E to the surface?