What specific improvements were made in supercritical airfoil design from 1980 - 2000?

I originally asked a question (Comparisons between the A340 and 747-200 wing: sweep angle and span) about the technological developments which allowed the Airbus A340 to have a wing with greater aspect ratio and lower sweep than the Boeing 747-200 wing, despite being designed to carry roughly the same number of passengers. @Koyovis graciously replied that a lot of the ability to design a lower-sweep and higher AR wing was a result of supercritical airfoil development. However, I had a follow-up question that I was encouraged by other commentators to post directly.

I am curious whether the airfoils on these latter aircraft incorporated any improvements to their supercritical sections over the late-70s - early-80s generation of aircraft? If so, I'm curious as to what specific improvements were made?

What you are looking for are called Phase 3 airfoils.

While initial research focused on avoiding a shock completely at one specific operating point of the airfoil (Phase 1, in the 1960s), Phase 2 airfoils accepted weak shocks for the benefit of a wider angle of attack range in which that shock could be kept weak, so the result could tolerate small deviations from the ideal operating point (roughly in the 1970s).

On the more recent designs (1980s and 90s) another small lift contribution results from a slower pressure drop on the forward edge of the lower side pressure distribution (the forward lower-surface undercutting of Phase 3 airfoils). This gives slightly more lift at the same angle of attack and also lowers the pitching moment of supercritical airfoils.

The reason for the higher aspect ratio of the A340 has little to do with supercritical airfoils but results from more efficient engines.

Note, I found what I believe to be a pretty good answer to my question. As a bit of context, the basic supercritical airfoil design was created in the early 1970s by Richard Whitcomb. I was curious whether the airfoils of ~1990 and beyond, because they were designed using much more advanced CFD tools than Whitcomb's sections were designed with, had improved performance, despite embodying the basic supercritical ideas (which were, generate a region of supersonic lift, weaken the shock wave, move it to the rear, generate lift from the aft using increased camber).

The following image is taken from a lecture given by Frank Ogilvie, the Chief Aerodynamicist on the Airbus A380, at Cranfield University on transonic wing design. He goes through the evolution of HSA (Hawker Siddeley Aviation) and BAC (British Aerospace Corporation) outboard airfoils found on various Airbus aircraft in the 1970s and 80s. The lecture can be found on Scribd, but you need an account to access it. 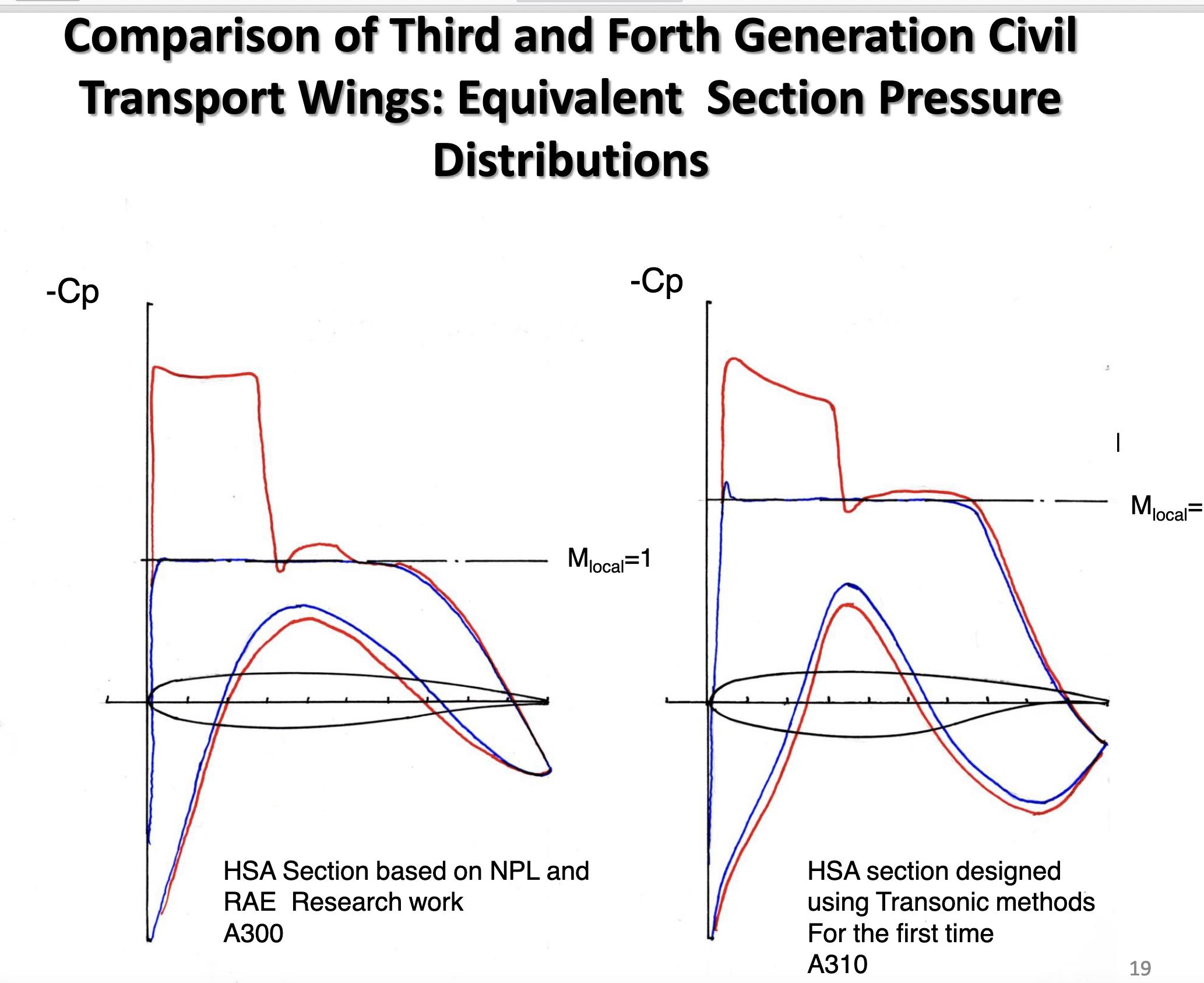 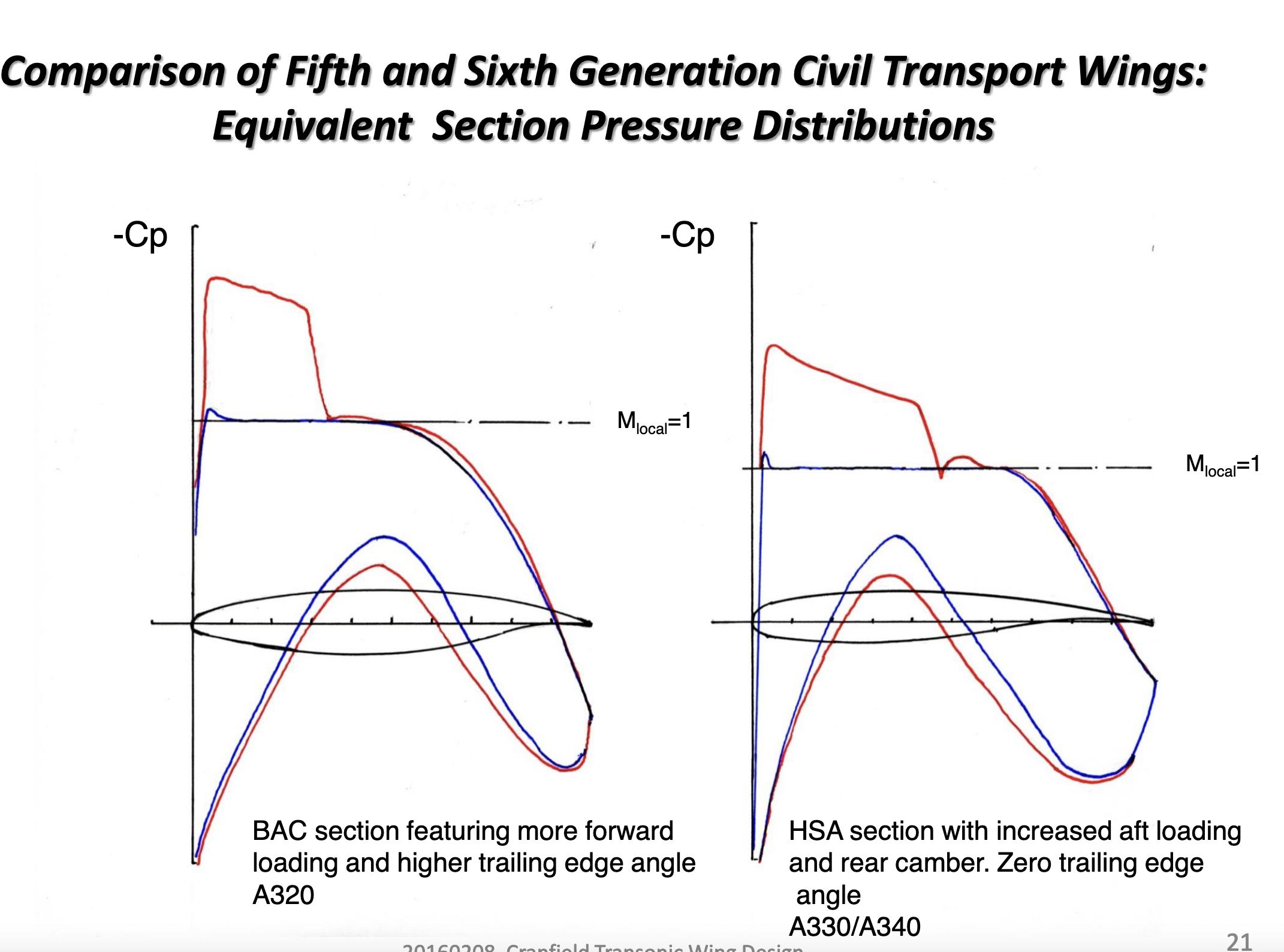 You can clearly see how, in tandem with increasing complexity of CFD codes (from no transonic CFD methods on the A300 to transonic small perturbation methods for the A310 to 3D viscous-coupled full potential codes + inverse design methodologies for the A330/340) the pressure distributions associated with the outboard sections of the wings became more aggressive. The shocks became weaker and they were pushed from 40% of chord to around 55% of chord. This translates to greater lifting performance for a given drag.

Also, note - the reason the A320 airfoils are less aggressive is because they had less space to incorporate the high-lift system on a smaller wing. That's why I have focused on the wide-bodies.

3
Progress in supercritical airfoils - an answer
10
How have engineers managed to increase commercial airliner wing aspect ratios over time?
14
Why does the wing root of the A330 have a pronounced twist?
3
Comparisons between the A340 and 747-200 wing: sweep angle and span

13
What is the method to calculate a finite wing's lift from its sectional airfoil shape?
4
What structural design methods were used for early turbojets?
7
What are the disadvantages (if any) of using a supercritical airfoil?
7
What airfoil design does the MQ-9 Reaper UAV use?
4
What were the J47's turbine blades made of?
4
What are the rules of airfoil thickness from root to tip on tapered wings?
1
How do i find a supercritical airfoil for my preliminary design?
10
How have engineers managed to increase commercial airliner wing aspect ratios over time?
3
What aerodynamic improvements were introduced on the Boeing 787?