What is a "suction airfoil"?

I just stumbled upon this entry on airfoiltools.com:

There is basically no information there and (a quick cursory) web search did not yield anything useful. My search bubble seems to focus on airfoils that actively suck in air to prevent flow separation, which this design apparently does not do?

I think your search bubble is correct. The airfoil profile in the question does, however, defeat the purpose of suction airfoils, as their function is based on suction provided to the upper latter part of the airfoil, accelerating the flow along the upper surface and keeping the flow attached behind the suction point by removing the turbulent boundary layer: 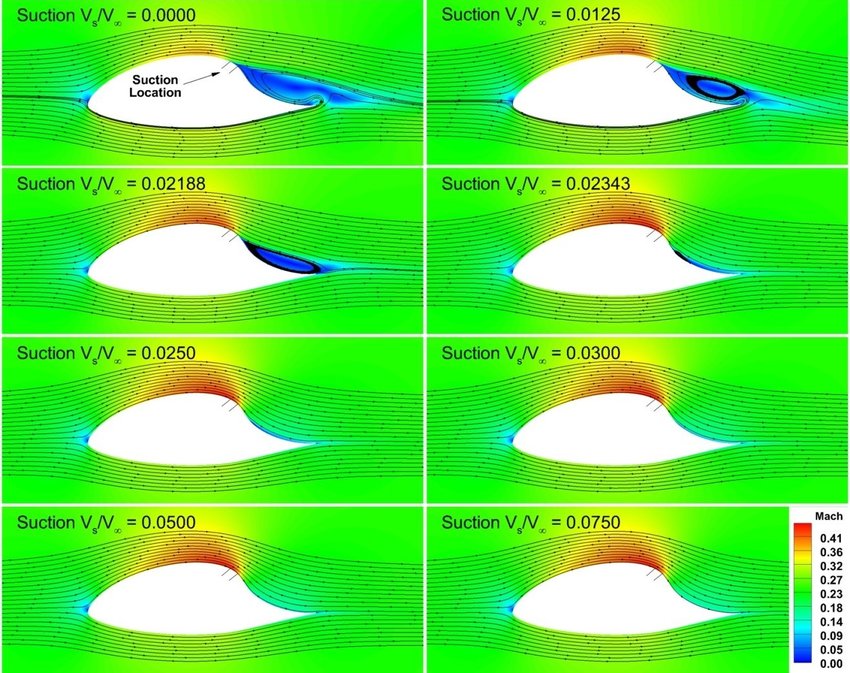 (link to picture on Researchgate site)

A symmetrical airfoil of this design would not provide any benefit as the acceleration of airflow would be present on both sides of the airflow, pretty much negating the effect in any AoA.

The symmetrical form in question does remind me of the Synergy aircraft fuselage profile. Synergy claimed on it's previous, now remodeled website that the fuselage form profile provided positive thrust under certain conditions, assisted by suction provided by the pusher configuration propeller. There is much debate available regarding these claims on the internet, just google "synergy aircraft pressure thrust".

10
Why doesn't an airfoil rotate?
3
What is the best airfoil for Edge 540 Style Aircraft?
2
What airfoil simulation software is suitable for a cut trailing edge?
5
What is the name of this airfoil?
7
What are the conditions for an airfoil to be a "thin airfoil?"
1
NACA Airfoil 0005.4
1
F.X Wortmann airfoil naming convention
4
What are Uses of thin airfoil and thick airfoil?