Can instruments be fixed via a swift punch?

I remember reading a book about private piloting techniques, (I can't remember the title; it has been so long; perhaps I can check my library history or something to see later), and I saw something bizarre.

The author was discussing instruments, and what to do in case of failures. He wrote something about how, in the case of a failure of a critical instrument, in a situation where you really need it, that one should punch out (or otherwise destroy) the glass of the gauge, to allow air into the system.

Is there any way something like this could be useful, or at least theoretically logical? Can anyone deduce any sense out of this?

If the static port gets blocked in an aircraft with no alternate static port, you can break the glass of the VSI (Vertical Speed Indicator) to allow air from inside the cockpit in the static system. By doing this you will sacrifice the VSI in favour of the altimeter and airspeed indicator

Due to venturi effects, air inside the cockpit has usually a slightly lower pressure than the pressure measured by the static port outside your aircraft.

This causes your altimeter to indicate a higher altitude and the airspeed indicator will also indicate a greater speed. The VSI is useless after you break it.

Needless to say this does not apply to pressurized cabins nor to glass cockpits...

When the glass is broken, the chamber will be at the same pressure as the cockpit. Through the calibrated leak, the static system will be levelled with the cockpit pressure, but of course with a delay as well. The VSI will now work in opposite direction (if you didn't destroy the needle). 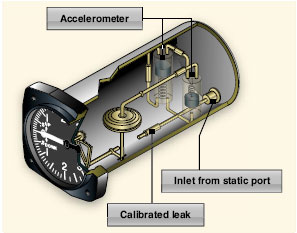 The inner workings of an IVSI

Some VSI apparently have the calibrated leak into the cockpit already. For such VSI's smashing the glass does not work. Here the diaphragm should be destroyed as well.

The FAA Instrument Pilot Handbook (11-8) mentions this as an alternate source if you lose your static source (not vacuum).

That said, I don't think every VSI is identical. I have seen arguments that some are not vented the same way and may not provide a valid static source.

Not the answer you're looking for? Browse other questions tagged flight-instruments gauge failures or ask your own question.

9
Why does the static pressure inside the cockpit vary from outside static pressure?
6
Can a vacuum cleaner create sufficient vacuum to operate the artificial horizon?
10
Do steam-gauge VSIs compensate for altitude?