Are rotary engines the same as piston engines?

For example, I came across Rotron, but it seems like they only make Rotary engines.

You are describing a Wankel type engine, which is not a piston engine, but is a type of 4 stroke "otto cycle" engine.

They have been around since forever (the 60s), and would seem to be ideal replacement for aircraft piston engines, having the simplicity and power to weight approaching that of a turbine. You would think.

But if you read up on the Wankel's history with Mazda, and the numerous attempts to stick them in airplanes, you find they are just riddled with frustrating limitations:

There have been many attempts to make aircraft engines out of multi-rotor Mazdas, and they have flown, but eventually were abandoned due to technical problems (not to mention ear splitting noise levels - I saw an RX7 powered Van's RV-4 at Oshkosh in the 90s - wow what a racket it made, even with a muffler).

Roton is just another case of someone stumbling onto the configuration and making a go at getting around the engine's limitations. The configuration's simplicity and potential reliability is just so enticing.

However, there IS something new under the sun, with a new rotary design that just may be the answer.

Although the Wankel engine is commonly called a rotary engine, in the early days of aviation, there was a rotary engine (which was a piston engine) that shared a lot of characteristics with a radial engine, with the biggest difference that the crankshaft was stationary and the crankcase turned. Here's more information: 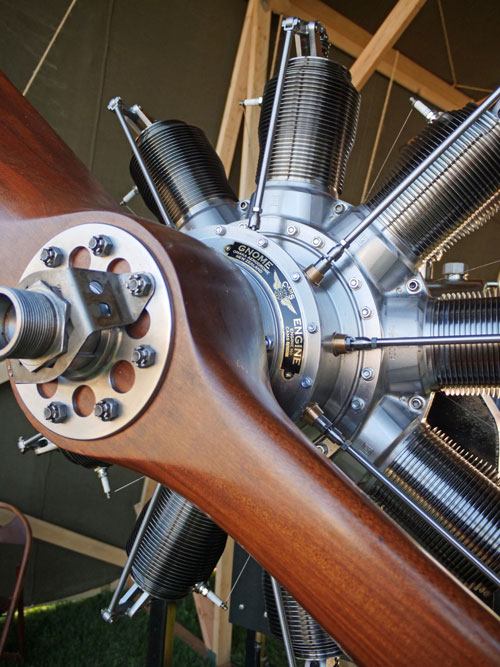 Rotary piston engines are still manufactured. Wikipedia has the following to say about them:

A rotary engine is essentially a standard Otto cycle engine, with cylinders arranged radially around a central crankshaft just like a conventional radial engine, but instead of having a fixed cylinder block with rotating crankshaft, the crankshaft remains stationary and the entire cylinder block rotates around it.

The photo is from a company that makes replica's of Gnome engines, and this article mentions Le Rhône and Oberursel replica's being produced. Rotary piston engines are easy to find!

See JohnK’s answer for an explanation of rotary engines.

The best-known manufacturers of piston aircraft engines today are Lycoming, Continental and Rotax.

Not the answer you're looking for? Browse other questions tagged piston-engine airframe-and-powerplant or ask your own question.

11
What are the differences between Lycoming and Continental engine designs?

22
Why are Inline Engines more commonly used than Radial Engines?
4
How reliable are Lycoming and Continental general aviation piston engines?
21
Why the lack of faster piston-powered planes?
1
Why do piston engines have a lower fuel consumption with higher temperatures?
2
Why are ethanol piston engines apparently cheaper to maintain than avgas piston engines?
1
What is the cooling air exhaust velocity for the piston engine of a propeller driven aircraft?
3
Why are piston-engined aircraft generally exempted from U.S. flight recorder requirements?
1
How do I estimate piston aircraft fuel efficiency?
49
Why are two-stroke engines nearly unheard of in aviation?
0
static thrust vs. prop RPM data?