Where should vortex generators be positioned on the chord line?

Where is the best place for vortex generators? Maybe at the place where airflow speed is highest to induce strongest vortices? 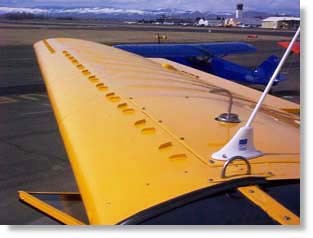 The ideal location is normally identified by experimentation for a particular wing, but is usually just forward of the transition from laminar to turbulent flow when approaching stall AOA.

You want the VG to be in smooth air to create a proper vortice, so it needs to be clear of the turbulent boundary layer. On the other hand, too far forward wastes energy, so there is some chordwise sweet spot, say between 5 and 20% of chord, that you have to figure out.

The maker of the VG kit will work out a preliminary location by computer simulation or by tuft testing, then install the kit on their representative test aircraft with tufts on the wing behind the VGs, and go fly while filming the tufts to observe the results.

If I was going to put VGs on the roof of my car like your other post, I would just tape tufts to the roof and back window and have someone record the tuft behaviour while driving. They will show the flow separation point pretty well, and you would stick your VGs just forward of that.

Not the answer you're looking for? Browse other questions tagged aerodynamics vortex-generators or ask your own question.