How to calculate g load from max lift coefficient?

I calculated for my flight configuration for different angle of attacks (0Â° to 20Â° in pitch) the corresponding lift coefficients for my aircraft (horizontal flight, only pitching).

Could you please help me in this?

maximum load factor I can fly a curve in the horizontal

You are touching on the "accelerated stall" concept. You can pull more Gs with more AoA (increasing Coefficient of Lift), or you can speed up and keep your AoA well below stall. This is why we enter steep turns in a 172 at 90 knots, even though our (level flight) stall speed is around 50 knots.

if I roll to 65 degrees, will my nose pitch down

If you're lucky, yes, you will enter a spiral descent. However, if your AoA is near stall, the outside aileron down wing may stall because it (locally) exceeded it's stall AoA. If it does, immediately reduce pitch before recovering.

can I accelerate my angular velocity by banking ... and pulling on the stick.

As you bank, the elevator does do more and more of the "yaw" through the earth referenced level flying circle, but again minimizing airspeed and maximizing AoA (by pulling the stick) can lead to an accelerated stall.

Iâ€™m going to constrain the possible answers by stating a couple of assumptions that are standard in this sort of example: That you are making a level turn, and that you are keeping airspeed constant.

Question 1: The maximum load factor is a function of the structural strength of the aircraft. You can calculate what it is at varying angles of bank or reference a chart, but either way your limit will be published by the manufacturer as G limits, and is expected to be known by you the pilot. Therefore, instead of calculating your max load factor, you will know your max load factor and can then calculate your max AOB for a level turn.

Question 2: If you do not change anything else then yes, the nose will start to drop and you will descend when you increase AOB. However, this is easily countered with additional power and backpressure to maintain altitude and airspeed. Interpolating the graph below, a 65 deg AOB turn would require approximately 2.5 Gs to maintain altitude.

Question 3: At very steep knife-edge turns, or in a vertical or orthogonal plane, yes. But if you are holding a constant 20 degrees AOB turn and then increase pitch you will simply begin a climbing turn because most of your lift vector points upwards. The only way to increase angular velocity and tighten your turn radius in the horizontal plane is to increase angle of bank and adjust pitch proportionally to maintain altitude. (i.e. get your lift vector pointed in the direction you want to turn and load up the Gs, or "roll and pull...") More power will be required to overcome the additional induced drag and maintain airspeed.

This isnâ€™t a complete tutorial on what makes an airplane turn, but there is plenty of information on this site and in other places that break down and explain the horizontal and vertical components of the wingâ€™s lift. When combined with the chart below this should help you gain a better understanding of the relationship between AOB, G forces and turn performance, and get clarity on your questions. 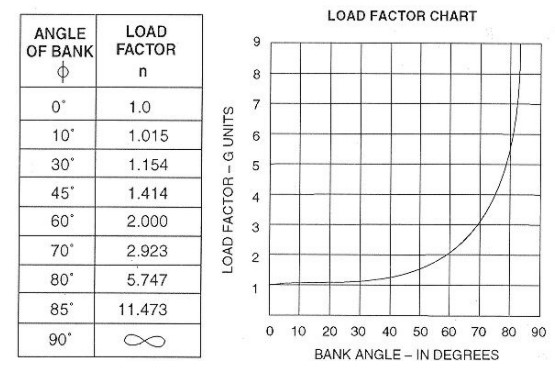 Not the answer you're looking for? Browse other questions tagged load-factor or ask your own question.

6
How will a prolonged series of steep turns produce a stall in subsequent level flight?
3
Does Buoyant Lift Force scale with Load Factor?
14
Why do aircraft have a crossover airspeed, and why does it increase at higher vertical load factors?
1
How does the load factor vary when the aircraft pitches up/down?
1
Can accelerations be used to calculate load factors?
5
How to calculate bending moments and shear forces on a wing?
1
Could drag in a turn be twice the drag of that encountered in straight and level flight?
5
How is it possible that the design criteria for turbulence intensity has nearly doubled, but the manoeuvring load factor is the same?
3
How to calculate sink rate from wing measurements