Why is this angle of attack sensor tab not symmetrical between the leading and trailing edges? 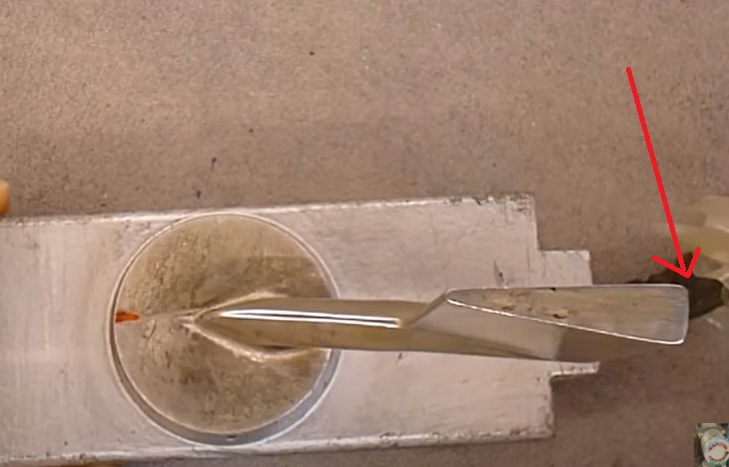 Here is an Angle of Attack (AoA) sensor I took from here. If you are interested to know the AoA detail, just click the link. You may see what is inside it. But not sure what airplane's AoA sensor it was, he didn't mentioned it, but he said from Soviets' airplane. And my question is, why is the trailing edge is not smooth and gradually reduce the tip, not just like wings trailing edge? I mean, in the trailing edge there will be curl or eddy's current. Why didn't it make symmetrical between the leading edge and its trailing edge so it will smoothly release the air?

From a couple of patents it seems it's a preferred shape – example: 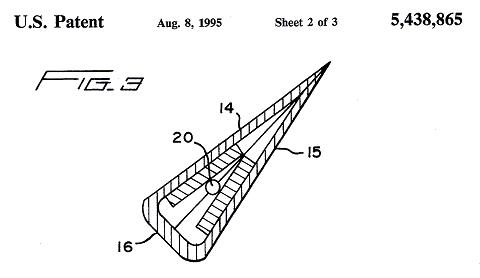 In cross-section, the vane 4 preferably has a wedge shape as shown in FIG. 3 with a narrow or knife-like leading edge.

But why is it preferred?

A 1971 paper on AOA sensor design references a 1967 paper that compared various shapes, which says the single wedge shape is inferior but remains popular due to "vague intuitive reasoning," citing a 1935 work that I'm yet to find. Also a streamlined shape would have bad characteristics because a streamlined shape "is meant to diminish aerodynamic action" at low angles of attack.

So, a streamlined shape is not good, a flat plate is better, and the wedge shape is popular but not for any particularly good reason, and supposedly works well enough.

Also from the 1971 paper, the drag force is negligible and "does not appear in the equation of vane response."

Much google-fu later, another research undertaken by NASA (1976) tested various flat plates of various aspect ratios (among other shapes), with no mention of the cross section. Oscillation damping according to that report is a function of arm length, and is independent of airspeed.

The shape seems to be a combination of a wedge and a parachute, which would adjust rapidly to a change in airflow and have structural strength.

A cone has 10 times more drag than an airfoil, and, importantly, a sharp leading edge that will respond instantly to a change in airflow.

The wedge/drag combination minimizes reading lag from inertial acceleration, allowing for heavier and stronger construction. It looks like a meat cleaver, and will likely last as long too. This would be an important consideration flying through frozen precipitation, such as hail.

A slight "boat tailing" or rounding of the trailing edge, along with the mass of the vane, would render reading fluctuations from trailing edge turbulence much less than the "steering" effect of drag and the leading edge "wedge". In short, the design is rugged and reliably works.

Not the answer you're looking for? Browse other questions tagged aerodynamics angle-of-attack sensors or ask your own question.

32
Why did the DC-3 have wing sweep?
6
What aerodynamic characteristics arise from trailing edge sweep angle?
11
If both propellers and wings are airfoils, then why do propellers deflect air perpendicularly to the rotor, but wings not?
5
Will an Airbus A320 plane go into an unrecoverable nosedive and crash if a single angle of attack sensor fails, like on Lion Air JT610?
1
Why is the angle of attack not proportional to the stagnation point?
8
Why aren't angle-of-attack data sanity-checked before being fed to other aircraft systems?
5
Is alpha induced angle real on 3D wing or just math concept?
2
Blunt noses subsonic drag - why a complete ellipse?
3
Deployment of leading or trailing edge flaps - increase or decrease the angle of attack and critical angle of attack?
1
Does the quarter-chord-angle rule still hold for wings with very long chords or large differences between leading- and trailing-edge sweep angles?