What was the inflight entertainment in the early seventies?

In her 1970 song "This Flight Tonight", Joni Mitchell sings

I'm drinking sweet champagne
Got the headphones up high
Can't numb you out
Can't drum you out of my mind
They're playing Goodbye baby, Baby Goodbye
Ooh ooh love is blind

The Sony Walkman first came out near the end of that decade. So what was Joni listening to on that fateful flight?

I will award a 100 point bonus to anyone who can identify the plane she was on in the song based on the lyrics.

During that time, the in-flight entertainment mostly available on flights was radio1 and/or TVs. Although it was not on all flights. Oops, that is true even today.

The radios may or may not have channels. If they had, there was a knob on the armrest, next to headset jacks, to switch channels. The headsets were pneumatic units like this: 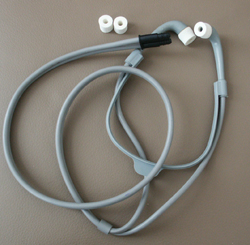 The in-flight movies were shown using one or more common CRT TVs mounted on ceilings or walls and audio could be heard using the headsets. The first time a movie was shown on an international flight was in 1962 by PIA. It was more like the picture below but instead of LCD monitors, there were CRTs. 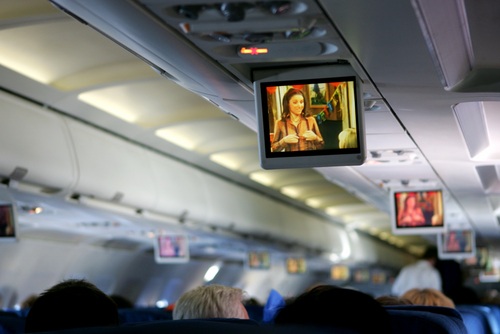 In mid-seventies, Braniff Airways was the first airline to offer video games in-flight.

Wikipedia has a detailed article about the history of in-flight entertainment:

In the late 1970s and early 1980s, CRT-based projectors began to appear on newer widebody aircraft, such as the Boeing 767.

1: Not actually a radio, but recorded audio

There would be a number of channels of pre-recorded 'radio'-type shows, typically 5 or 6 if I recall correctly, such as current affairs, comedy, classical music, easy-listening & pop/rock, plus the movie channel or channels.

Some airlines charged a nominal rental for the headsets, while others provided them in the plastic-wrapped 'travel pack' of blanket and pillow/cushion. Either way, they were gathered up before landing.

The earliest headsets were pneumatic, but later there were electronic ones, albeit with connectors that were pretty much exclusive to airline travel, to discourage them going astray.

I remember flying on planes in the late 70's/early 80's, where there were headphone jacks built into the armrests. But they weren't electronic jacks; the headphones were connected by rubber tubing, and the speakers were actually in the armrest, so the sound was conducted up the rubber tubing to the earpiece.

It made the headphones extremely cheap: they were just molded plastic and rubber tubing.

This is slightly off-topic because it is more about video than sound, however In Flight Entertainment, a Quick Look at its History says,

The popularity of in-flight entertainment didn’t really take off until 1960 with the invention of a smaller, more portable film playing system that would play smaller 16 mm reels. Soon after, the invention of the pneumatic headset would finally resolve the problem of being able to hear over the loud cabin noises. TWA became the first major airline to use the new system boosting them to become the world’s premiere airline to travel on.

The addition of the 8 mm cassette in 1971 made in-flight entertainment a more efficient process, mainly for the flight attendants who could simply change the film during the flight. The video cassette would dominate the way passengers viewed in-flight films until the invention of the DVD which would later become the primary source of all in-flight movies.

Throughout the late 1970s and into the early 1980s, the CRT based projectors began appearing on some wide body airliners. The CRT projector used electric beams of colored light that would beam films onto a fluorescent screen. The CRT was able to display a larger, clearer picture using both video cassettes and laser discs.

Not the answer you're looking for? Browse other questions tagged aviation-history inflight-entertainment or ask your own question.

11
Why were there pneumatic headphones on airliners in the 70's and 80's?
10
Are there any documented example usages of film (ie, film film, not video or digital) for in-flight entertainment?