Is landing gear-up against the regs?

Typically, landing a plane gear-up results in costly damage, which easily triggers the NTSB reporting requirement. However, as a glider pilot I can easily see how landing a glider gear-up would cause no more damage to the plane than a grass stain.

And yet it seems to me that landing gear-up is a somewhat egregious pilot error, about which the FAA and my insurance company might eventually like to know. If for no other reason, the FAA/NTSB probably have a vested interest in tracking if gear-up prevention techniques are working.

Landing an aircraft gear up would likely result in a violation of 14 CFR 91.13 (a) - FAR 91.13 - Careless or Reckless Operation unless you are the owner of the aircraft and no one else is on board.

Endangering the life and/or property of someone else can be viewed as operating "...below the standard of care expected of a reasonable pilot in the same or similar circumstances...," according to the verbiage in the chart in the first image shown below.

(a) Aircraft operations for the purpose of air navigation. No person may operate an aircraft in a careless or reckless manner so as to endanger the life or property of another. (emphasis is mine)

The image below is from page 4-15 of FAA Order 2150.3C - Compliance and Enforcement Program showing the elements of a violation of FAR 91.13 (a), showing, as an example, a gear-up landing (highlighted in yellow). 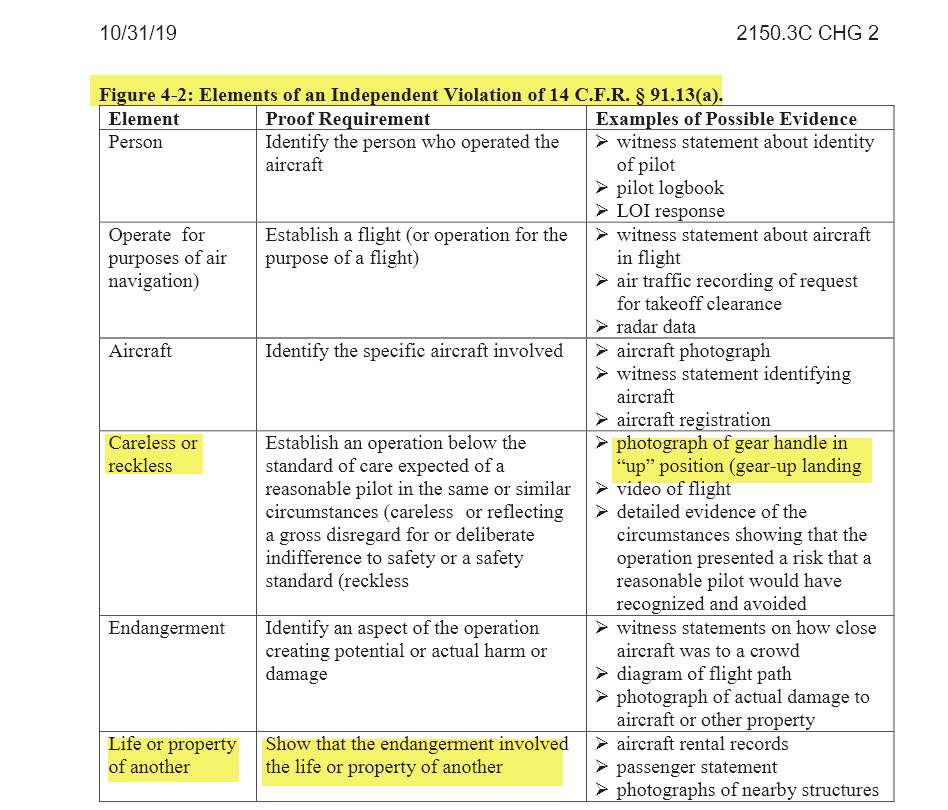 Also note on page 9-22 of FAA Order 2150.3C (image below) a "Wheels up landing" is considered an "Independent Violation" (no other regulation needs to be violated).

During my 5 years being involved with gliding, landing gear up was a relatively common occurrence, either because the pilot somehow forgot to extend it, the gear got stuck or wasn't locked properly in place before touchdown. As long as there was no damage to the aircraft, the aircraft was simply lifted up, checked over by an appointed club MX inspector and released to service again. No report needed filing. If however the aircraft sustained damage or the gear had not extended due to a mechanical failure, that would indeed trigger a report as well as a visit from an "NTSB" investigator. (although this was all EASA / club-regime)

In regards to the insurance, most aircraft insurances will cover damage caused by accidental wrongful operation of the aircraft provided that the pilot was training and checked out according to all standards. If however the occurrence is categorized as the product of gross negligence and carelessness from the pilot, that is an other story.

I can't count the amount of material damage to aircraft and vehicles that was caused in my gliding club because people mishandled material and or made simple mistakes, so as long as it is not intentional, the insurance and no-blame culture will usually have your back... although you premium may rise considerably if it keeps happening.

The FAA has sanctioned pilots for landing gear up, as a violation of 91.13 (careless and reckless).

For example, a case from 2006: Administrator vs. Lorenz, NTSB Order No. EA-5205. There was only minor damage to the aircraft, and no damage to anyone else or anyone else's property. The pilot appealed to the NTSB, arguing that since there was no "potential endangerment" there was no violation. The NTSB upheld the FAA's position and the pilot lost.

Here are a few key points (the case has more details and references to other, previous cases):

In particular, respondent, who holds a commercial pilot’s license, admits that on March 23, 2004, he inadvertently landed a Beechcraft Model V-35B at the Eastern Iowa Airport with the landing gear retracted. The aircraft sustained “minor” damage, and no other property was damaged.

Landing an aircraft with the landing gear retracted clearly creates the potential for injury, death or significant property damage, not only to the aircraft and those aboard it, but to those persons or property that are, or reasonably could have been, in the vicinity of the runway.

Interestingly, the NTSB appears to say that who owns the aircraft is irrelevant, because even if it belonged to the pilot there's still "potential" danger to others who might be nearby:

We need not address respondent’s arguments regarding the aircraft’s corporate ownership and whether it constitutes “property of another” in light of our finding that his gear-up landing created potential endangerment to other persons or property in the vicinity of the accident.

Per an AOPA article, it's unusual for the FAA to pursue a 91.13 case for a gear-up landing:

While there are a few of these cases on the books, our experience has shown that the FAA does not usually choose to take enforcement action in these situations, choosing instead to handle the matter administratively with a reexamination request or remedial training in order to be sure the pilot has the proper procedures in place to prevent a recurrence.

Perhaps in the case of Lorenz, there was more context or other factors that made the FAA bring the case. I couldn't find any more details about it.

Not the answer you're looking for? Browse other questions tagged faa-regulations landing-gear accident-statistics ntsb or ask your own question.

8
Have landing gear collapsed at the gate?
3
How does the landing gear damp vibrations?
61
Is the NTSB hostile to pilots, as depicted in the movie 'Sully'?
3
Which is the technically correct term: Nose Gear or Nose Landing Gear?
6
Do the landing gear modules rotate?
5
Do landing gear doors need repairs after a gear gravity deploy landing?
1
Who decides when landing gear requires an overhaul?
2
Is the KC-135 landing gear life limited?