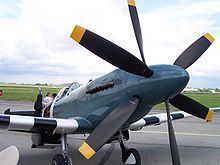 5
Are aircraft with counter-rotating props or Down Between Engines less likely to develop asymmetric icing?
4
Is it possible to have dual contra-rotating rotors on a gyrocopter or gyroplane? Are there disadvantages that would outweigh the extra lift?
18
Are there any aircraft with powered landing gear?
6
If a twin-engine airplane's propellers both rotate in the same direction, do they still produce a left-turning tendency?
5
Do any propellers/propfans use stator vanes? Why is this not a commonplace feature?
3
What are the relative efficiencies of the various stages of a counter rotating propeller?
4
Are there any safety features to prevent reversible-pitch props from reversing in flight?
1
Does counter-rotating propellers on multi engine airplanes have critical engine?
1
What are the advantages of dual counter-rotating rotors vs coaxial rotors?