What is this low wing propeller plane flying near Denver?

I have been trying to identify this plane seen near Denver on August 21, 2021. I have searched online but can’t find any matches. Plane (with smoke) was part of a flyover for a memorial service at Ft. Logan National Cemetery south of Denver around 10am on August 21. 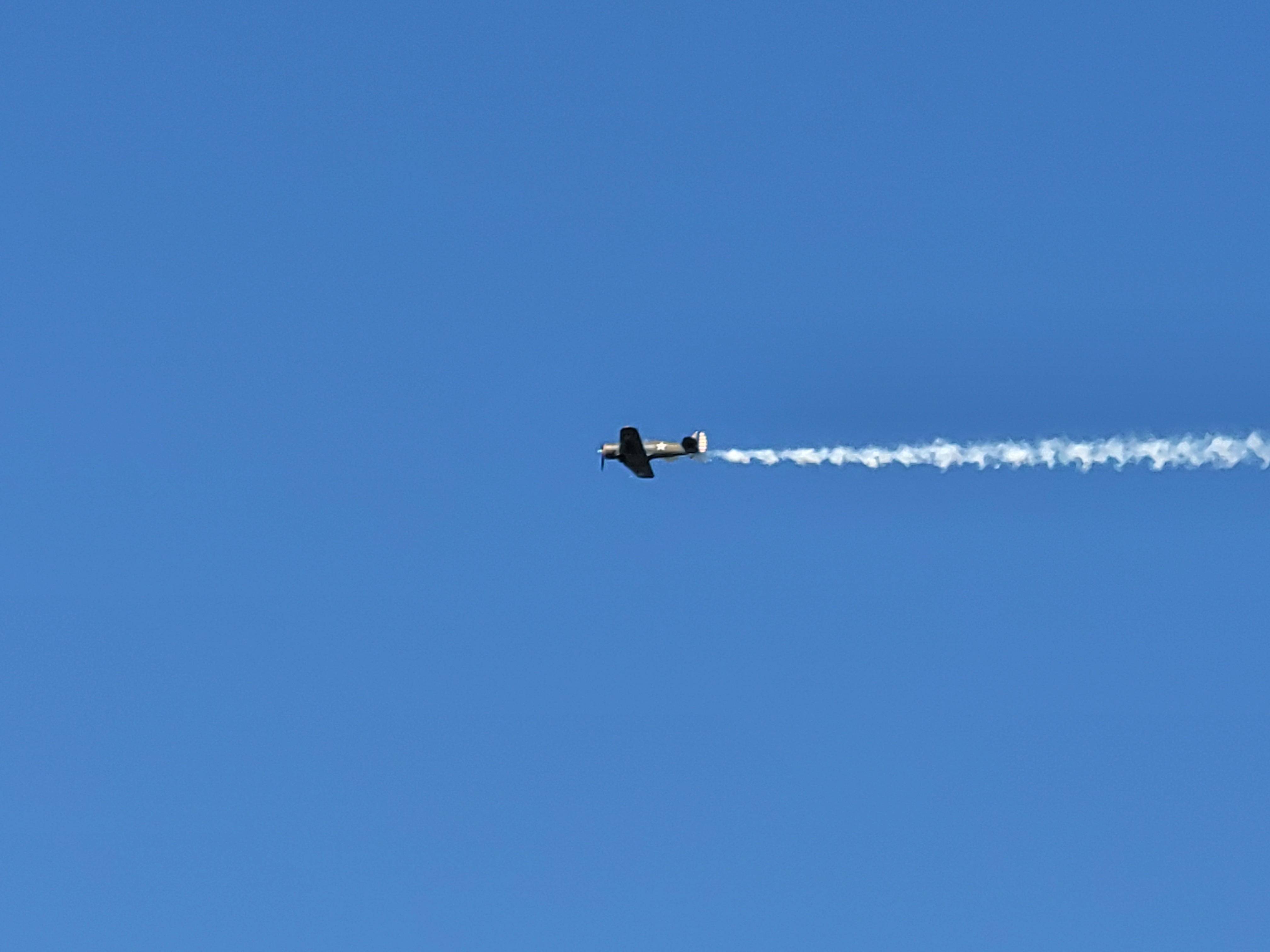 Plane is over Ft. Logan National Cemetery south of Denver around 10am on August 21, 2021. Smoke is part of a flyover for someone else’s service, though I was not able to discover details. My first thought was a Texan due to the wing shape but rudder and canopy didn’t seem to match. An earlier variant is an idea to pursue. Thanks. Perhaps a modification to try to look like a P47?

The plane in the photo is clearly some variant of the North American T-6 / SNJ "Texan", or its precursors. Identifying features visible in the photo include the wing with straight unswept trailing edges and swept leading edges, the shape of the horizontal tail, and the distinctive fairings for the retracted wheels, under the fuselage just forward of the leading edge of the wing.

The North American SNJ-2, a Texan variant, has a rudder with a wide chord (width) near the top and a curved trailing edge, like the aircraft in the question. The photo below came from this website.

The aircraft in the original question appears to be an example of this type or another closely-related variant. (Earlier predecessors to the Texan, while much less common today than the SNJ-2, had similar rudders.) On the aircraft in the original question, in addition to the (obvious) olive-drab paint scheme with early WW2-era US military insignia, note the prop spinner, painted light blue in front, and the three-bladed prop. The engine cowling also appears to have an unusually long chord (width). These features are undoubtedly post-production modifications, and it's unlikely that an early, rare, predecessor to the Texan would have received these modifications, bolstering the case for the SNJ-2 or another very closely-related variant. And the search goes on--

(Link to Wikipedia article on "Texan" variants and precursors) 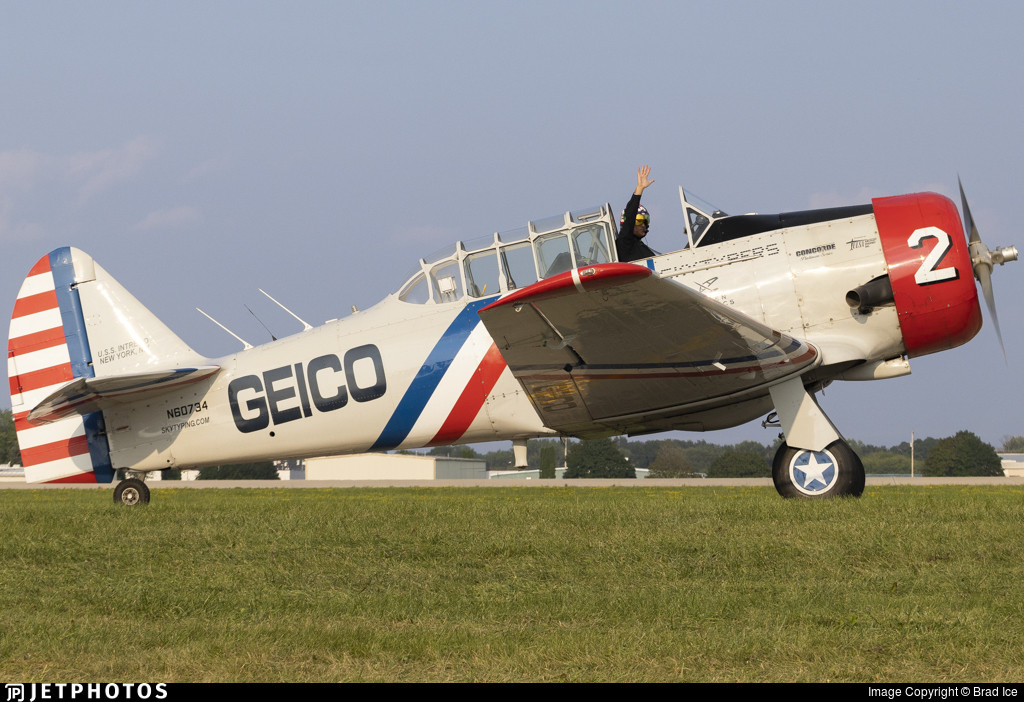 I can't identify the exact tail number, but I believe it's a T-6 or variant. This facebook post from Rocky Mountain Memorial Airport (Broomfield) two days later says "Wondering about that low rumbling and shiny planes you perhaps just saw overhead?" and says it was part of the commerative air force "air power squadron"; they have at least seven planes in the SNJ/T-6 family. They didn't promise which T-6 they were bringing, but they were offering rides in it August 25-29.

So, there was a T-6 in Denver from the 23rd to 29th. It's safe to say it might have been spotted two days before that.

I think it is N9790Z which is a North American AT-6A belonging to the Houston Wing of the Commemorative Airforce. 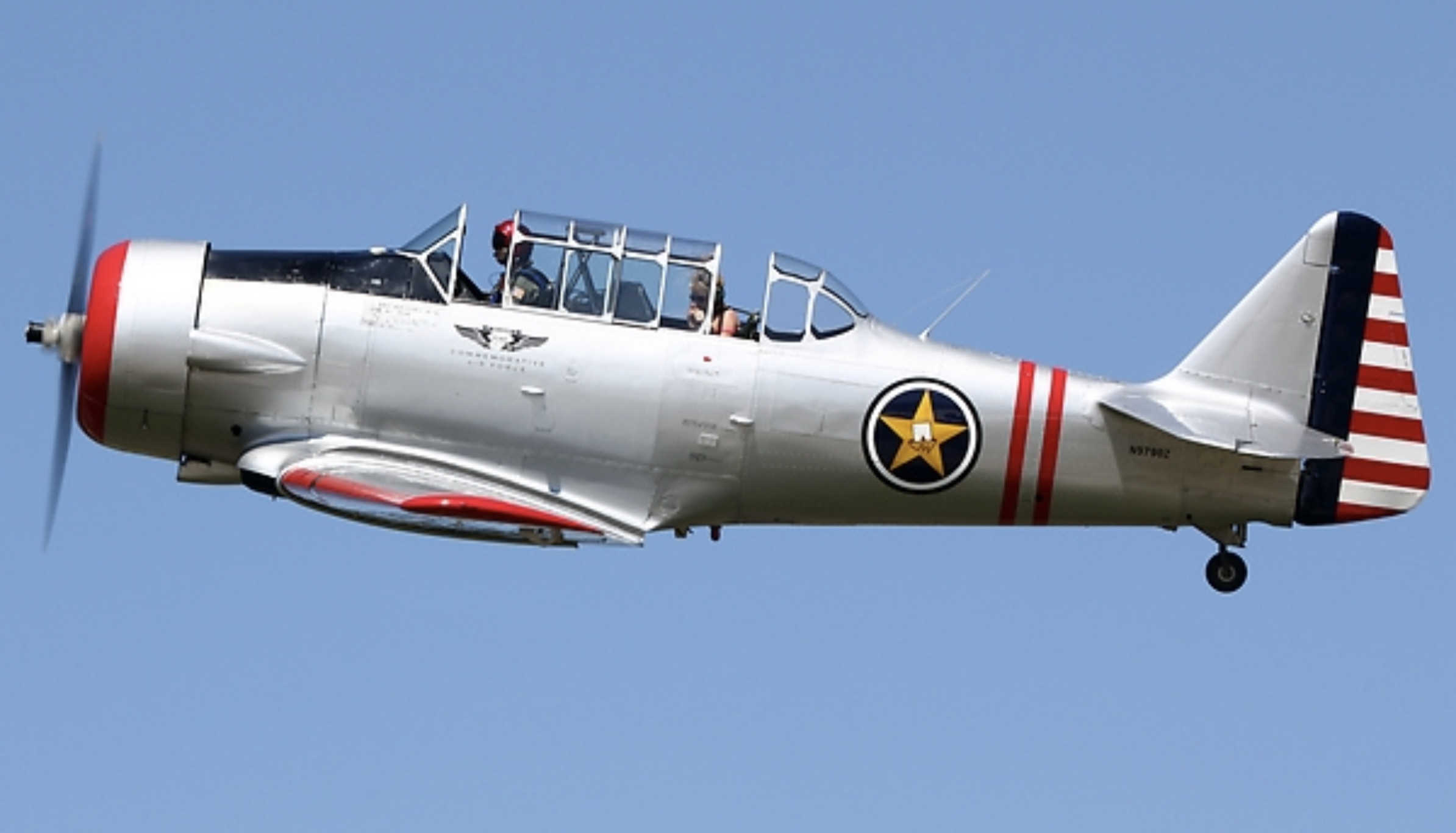 This aircraft is definitely a SNJ-2. Only 61 SNJ-2s were built. The insignia and tail markings are typical for 1942. The dark painted color is typical of the SNJ-2 in Navy service.

These aircraft were built by North American Aviation at the Inglewood California plant prior to 1941, and later as SNJ-3/AT-6s at the NAA Dallas Texas plant beginning in March 1941. An almost exact view at the same angle of one of the Geico SNJ-2 planes trailing smoke may be seen here. The photograph is not reproduced to protect copyright. North American Aviation, by the way, was responsible for the design, lofting, and prototype assembly of the P-51, all in approximately 90 days. War-time production of the P-51 was at the Dallas plant.

The SNJ-2 is the predecessor of the SNJ-3/AT-6A and succeeding variants that were used as pilot-training aircraft throughout the Second War. The AT-6, in particular, and its successive variants, remained in service as a pilot training aircraft well past 1960.

As just a side note, many people incidentally know the answers to these questions and, just to be certain, spend hours doing on-line research to verify, validate, and firm-up an answer given here, on SE-Aviation. Some of this information is not easily derived, is sometimes traceable through anecdotal information or memory, or is discovered hidden in obscure ancillary sites and well documented blogs. Even though pinning down the particulars and validating an answer is hard work, there is still a chance that errors may be present in the answer given. The pieces of the puzzle are many and don't always fit together well. Most of the experts regarding the history and use of these planes are now gone. Not being an expert, this was nevertheless, a very interesting question to answer. Thanks for the opportunity, and the chance at discovery.

that plane has a radial engine, retractable landing gear, a wing with a straight trailing edge and a tapered leading edge, pseudo-military markings, and is being used for skywriting. This means it is probably a T-6 "Texan".