Does this fuel leak from the carburetor of a Cessna 172E need immediate maintenance? 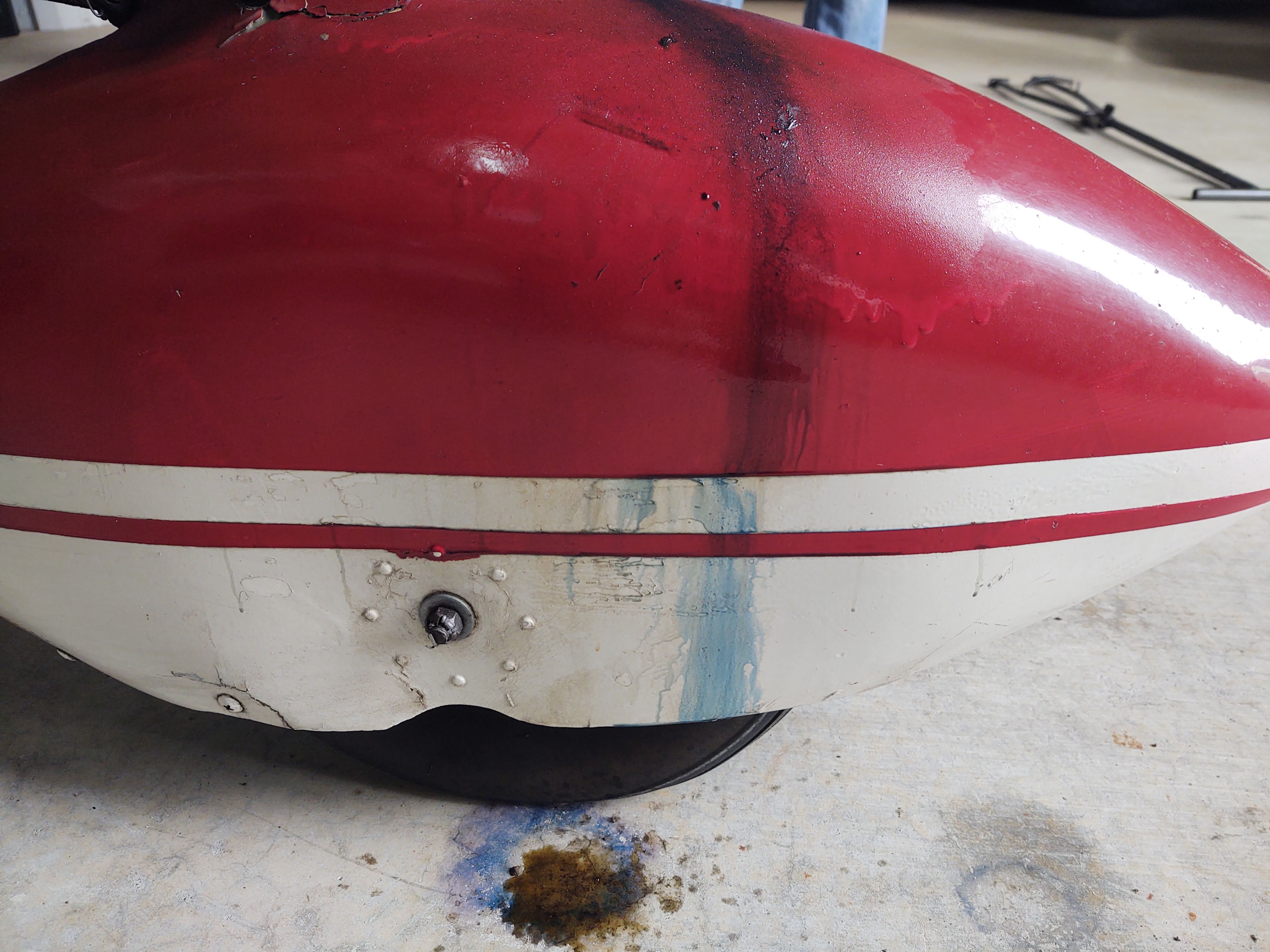 I'm concerned with a fuel leak I've developed on my Cessna 172E in the past three weeks and appears to be coming from the carburetor. There is even some fuel in the air breather near the bottom. An A&P said it’s nothing to be concerned about and everything checked out good he said.

I'm extremely new to this area and don't think I should be seeing blue streaks on the front nose wheelpant and blue streaks coming from the carburetor and air breather filter. It is not a noticeable leak during engine running and appears to only be leaking after engine is shut down for just a short time afterward.

I have also noticed I have a 150 rpm loss at full power on the ground. It used to be almost 2400 rpm on ground and now it’s about 2250 rpm. For the record, it has been getting below freezing the past month and I noticed all this after we did a shortfield landing on a grass strip in Oklahoma.

I'm so concerned that I am scheduling the annual now instead of waiting two more months when it’s due and am also scheduling with a new A&P. What is your opinion? Or am I just being too cautious?

The drips only after shutting down means fuel is coming from somewhere it shouldn't and is being pulled into the engine while it's running, and when there is no intake flow, the fuel dribbles out the other direction until the level of fuel at the source drops below the leak point. This is supported by the low static RPM, that suggests an over-rich mixture. You should look for soot on the exhaust pipe and sooty spark plugs.

There are a number of potential issues with Marvel Schebler MA series carbs. One well known one is foam or brass carburetor floats that start to sink, causing the regulated fuel level in the float bowl to be too high and which tends to flood the engine. When the engine is shut down, the fuel in the bowl may leak out until the level drops below the metering outlet. If the carb float loses all its buoyancy, the engine will flood out and will probably quit on you, so that is something that needs to be addressed.

It's a great idea to get a second opinion. Fuel dribbles after shut-down, with signs of an over-rich mixture, are not normal. Besides the operational problems of the engine itself, fuel collecting into air boxes is a significant fire risk.

It'll probably be easiest just to replace the carb at the annual. An overhauled MA-3 and 4 carb typically used on Lyc O-320s and Cont O-300s costs about 800 to 1000 dollars plus installation.

Here is a link to Marvel Schebler Service Bulletins, where you can learn the various issues with those carbs:

I'd take it to a different A&P as this is definitely cause to be concerned. A 150rpm power loss could be cause by many things: tuning, bad spark, fuel pressure, etc. But, leaking fuel is not normal and there's a brown stain that looks like it could be oil, in which case you have real problems. It could (hopefully!) be something simple and cheap or you could be looking at an overhaul, but you should get it looked at.

I don't generally work with airplanes, but I have seen this on a lot of engines when the carburetor gaskets and/or float valve starts to have various issues. As long as the leak stays small it is unlikely to cause an immediate failure to run.

Eventually, as it gets worse, you'll probably find the engine starting to flood out and stop when not at full throttle.

One way to mitigate the leakage until you can get it fixed may be to turn off the engine by shutting off the fuel rather than by turning off the spark. This will empty the carburetor bowl so hopefully the remaining fuel in the lines won't drip quite as much. (This is also slightly better for a gasoline engine in most cases anyway as it reduces the cylinder wash from unburned gasoline going through the system as the engine spins to a stop. Engines which mix the oil into the fuel being the one exception.)

I would, however, recommend getting it fixed as soon as you can. If nothing else, it's wrecking your paint job and is a fairly substantial fire hazard.

Alright, fuel dripping down and staining your wheel pant is definitely something to address. Engine RPM may differ due to temperature, density altitude, and that Tachometer is not the most accurate thing in the world to begin with. The Tpe Certificate Data Sheet says your prop (Assuming you have a O-300 and a McCauley 1C172/EM 7652, 53 prop) states that the engine during a static run should be no less than 2230 and no more than 2420. You are within the range. Let's really focused on the fuel leak. Where is the fuel coming from? Around the fuel fittings going into the carb? Around the seal between the upper and lower sections of the carb? Is it coming from the throat of the carb? If you can't easily tell, spray the carb down with some paint thinner or alcohol. Just something that will evaporate and clean the old fuel off. Then see where your leak is from. Systematic troubleshooting will save you money. Cessna 172E owner/A+P/IA

A carb overhaul should fix the problem. Your float could be set at the wrong height, sticking. Your needle and seat could be leaking and not maintaining the proper fuel level in the bowl of the carburetor. You could have varnish if a plane has been sitting for some time on the tip of the needle, making the valve not closing properly thus flooding the engine and causing you loss of power.

I’m an A/P. I agree, you probably need a carb overhaul. Your mechanic should be able to do this for you. If you have an older carb, with a two-piece Venturi you may want to exchange yours for a new or overhauled unit. It would have a new-style float, and a one-piece Venturi That would get rid of the ADs against your carb.

I agree with the others that recommend cutting off the fuel supply with the fuel selector. This checks to make sure that it is still functioning 100%, and you can be sure to stop the fuel flow in an emergency. Everyone should perform this check once per week if you fly a lot, or every time you fly if you fly less often. Just my opinion. It is checked on every annual and 100hr, but it won’t hurt to check it more often. Some fuel selectors barely move because people leave them in “both” at all times.

Not the answer you're looking for? Browse other questions tagged aircraft-maintenance fuel-systems cessna-172 or ask your own question.

7
Is a lower CHT on one cylinder cause for concern?
3
How does this fuel pump work?
5
Why does fuel vaporization in a carburetor cause a temperature decrease rather than a rise?
2
When does a turbine need to go to maintenance?
6
How is that there is no leak through the fuel vents during aerobatics maneuvers?
7
Why does fuel vaporize in the carburetor?
3
Why is the fuel pump in the startup procedure for a Cessna 172?
3
Where does fuel from the boost pumps go before engine start?