By aircraft design, excluding engine power, how do you make planes that have a tight turn radius while maintaining speed?

What are all factors in design, excluding engine power and acceleration, thrust vectoring and flight computers, that makes a plane that have a real tight turning radius while maintaining speed? Like larger elevator, light weight etc. Where should the centre of gravity be placed? What are all aspects I need to know?

In a turn you have two opposing effects: In order to tighten the turn, more of the lift needs to be tilted sideways for the needed centripetal force. At the same time, you want to fly slowly so the turn rate and with it the centripetal force stays manageable.

Starting with the equation for the turn radius: $$R = \frac{2{\cdot}m}{\frac{\rho}2{\cdot}c_{L}{\cdot}S} = \frac{v}{\omega} = \frac{v^2}{g\cdot\sqrt{n_z^2-1}}$$ you can see that radius $R$ is directly proportional to speed squared for the same load factor. Hence the desire to fly slowly. If you now plot turn radius in a Cartesian coordinate system with speed on the X axis and turn rate on the Y axis, lines of equal radius fan out from the origin like this: 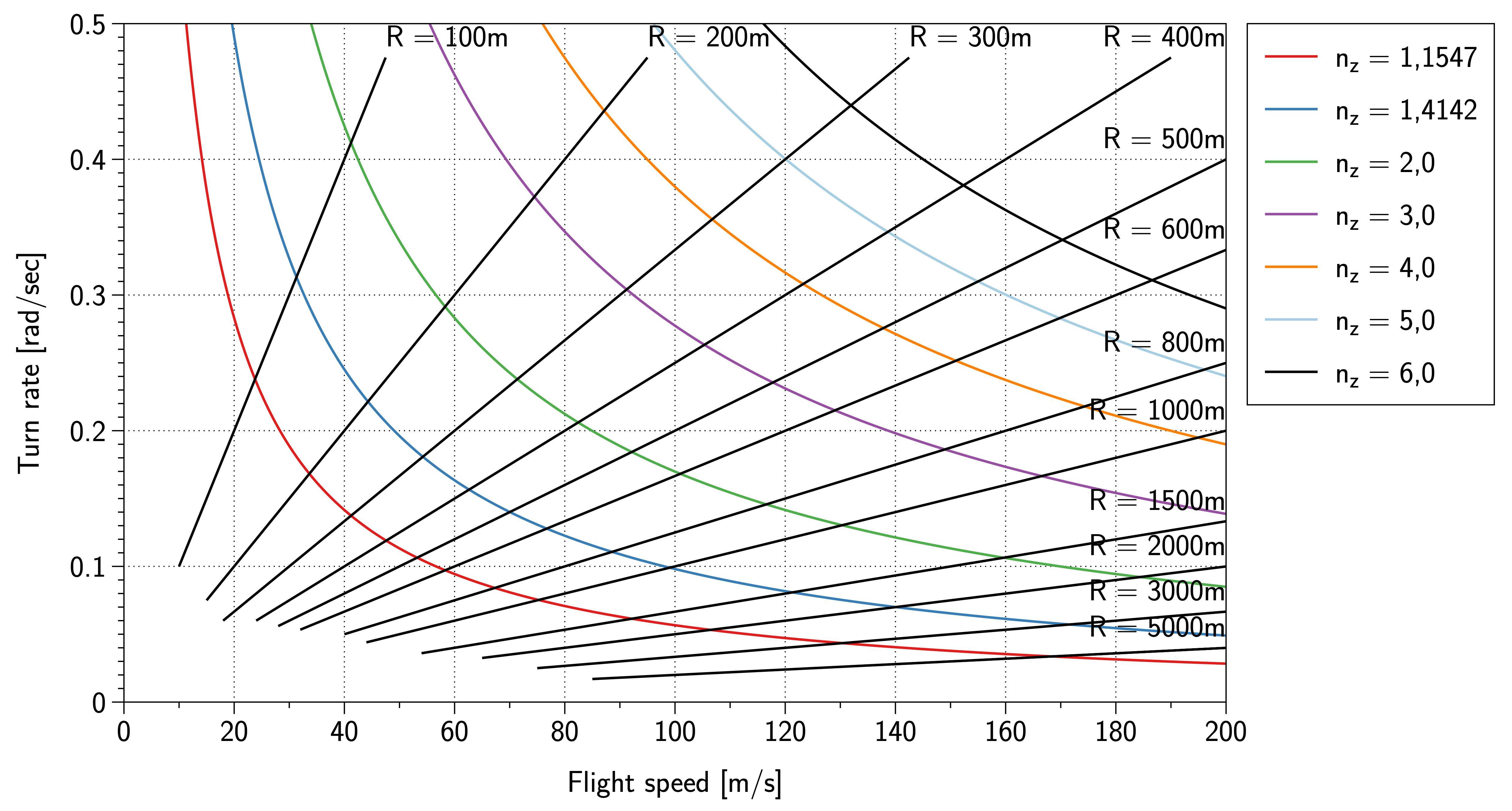 Now there are two boundaries which determine where in this Radius-turn rate relationship an airplane can fly: 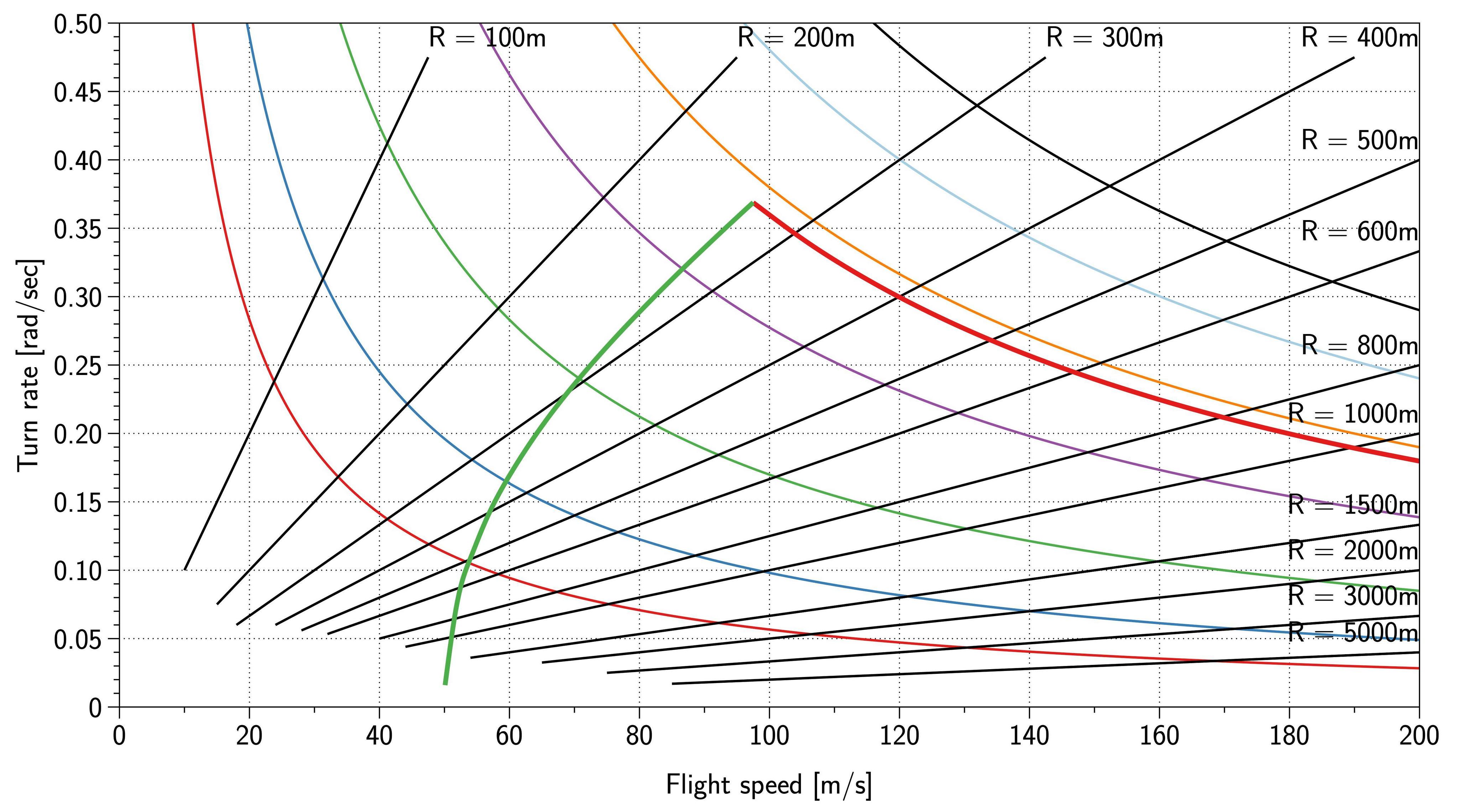 Since compensation of the weight still needs some vertical component of lift (which explains the -1 in the denominator above), the green line creeps up to smaller radii as load factor increases (and the weight becomes less significant compared to the centripetal force). As soon as the airplane flies faster than minimum speed (the area to the right of the green curve), radius suffers.

This means the tightest turns are where the bold red and green lines meet. This minimum radius point can be shifted to smaller radii by:

Of course, it must be possible to power the airplane at the minimum radius point and to trim the resulting pitch speed. Since engine power can be excluded here, the factors which help with a high pitch rate are:

If you have trouble to achieve enough thrust at the minimum radius point, try to increase wingspan in order to reduce induced drag. At this point induced drag has by far the biggest share of overall drag.

This generally means a short wingspan with an extra-strong wing spar structure (to take the lift and G loads), a wing with either high-lift devices that deploy in the turn or a relatively thick wing profile, no fuel tanks or excess mass in the wing itself (to minimize the axial moment of inertia of the airframe), big ailerons (to generate a large rolling moment), boosted controls (so a human is capable of working those big control surfaces) and a big engine (to maintain altitude & airspeed during the turn).

You'll find most of these design features in an aerobatic plane or a fighter.

8
How to calculate angular velocity and radius of a turn?

1
Would it make sense to test the performance and handling of a prototype aircraft by mounting a free moving mock up on a track (like a rocket sled)?
5
Why weren’t large, high-power radial engines built to take advantage of the Meredith effect?
2
What are the disadvantages of a tailless ultralight design?
4
Why this inertial regulator of dragonfly wing pitch reduces self-excited coupled flapping and feathering vibrations and improves gliding flight speed