Ask Question
Asked 3 months ago
Modified 3 months ago
Viewed 208 times
0
$\begingroup$
Closed. This question needs to be more focused. It is not currently accepting answers.

1. On a Jeppesen IFR low enroute chart, there's occasionally a different altitude below/next to the MEA with a "T" next to it. (For example: V16 between GACEB and SHAKY, there's a "2900T" next to the 4500 MEA.) What is this "T" altitude?

From page ENROUTE-6 on the Jepp legend: 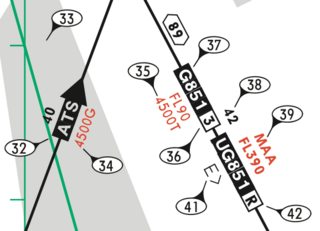 This corresponds with the Government chart which has, on V16 between GACEB and SHAKY, the MEA 4500 above the MOCA *2900.

The 2012 Jepp legend does not list what a "D" suffix means on an altitude, but it does say (referring to the above screengrab)

We can compare to the Government legend: 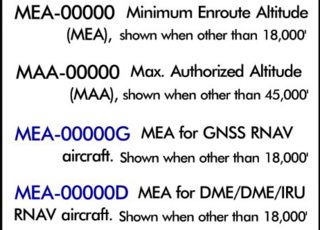 Not the answer you're looking for? Browse other questions tagged aeronautical-charts jeppesen or ask your own question.

6
Why are there GPS MOCAs?
2
How are aeronautical charts made?
2
What time do NOS IFR Charts expire?
10
What is the primary reason that the non-towered airports ACV, TVL, SGU, BIH, and SIT/PASI have E4 extensions to E2 airspace?
4
May the Class-E-to-surface airspace near Eagle County Regional airport (KEGE) and Marshall AAF (KFRI) be ignored when the tower is open?
5
What’s the grey altitude depicted in the profile view on Jeppesen charts?
2
What does the * (asterisk) next to radio and nav aid frequencies on Jeppesen charts refer to?
12
Where are the "Admitted Aircraft symbols" on Jeppesen VFR aerodrome charts defined?
1
Are Jeppesen Approach, SID charts in Magnetic North or True North?