A request to check old issues of the Airport/Facility Directory (1994-2001) -- when did this content first appear in the Legend?

Ask Question
Asked 10 days ago
Active today
Viewed 344 times
1
$\begingroup$
The bounty expires in 6 days. Answers to this question are eligible for a +500 reputation bounty. quiet flyer is looking for an answer from a reputable source:

Any answer that can further narrow down the time window in question, in comparison to previous answers, will be awarded a bounty.

NOTE: AIRSPACE SVC TIMES INCLUDE ALL ASSOCIATED ARRIVAL EXTENSIONS. Surface area arrival extensions for instrument approach procedures become part of the primary core surface area. These extensions may be either Class D or Class E airspace and are effective concurrent with....

Arrival extensions for instrument approach procedures become part of the primary core surface area. These extensions may be either Class D or Class E airspace and are effective concurrent with...

first appear in the legend (for the "AIRSPACE" item) near the front of the "Airport / Facility Directory" (now "Chart Supplement") published semiannually by the FAA?

(For a current example of this text, see page 26 of the January 27 2022 issue of the Chart Supplement for the "Northeast" region -- link to PDF here.)

At present I've learned that this language (the second example in particular) was definitely present in May 2007 (referenced on page 6 of this PDF). It logically would not have been present before the September 16 1993 "alphabet" airspace re-organization, or at least not before the "extensions" started being plotted on the charts to prepare pilots for the coming changes (likely starting October 15 1992 as noted in this related ASE answer).

Edit-- the intent is not simply to find language establishing that the effective times of the "extensions" are simultaneous with the effective times of the adjoined core surface area, but rather to find examples of statements that the extensions become part of the adjoined core surface area. Examples from publications other than the Chart Supplement / Airport Facilities Directory are also of interest, so long as they fall within the time window of interest noted here. Similar language appears in the Aeronautical Information Manual (section 3-6-(e)(2)), but wasn't added until the 2016 edition.

Edit: recent answers have established that this language was not present in the editions of the Airport/ Facility directory effective August 18 1994 to October 13 1994, and was present in the editions of the Airport/ Facility effective beginning May 17 2001 and ending July 12 2001. So the time window in which it is unknown whether this language was present or not, currently spans editions effective October 13 1994 to May 17 2001. Any answers that can narrow down this time window, in comparison to any previous answers, would be welcome-- (and will be awarded the maximum possible bounty, retroactively if the current bounty has expired.)

Earliest I could find is from the Chart Supplement Pacific, 17 May 2001. Section 22 "airspace" has the phrase you seek. 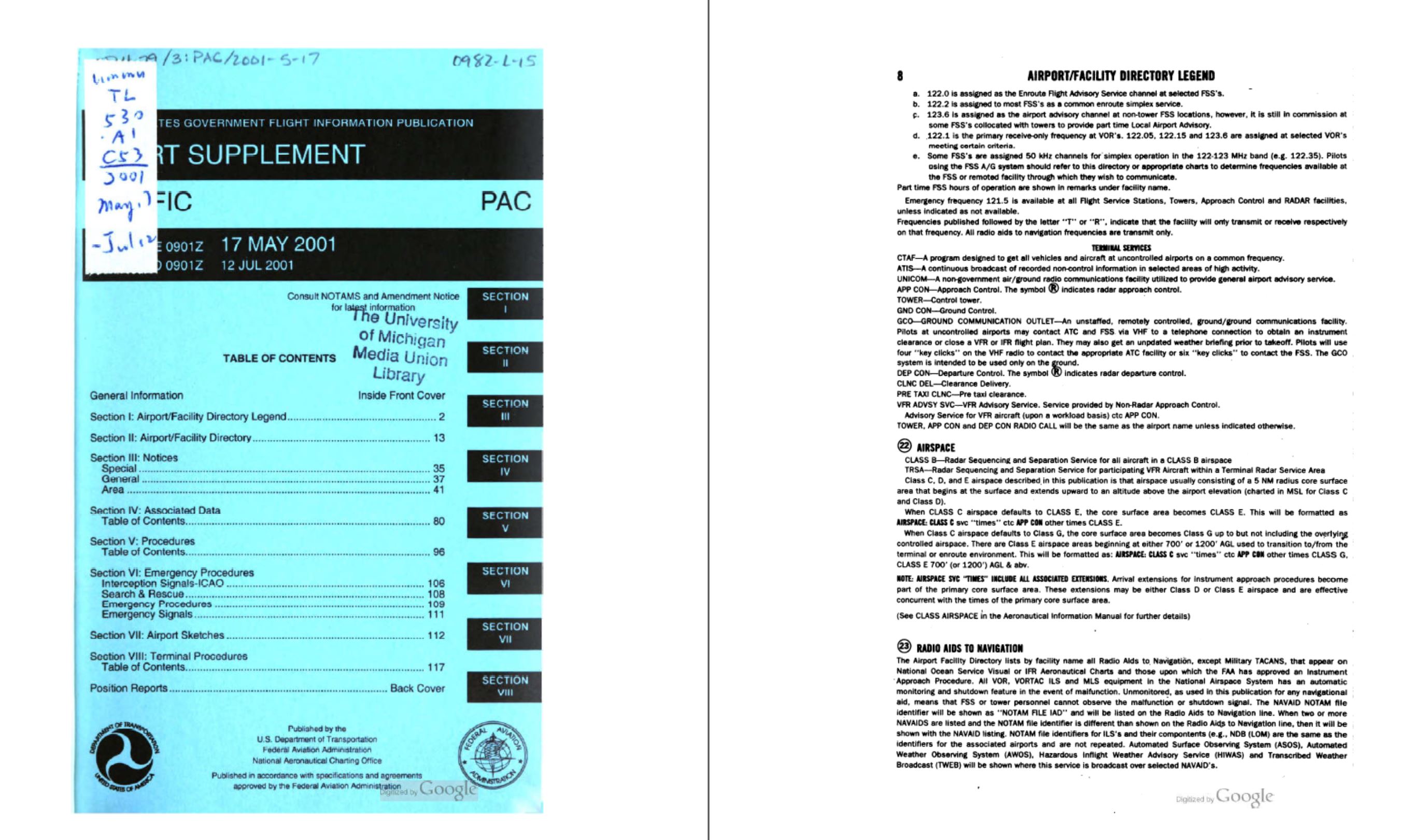 This is a dismal answer, but:

The partial scan found on the page I linked above matches the formatting of official Airport/Facility Directory Legend -pages.

One can thus conclude that language in questions has been used at least since 2003, and even though the document I linked is not an Airport/Facility Directory, it clearly uses one as a source/example.

Instrument Rating Test Prep 2003, published 2002, does not cite either paragraph mentioned in the question, but although the whole book is most likely scanned into the Google library project, the search may not be able to find all contents reliably. So a definite conclusion cannot be drawn that such language was not used prior to 2002.

Here is a source that establishes the use of the specific phrase you mention coincident with the 'airspace redesign'. It seems to clarify the timeframe you seek but is not in the publications you specify, so I put it here separately. The document deals with charting implications of the ambiguity you describe. 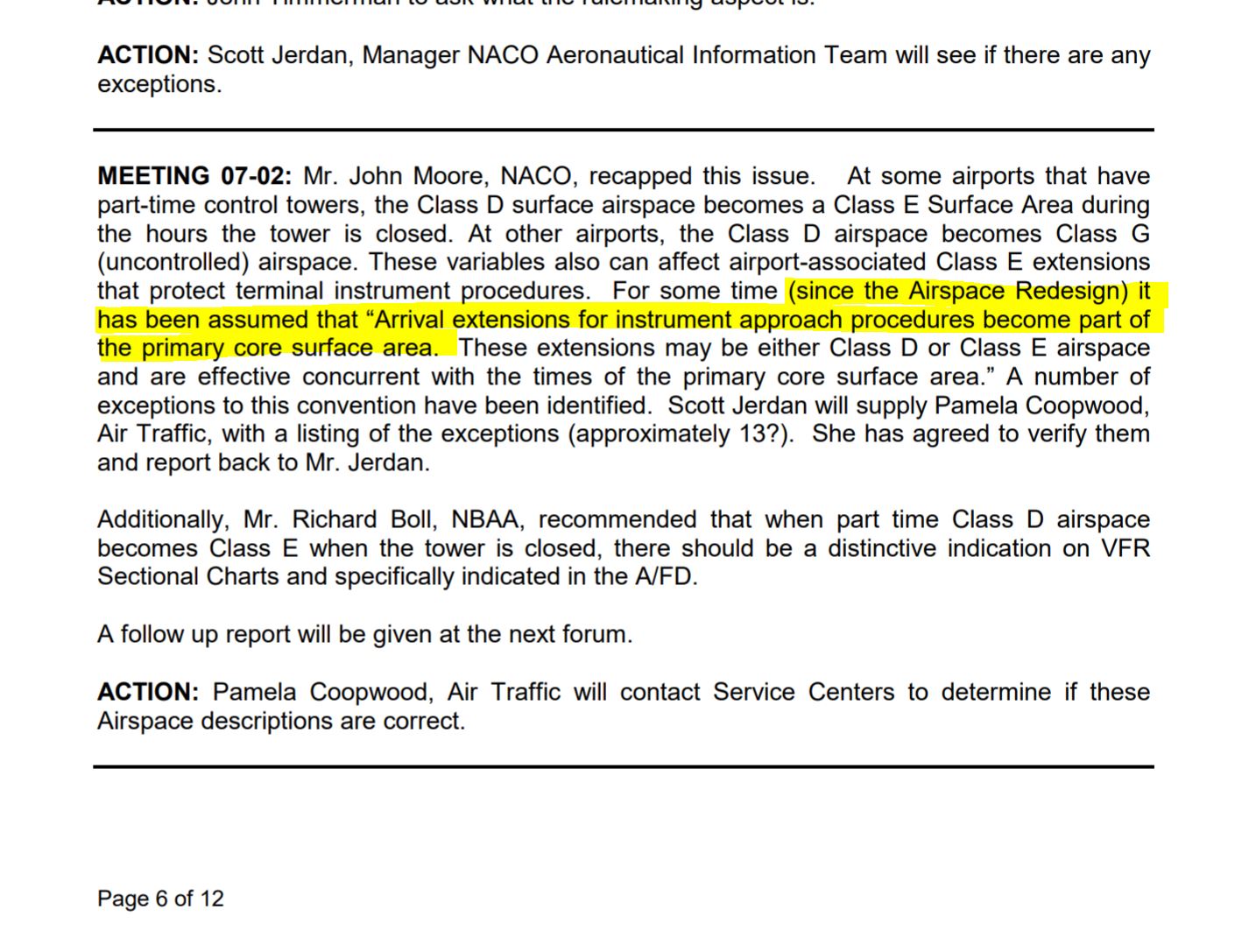 The front page of the document for reference. 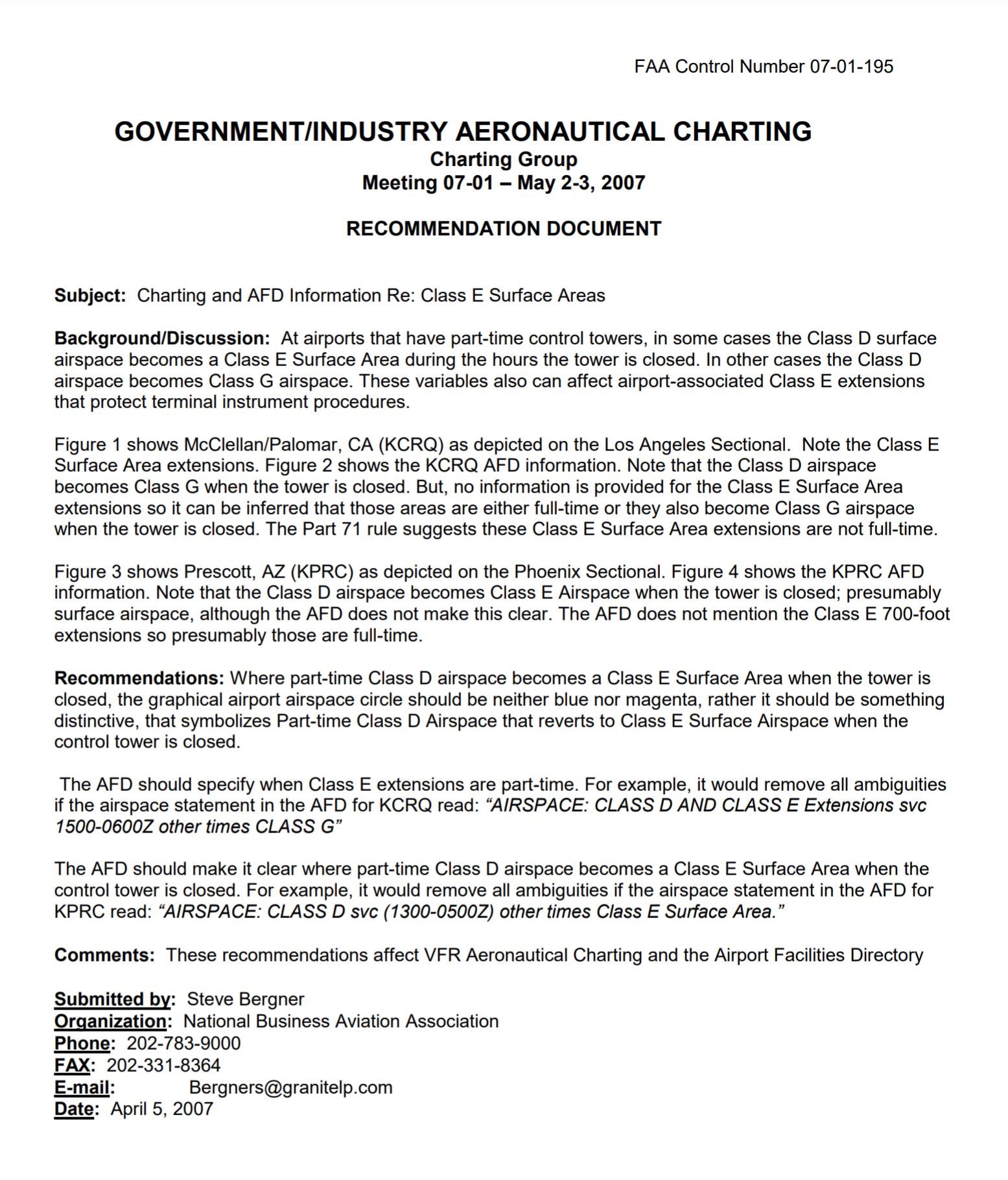 A visit to an air museum with an archives library turned up several old copies of Airport/Facility Directories, one of which helped to narrow down the time window for this question. 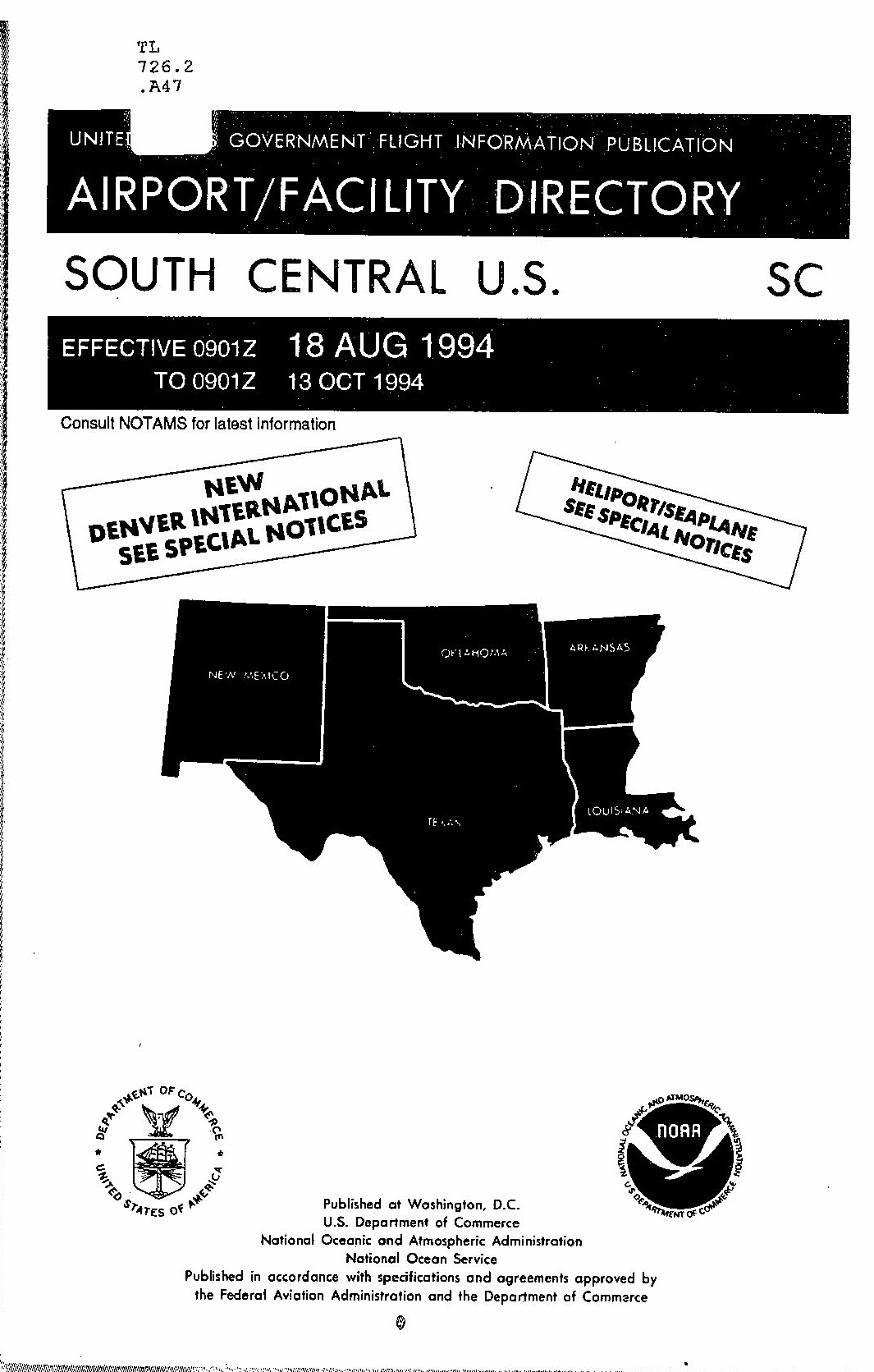 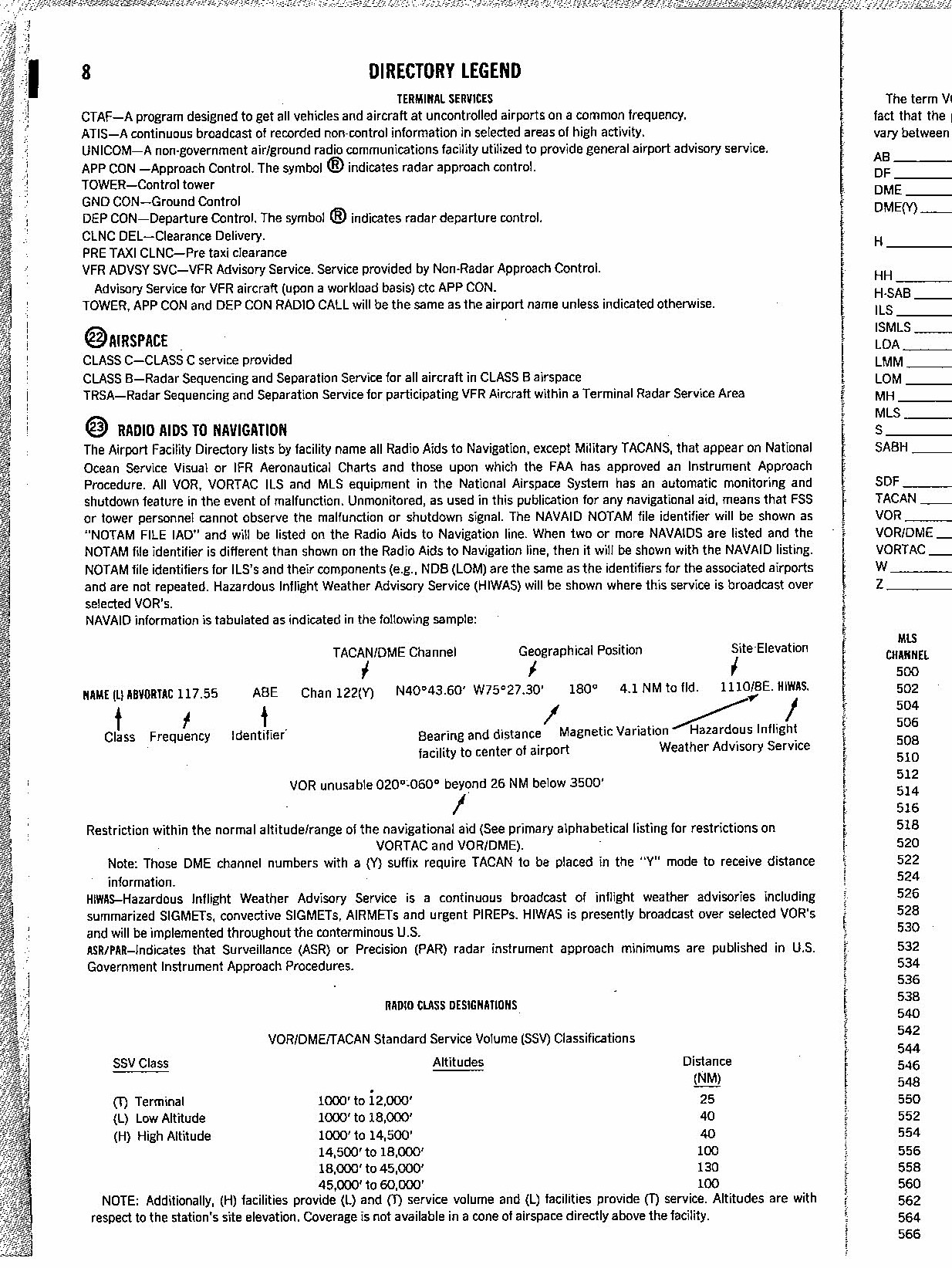 Not the answer you're looking for? Browse other questions tagged aeronautical-charts class-e-airspace chart-supplement or ask your own question.

12
Which parts of class E airspace can an ultralight (part 103) fly in without prior ATC authorization?
3
Does an SVFR clearance extend to Echo surface extensions?
2
What indication has the FAA given that phrases like "surface area of Class E airspace designated for an airport" do or don't include E4 "extensions"?
1
Re old (1992) US VFR sectional charts-- when was the thin dashed magenta line first used?

12
Which parts of class E airspace can an ultralight (part 103) fly in without prior ATC authorization?
12
Is it possible for a non-towered airport to have keyhole extensions Class E starting at the surface?
12
When is this Class D airspace not Class D airspace?
5
What class is the airspace at KGCN when the tower is closed?
4
Why do some airports have class E airspace to the surface only at certain times?
10
What is the primary reason that the non-towered airports ACV, TVL, SGU, BIH, and SIT/PASI have E4 extensions to E2 airspace?
4
May the Class-E-to-surface airspace near Eagle County Regional airport (KEGE) and Marshall AAF (KFRI) be ignored when the tower is open?
2
What indication has the FAA given that phrases like "surface area of Class E airspace designated for an airport" do or don't include E4 "extensions"?