What's the relationship between mach number and drag force on an airplane? 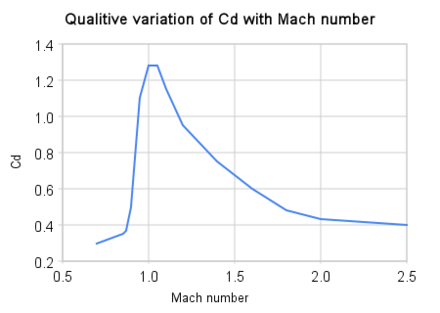 It's easy to find plots representing experimental data for Cd vs M, but I wonder what's the relationship between drag FORCE and mach number. I wasn't able to find a plot for this. I wonder if an aircraft that can reach Mach 1 can automatically reach say mach 1.2, given that even though Cd drops the drag still increases with the square of speed (and engine power required is cubed)

The amount of drag is related to the coefficient of drag by the following formula:

That last value may require some explanation. Drag is typically measured directly, such as in a wind tunnel, rather than being calculated. It's the coefficient that's usually calculated, and to do so, you need to pick an area. You can use the frontal area of the aircraft, the total skin area, or certain other areas. Each choice of reference area will yield a different value for the $C_d$, so to get from the coefficient back to the actual drag force, you need to know the reference area that was originally used to go the other way.

Aerodynamic drag is described in the form of a product of:

Engine power cubed is of very little relevance in this situation. High subsonic and transsonic aeroplanes are powered by jet engines, which deliver exhaust thrust.

Not the answer you're looking for? Browse other questions tagged aerodynamics drag supersonic mach-number or ask your own question.

15
What are the limiting factors for high altitude planes (e.g: U2 or SR71) preventing them from going higher?