Ask Question
Asked 5 days ago
Active 5 days ago
Viewed 90 times
0
$\begingroup$
Closed. This question is off-topic. It is not currently accepting answers.

Below is my steps trying to solve this question.

Step 1: Found below graph from this article showing that vessel's rudder angle (guess it is a close case study) should be in a quadratic equation to the radius like radius = a * rudder_angle^2 + b * rudder_angle + c 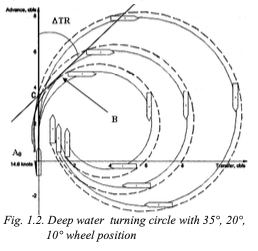 Then, assume all factors are fixed, any suggestion for the next step to prove the relationship or coefficient between rudder angle and bank angle? Thanks.

Then, assume all factors are fixed, any suggestion for the next step to prove the relationship or coefficient between rudder angle and bank angle? Thanks.

There is absolutely no relationship or coefficient between rudder angle and bank angle in an aircraft turning. Your understanding of aerodynamics is incorrect and your theory is flawed.

An aircraft rudder is only there to control yaw. The effectiveness of the rudder also can’t be quantified by the rudder angle alone because there are too many variables.

You are mixing two completely different effects here. With a boat, the rudder is the primary steering control, while with an airplane, the bank angle is the primary driver of a turn, and bank angle is controlled by varying the roll rate with the ailerons. And naturally, a roll rate of zero is still compatible with banked flight, so we can still be turning even with ailerons and rudder centered. (The subtle yaw and roll trim effects that comprise the basis of lateral "stability" will be left beyond the scope of this brief answer.)

I won't try to assess the accuracy of the article about boats, but I can tell you that, depending on the airspeed, the bank angle, the shape of the aircraft itself (e.g. high aspect ratio sailplane versus medium aspect ratio light plane versus low aspect ratio jet fighter), and whether or not any thrust asymmetry exists (e.g. p-factor), in a constant-bank angle turn, for optimal "coordination" (yaw centered or slip-skid ball centered), the rudder may be need to be kept significantly deflected toward the inside of the turn, or no significant deflection may be needed. (Deflection toward the outside of the turn would be unusual, except to compensate for p-factor.) The rudder required for optimal coordination while actually changing the bank angle (rolling) is another matter; generally the rudder must be deflected toward the descending wingtip, especially with high aspect-ratio aircraft.

But to a very rough first approximation, airplane turning dynamics are all about the bank angle, and the rudder can be considered optional. Many small, fast, low aspect-ratio radio-controlled model airplanes have no rudder at all, and still are very maneuverable and aerobatic, apart from snap rolls, spins, knife-edge flight, and other such sideslip-based maneuvers.

The dynamics of a turn involve bank angle AND the weathervaning effect of the vertical fin (the rudder has a secondary function) (plus pitch, but we'll leave that part out to keep it simple).

When you bank, the wing's lift vector is tilted, and the lateral force introduced by the tilt drives the aircraft sideways (it sideslips). Without a weathervaning effect, it would move laterally while remaining pointed in its original direction; just continue sideslipping. This sideslip happens initially (briefly) when bank is first applied, and is critical for dihedral effect to work for roll stability.

So the bank makes the plane slew sideways, the fin develops lateral lift in response (after a slight lag to allow dihedral effect to do its thing in the event you didn't actually want to bank), and rotates the body about the yaw axis to reduce the angle of attack on the fin to near zero.

So the airplane banks, starts to slew sideways, but immediately afterward the weathervaning effect of the fin rotates the body in yaw to keep the body aligned into the airstream and the sideways motion is accompanied by a rotation that makes the airplane follow the arc of the turn.

So rudder application is used to adjust the camber of the vertical tail, to apply force beyond the basic weathervaning effect, to cancel out the yawing moment created by adverse yaw from the ailerons. If the ailerons are neutral while banked, little to no rudder is required because there is no adverse yaw.

So for a turn:

Not the answer you're looking for? Browse other questions tagged aircraft-design aircraft-physics flight-dynamics or ask your own question.

10
How does turn radius change with velocity between Vm and Vs, as in a 180 degree turn in a canyon?
5
What is the time derivative of the angle of attack?
3
What is the formula for the bank angle required for a turn in line-abreast formation?
1
How much force is produced by control surfaces?
20
Can a plane bank without turning?
3
Is the turn radius at fixed bank angle really independent of aircraft type?
3
Is the elevator really an 'angle of attack control' as described in Stick and Rudder?
1
Calculating angle of attack during bank
1
How do you quantify rudder effectiveness as a function of bank angle?
0
Calculate speed by turn angle and distance