I'm trying to combine two rate of turn formulas, which I found it online this and this.

The second is ROT = speed in knots / radius 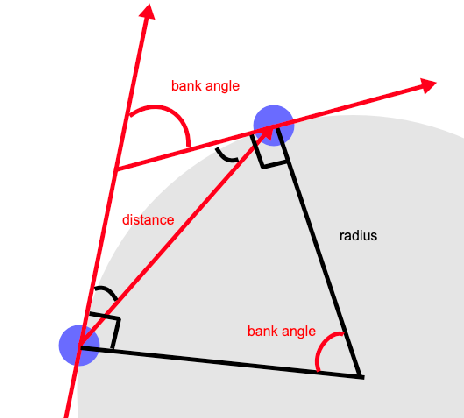 Below is the calculation I got. It shows higher bank angle, higher speed and lower turn radius. Does this make sense if the angle-of-attack is fixed? Or I have some wrong calculation? Thanks.

To combine these two formulas,

If we remain in the SI metric unit system, this answer finds 2 equations:

Equation 1. is for an aeroplane making a coordinated turn, keeping altitude. Equation 2 is not concerned with keeping altitude. Your second equation ROT = speed in knots / radius boils down to V = $\omega \cdot$r, take any V and any r.

No need to compute a distance, however a protection against divide-by-zero is required.

Below is the calculation I got. It shows higher bank angle, higher speed and lower turn radius. Does this make sense?

If we specified that angle-of-attack were fixed, so that airspeed increased as a function of wing loading, then it would make perfect sense that banking steeper would result in both a higher airspeed, and a smaller turn radius.

But that doesn't appear to be what you are doing here. You don't have any formula relating to wing loading. You have too many outputs and not enough inputs -- the only input appears to be bank angle. That's not enough information to draw any valid conclusions about airspeed or turn rate.

If turn rate and bank angle were both inputs, then we could compute the airspeed. But that doesn't appear to be what you are doing.

It appears that you need to start over with a fresh "clean sheet" of paper and fundamentally re-think your approach here.

Rate of turn (ROT) is the number of degrees of heading change that an aircraft makes in a set period of time. It is measured in degrees per second or degrees per minute. The formula for ROT is simple. It is the radial G divided by the aircraft true air speed.

Radial G is the acceleration in the direction you are turning. It is measured in acceleration units, distance per time squared (say meters per second squared), and Velocity of course is in Distance per time (Meters per second). When you perform this division the meters and one of the seconds units cancel each other, and what you have left is something per second. By definition, this is an angle measured in radians ( approximately 57 degrees ) The first formula you are using

is derived from the above by assuming level flight (no climb or descent) where the radial G is the horizontal component of the acceleration due to the lift from the wing at a specific bank angle (radial G = tan (Bank angle) * 9.81 m/sec2), and converting knots (nautical miles/hr) into meters/sec.

That's where this formula came from.

The second one is simpler. It is based on the fact that there are 360 degrees in a circle, and that the circumference of a circle is 2 * Pi * radius So if your airplane travels at velocity V (in knots) it will travel completely around the circle (360 degrees), in amount of time = (Distance / Velocity) hours (because we are specifying V in nautical miles per hour). The rate of turn is the number of degrees per unit time, so we just need to divide 360 degrees by that amount of time, and then also divide by 3600 to get from degrees per hour to degrees per second...

This formula is dependent on entering the Velocity in Knots, and the radius in nautical miles. if you want to enter the radius in feet, then you need to convert that as well (one nm = 6080ft) and the formula becomes

Remember, all of this is only true for an aircraft in a level (no climb or descent) constant bank angle turn). If you are turning in the vertical, the assumptions in this about the radial G required to maintain level flight at a specified bank angle will no longer be true.

Not the answer you're looking for? Browse other questions tagged aircraft-design aircraft-physics flight-dynamics or ask your own question.

2
How do I make a simple model to simulate a banked turn?

3
In a non-symmetric turn, how do the side slip angle and thrust side slip angle affect the equations of motion?
10
How does turn radius change with velocity between Vm and Vs, as in a 180 degree turn in a canyon?
0
How to calculate on ground aircraft yaw rate knowing the longitudinal speed and inferred yaw angle
1
What is airflow direction in turn?
3
Is the turn radius at fixed bank angle really independent of aircraft type?
5
How can L/D Max be both Best Glide speed and Max Range speed?