Why does lift decrease and drag increase when approaching the stall condition?

This is an ECQB-PPL question specifically asking what happens before the stall. I do understand that after the critical angle has been reached, the airfoil is no longer generating lift (so obviously the lift decreases) and parasitic drag increases dramatically. However, it is not clear to me why this is true when approaching the stall condition.

The magnitude of the lift vector is described by the following formula and $C_{lift}(\alpha)$ still increases (albeit slowly) when approaching the stall condition $\alpha_s$:

Or is it a purely geometrical consideration, and what is meant by this question is that as the lift vector is assumed to be perpendicular to the airfoil chord average local relative airflow, its vertical projection (that should counteract weight) decreases, and its horizontal projection adds to the drag?

Just to highlight the reason why I'm confused: my understanding of the definition of "stall" is that $C_L$ has flattened out and maximum lift has been reached. Therefore, I thought that the lift would still (slowly) increase, and not decrease when approaching the stall (but not having reached it yet).

This is assuming that the airplane is otherwise in a stable level flight.

After the stall is reached the airfoil still generates lift, but less than before the stall. Plus drag has greatly increased due to the separated boundary layer on top of the wing, which causes pressure drag.

Figure above shows why the boundary layer separates: the airflow close to the skin is slowed down by friction, and does not have enough kinetic energy to overcome the pressure gradient along the upper aft side. Static pressure in the Wake region of the picture is quite low, causing the pressure drag.

Loss of lift is also because of the separated airflow, the flow aft of the separation point is lost for lift generation. Lift loss is not due to wing tilt: the lift vector is perpendicular to the airspeed vector, not to the wing chord. 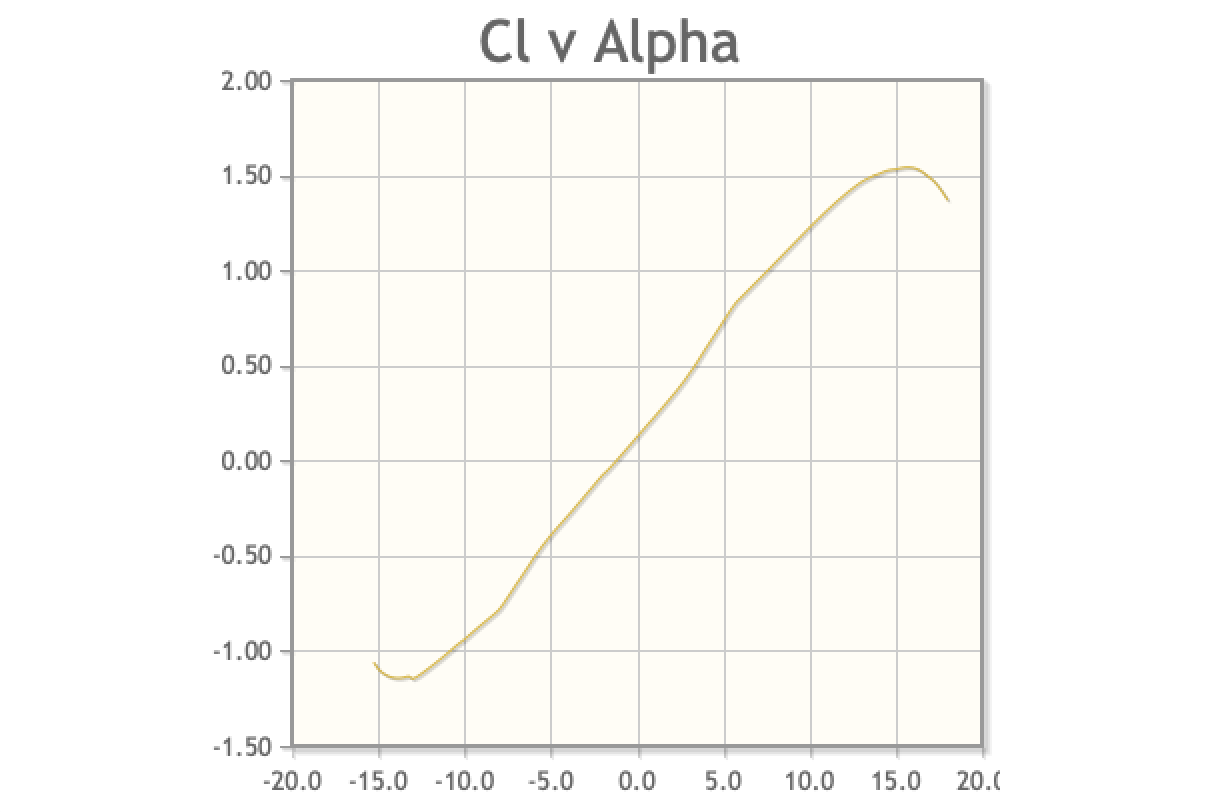 Above process takes place gradually: $C_L$ increases linearly with angle of attack until the separation point is located at the wing aft tip (about $\alpha$ = 12° in the plot), then gradually diminishes with AoA until it peaks out at $\alpha$ = 16°. At this max $C_L$ peak there is quite some separated airflow at the top wing area already.

The answer start by understanding how are aerodynamic forces generated. The aerodynamic forces are a result of the pressure distribution around the airfoil and of the shear forces due to the viscosity (look at the wikipedia definition, without entering too much into details). 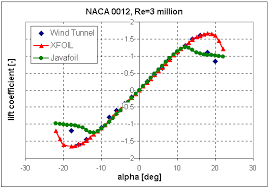 Starting from this, we can have a look to a simple case (NACA0012) in which we have a symmetric airfoil at 3 degrees. The flow field result to be "attached" to the airfoil and we have the maximum efficiency, because we do not have "ricirculation zones" (mathematically we can pose the Hypothesis of Potential flow and say we have no zone with vorticity different from 0, if you want to know more have a look at Helmoltz' theorems). The more we increase the angle the more we happen to have an adverse gradient in the back of the upper face of the airfoil. At a certain point that adverse gradient brings the boundary layer to separate and the flow being no more attached (have a look at this to understand the mechanism). This bring to a different pressure distribution as you can see from the picture of Thwaites I attach to you here. 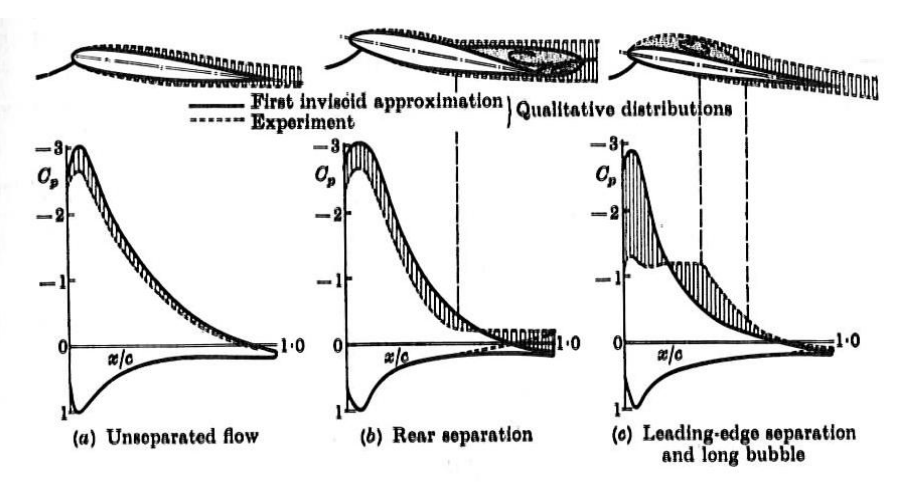 As you can see the resulting of the pressure distribution (the area under the line) is less prominent. This can be easily described with the Bernoulli theorem. You can imagine that the fluid vane is limited by the de-attached flow and hence you have an increase of pressure with respect to the attached flow. So finally this is the physics behind the stall and the degradation of the aerodynamic performances (abrupt decrease in lift and increase in drag, due to the form drag). Regarding this exists different type of stalls. To know a bit more, I suggest you to read this NASA report.

The fact that the lift decreases before the stall depends on the type of stall that you have. On the ECQB I think that they mean with "stall" not the degradation of aerodynamic coefficient stall but the case in which the flow is completely separated. There are stalls in which a laminar separation bubble is placed on the upper faces, but you have a re-attachement due to turbulent transition. You can see an example in the figure below (leading edge short bubble). 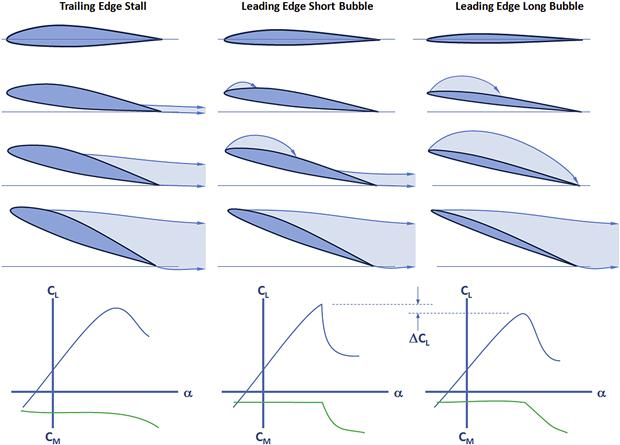 Here you have a decrease of the lift before the complete separation of the flow, hence it would give an answer to the ECQB question.

A simple and arguably easy to understand answer is that the wing does not produce separate forces called Lift and Drag. It produces force at every point of the wing *, pointed in a direction normal (perpendicular) to the surface of the wing at each point. Lift is just the sum of the the components of all these forces that are normal or perpendicular to the flight path of the airplane (it's direction of flight through the air), and Drag is just the components of all these forces that are parallel to the flight path.

At airfoiltools.com you can examine many relationships of lift and drag without worrying about the "right" answer on a test.

In one particular course of study, "approaching stall" may be the warning buffet of airflow separation from the trailing edge of the wing. With a magnifying glass, you may see lift begin to decrease here as drag continues to increase. Maybe in a range of a few tenths of a degree AoA, before the wing fully stalls.

But, as the "polar graphs" indicate, and as a pilot, the exact AoA this happens is trivial, and different airfoils can have vastly different behaviors near stall. Is is best to use V$^2$ for adequate lift when flying and stay away from excessive AoA.

A possible theoretical explanation for a certain wing may be within the 3D realm of examination, that being the wing tip vortices begin to curl back into the top of the wingtip more at higher AoA, thereby reducing total lift just before stall.

One might speak to their professor regarding that subject.

Not the answer you're looking for? Browse other questions tagged aerodynamics lift drag stall or ask your own question.

5
What is the fundamental physics behind L/D decreasing as AoA increases beyond the optimal point?

5
For a large commercial plane on landing, does the L/D ratio increase, decrease, or not change much?
6
What is the effect of flow separation on lift, pressure distribution and drag?
7
Will a stalled aircraft fall down like a brick? Or how steep does the Lift-AoA curve fall off after stall?
2
How can the zero-lift drag coefficient (parasitic drag) be calculated?
12
Why does stall speed decrease when flaps are deployed?
0
Do wingtip vortices cause a decrease in the lift component of aerodynamic force, and do planes need to pull more AoA to compensate?
14
Why does a stall decrease lift, rather than increasing it?
1
How does wing aspect ratio influence lift and drag?
0
New Research: VGs increase lift to drag ratio up to 880%. Does it work for flaps too?
3
Why does stalling increase drag?