Ask Question
Asked 4 months ago
Modified 4 months ago
Viewed 724 times
3
$\begingroup$
Closed. This question is off-topic. It is not currently accepting answers.

Lets say aircraft has two ram air turbines that work as generators to produce electricity on each wing. One has two blades and one has 8 blades, both with the same diameter.

What is the aerodynamic reason why the turbine with 8 blades will rotate slower (lower RPM) then the one with 2 blades?

Often people say each blade adds drag, so drag reduces RPM but where is aerodynamic drag on blades if the resultant force is always tilted forward? A component in the forward direction is thrust, not drag. So what slows down the rotation?

I think there can be only 2 reasons to slow down rotation: 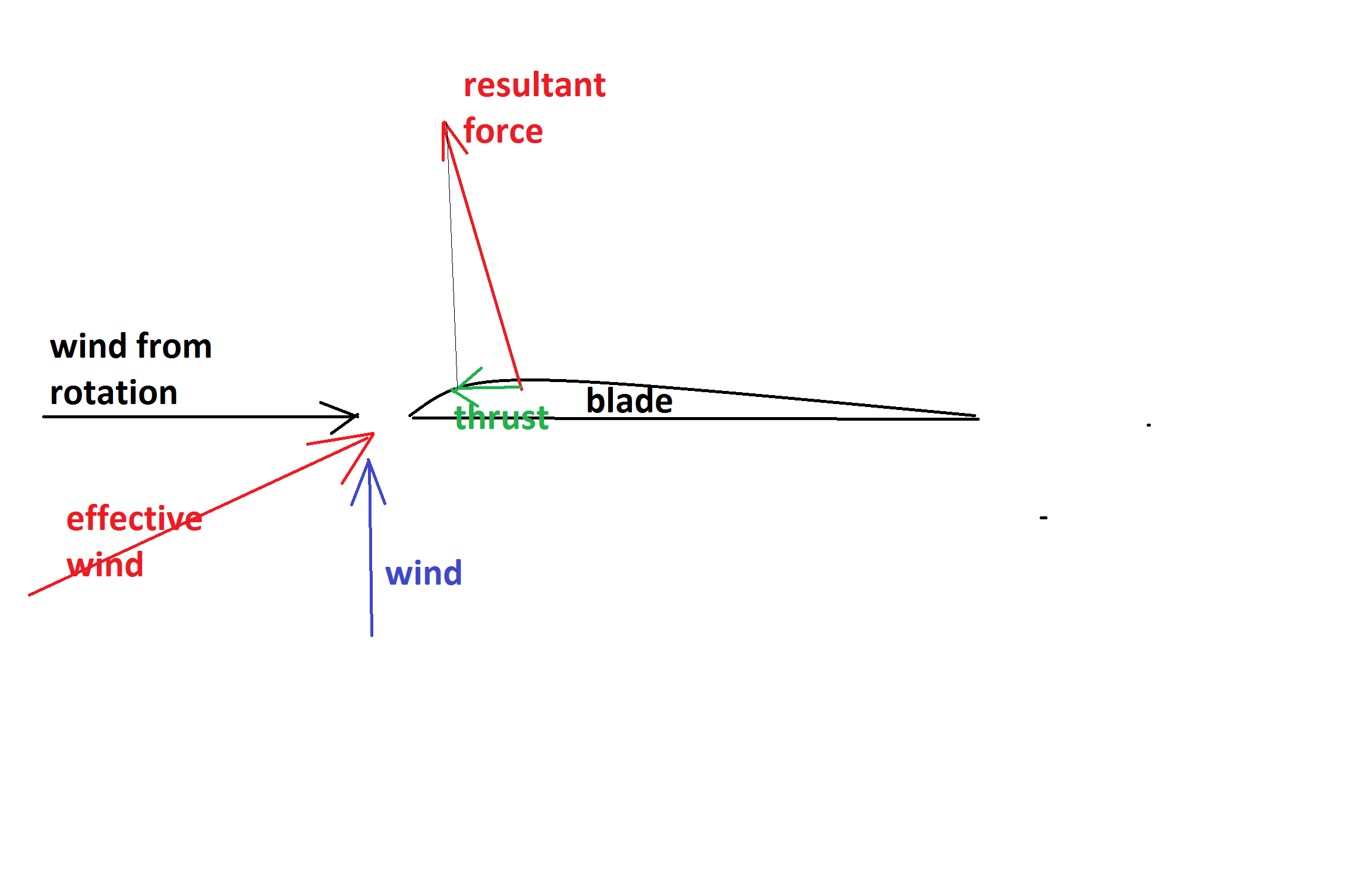 The tip speed ratio is the ratio between tip speed tangential velocity and wind speed that blows at the propeller. So for same wind speed one blade has the highest RPM... 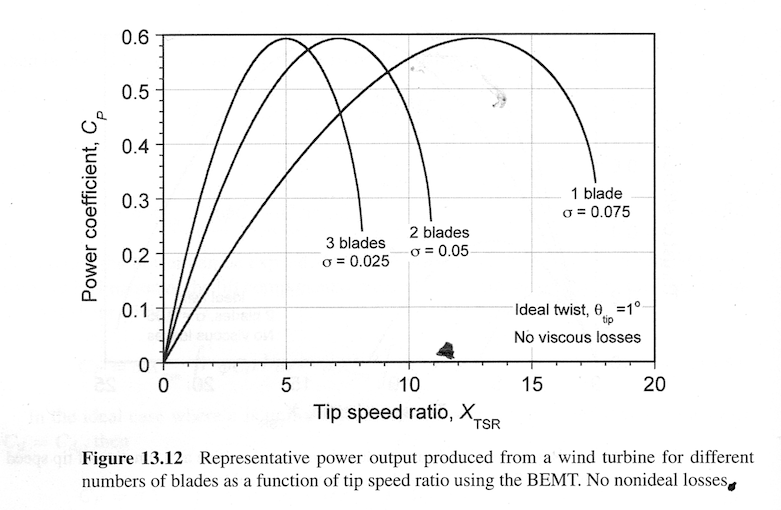 Pic above is from Principles of Helicopter Aerodynamics by J. Gordon Leishman, and shows results from a combination of momentum and blade element theories (BEMT). With no viscous or tip losses to consider:

Notice that increasing the number of blades (or increasing solidity) does not affect the maximum efficiency of the turbine, but it does affect the tip speed ratio (or wind speed) where maximum efficiency is obtained. Too many blades ...gives a steep power curve that peaks at low tip speed ratios. This is not very useful in practice, besides the fact that the blades will also be approaching stall at these conditions (high wind speed).

So yes, a propeller with more blades turns slower when windmilling, because it has absorbed the maximum power at a lower rpm than the 2-bladed propeller. It is important to realise that the higher blade propeller turns slower by design - the blade angle is not fixed, but set according to wind speed, in such a way that the design tip speed ratio @ optimum is reached. And this is also the case with a windmilling propeller on an aeroplane, in fact the blade angle is set such that the prop does not turn.

In helicopter rotor measurements it has been shown that rotor solidity is a main design parameter: how much of the disk area is covered by blade area. How the blade area is distributed over the number of blades is of secondary importance, so a twin blade rotor performs much the same as a four-blade rotor with half the blade chord. Except for the noise and vibrations generated.

What is aerodynamic reason why turbine with 8 blades will rotate slower then with 2 blades?

It won't, all else being equal.

If we quadruple the number of blades, making each of the added blades identical with the originals, then according to naive, oversimplified, aerodynamics we are quadrupling the aerodynamic forces on the turbine (the ones driving it). The resistance is not quadrupling, so the turbine will spin faster.

It won't spin 4 times as fast for two reasons. Firstly, as the turbine speed increases the non-aerodynamic resistance increases, and they will balance at significantly less than four times the speed. Secondly the aerodynamic behaviour changes as the speed increases, including both an increase in the aerodynamic drag of each blade and aerodynamic interference between the blades, reducing their "lift". (Aerodynamic interference is why biplanes don't have twice the lift of monoplanes. It can actually reduce the many-bladed turbine's aerodynamic force below that of the few-bladed one.) That's what I meant above by saying that we are quadrupling the aerodynamic force only for naive, oversimplified aerodynamics. These two factors means the 8 bladed turbine will top out at well less than 4 times the speed of the two bladed.

It's also important to note that 8-bladed fans aren't designed by simply taking a two-bladed fan and adding six more identical blades. The blades will be designed differently. Turbines have an intended operating speed and the blades will be designed so the turbine operates at that speed for expected airflows. Higher turbine speed does not always mean more power - a multi-bladed turbine may be designed to run at a lower speed and generate the same power as a differently-designed two-bladed one.

Imagine a propeller being turned by an engine suddenly losing power. How to make it a good generator as well as a good propeller? Probably a more symmetric airfoil. As seen here, a good airfoil shape will help create more lift/thrust from the relative wind.

Not the answer you're looking for? Browse other questions tagged aerodynamics turbine blade or ask your own question.

26
Why is *vertical* autorotation in a helicopter not recommended?
2
How does Propeller windmilling work?

13
What causes hunting movement in helicopter rotors?
4
What factors determine the direction of the resultant force vector?
5
How come there is no attempt at an "inter-meshing rotorprop" high-speed helicopter?
4
On a constant speed propeller, how is blade pitch related to airspeed and efficiency?
4
How to estimate blade interference in a propeller or fan?
1
Helicopter Flight: What is the reason for decrease in Induced drag with increase in speed?
1
Helicopter retreating blade stall: Increasing the fwd speed decreases the tip speed on retreating side and angle of attack. So why limit on V_n.e?
1
Wing vs wall to wall wing,total drag comparation at same AoA?
1
Is flow attached at fixed propeller blade at every RPM / speed conditions?
0
Why does the centrifugal twisting force move variable pitch propellers to fine?