Does it make sense towing airplanes to the head of airstrip by external (eg electric) means?

Does it make sense towing airplanes to the head of airstrip by electric means, whether internal or external?

Taxiing from the gate to the runway on jet power seems like a waste of fuel. Is it possible and it would make sense to tow the airplane to the start of take-off run by a motorized towing unit or perhaps with electric motors in the airplane's landing gear? Was this ever tested or assessed?

Was [towing unit or motors in landing gear] ever tested or assessed?

Using the Auxiliary Power Unit (APU) generator to power motors on the main wheels, the EGTS taxiing system allows aircraft to push back without a tug and then taxi without requiring the use of the main aircraft engines. One wheel on each main gear is equipped with an electric motor to drive the aircraft

Lufthansa Technik has proven with a technology demonstrator that aircraft can be driven on ground by electric motors.

From Lufthansa Technik (with video)

As of 2015 Taxibot, a semi-robotic towbarless tractor which meets and connects to aircraft, is the only alternative taxiing system certified and currently in use by airlines in the market.

Honeywell and Safran have pulled the plug on their jointly conceived electric taxiing system, while rival developer WheelTug aims to enter service with its system in 2018.

"After thorough market analysis", the US supplier says, the two partners "agreed to stop work on the Electric Green Taxiing System due to dramatically lower oil prices and the current aviation industry's economic environment".

EGTS had been scheduled to enter service this year, with Honeywell and Safran having planned to produce a system for line- and retrofit on A320-family and Boeing 737 jets.

Meanwhile, Gibraltar-headquartered WheelTug plans to enter service with its nose gear-mounted electric drive system in 2018. ... initially on 737s and, at a later stage, on A320-family ... Neither Airbus nor Boeing are supporting the programme

Variations on this kind of scheme and designs are currently being worked on. From what I remember, using electric motors are still pretty expensive, and also you're using them for a very short time frame, such that you're lugging around extra weight that is useful for a tiny portion of time(aka more fuel burn). Tugs of various sorts have been used at various places as well.

Also consider that various engines need time to warm up before applying full throttle, sometimes just a few seconds, others a few minutes.

This is an older question, and I have no answer, just experience:

When I flew from Frankfurt (FRA) to Geneve (GVA) in January 2015, we were towed by a tug nearly all the taxiway to the runway. We turned to the parallel taxiway "N north" to get rid of the tug, then went back on taxiway "N" to the runway.

Here is our way as tracked by my mobile GPS: 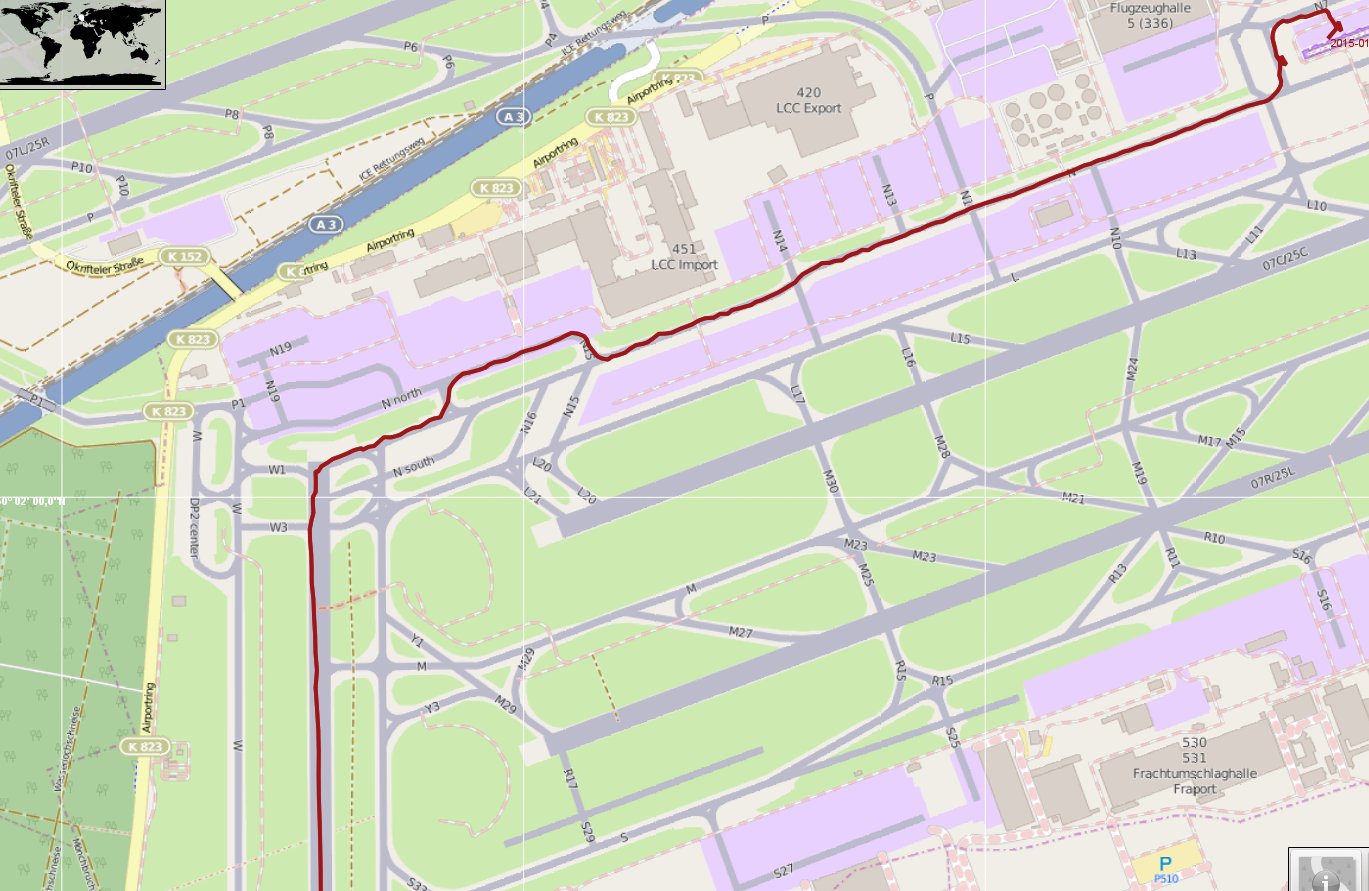 The pilot told us in advance that we will to this, and that it is some kind of experiment / project / study about if it works. (I guess more from logistics / operation side)

From my data, I also have some time information:

If I remember correctly, the engines were started when we were on "N north", so 5-6 minutes before takeoff. However, we were taxiing to that place 20 without engines.

It would be interesting to know how much fuel could be saved by this procedure (It was a A320 or similar, I don't know), but at least, the aircraft didn't need any extra equipment.

(And yes, it was an ordinary tug, not this electrical stuff or similar.)

Along with fitting electric motors to allow push-back without a tug and more efficient taxiing, there is a plan to use tugs controlled by the aircraft for the taxi.

One simpler alternative for multi-engine aircraft is to taxi out with only some (or just one) of the engines running, starting the remainder within a few minutes of take-off. It might not save as much fuel as, say, a tug, but it can be done with existing aircraft and without any extra equipment.

The major drawback of any of these approaches is that running time during taxi contributes to check-out of the fuel, fuel system and other engine systems which all have to perform properly for a safe take off. Delaying engine startup reduces/limits the opportunity for such checks.

Nevertheless, I think this practice has been done/is being done in some situations.

Not the answer you're looking for? Browse other questions tagged taxiing electric-engine towing or ask your own question.

8
Why don't large commercial airplanes have electric motors in the wheels?
51
Could airliners use a steam or electric powered catapult for take-off?
18
Has there been any attempt to use an underground cable system, a la a cable car, to tow aircraft along taxiways?
16
How does an aircraft taxi?
11
Is starting a jet engine without ground support possible?
7
Why not tow aircraft instead of single-engine taxi?
0
Would a chain strip built in the airport taxiways, help airlines in saving money and time during taxi?
3
Why are autonomous vehicles not used at airports for on-ground services?
4
How are forces on the landing gear reduced or compensated for at touchdown?
0
How do plane landing-gear tyres roll before take off?
See more linked questions

56
What energy density is required for the batteries in order to make an all-electric analogue of the Cessna 150 or similar plane?
5
Does a "take-off" assist make sense for electric aircraft?
7
Why not tow aircraft instead of single-engine taxi?
2
How does altitude affect the TAS and thrust of an electric fan powered aircraft?
8
What effect does towing a glider have on the stall speed of the tow plane?