What are satellite time, GPS time, and UTC time?

What is the difference between Satellite time, GPS time and UTC time? How are these calculated from one another?

Both GPS time and UTC are derived from the atomic time TAI, a reference used to define the time unit in SI, kept by 400 atomic clocks in the world. GPS time unit and UTC time unit are the TAI second. In addition GPS time and UTC were equal on January 6 1980. End of 2021 the relationship is this one: 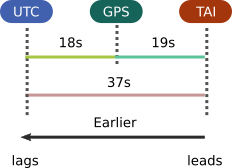 While the TAI scale is invariant, the year duration varies, mostly due to Earth decreasing rotation rate under the braking effect of tides. As humans, we expect noon of some day (Sun at its zenith), e.g. on February 19, to really happen each year at the same legal time. So the scale for legal time has to be flexible, unlike TAI. We use UTC for this purpose$^{(1)}$. UTC is TAI with leap seconds. Solar noon is delayed each year by some tiny amount, a mean 0.75 second. UTC matching with solar time relies on two actions:

In practice, few clocks or applications behave this way, most ignore the leap second, and most which do not use it correctly (e.g. some will slice the additional duration and distribute it over several hours before and after midnight).

The consequence of adding a leap second is the next UTC day lags behind the corresponding TAI day by one additional second and repeating this operation UTC differs from TAI by an increasing number of seconds. If TAI was convertible to a date using a calendar, we would have a difference in the date around midnight. But a calendar is only a notion valid for UTC, neither TAI nor GPS time are convertible to a date, they are only expressed in their canonical form, a count of seconds since the origin (epoch), a precaution which also protects them against bissextile years complexity.

While UTC time is adjusted for Sun zenith at constant time of the day, UTC date is similarly adjusted by an additional days each 4 years or so, to prevent the vernal equinox and Spring date to lag more and more. The reason is 365 days is not enough for Earth to complete its revolution around the Sun, it needs about 6 more hours. This adjustment maintains the Spring equinox in the range 19 to 21 March.

GPS time is never resynchronized; its offset from TAI is the number of leap seconds which existed on January 6 1980, that is 19. GPS and TAI are uniform (continuous) times; UTC is discontinuous due to leap seconds.

Note none of the "times" we measure today is an absolute time (e.g. since the Big Bang), they are a duration since some conventional close landmark (e.g. TAI was reset in 1958, UTC in 1972, GPS time in 2019). The duration expressed in seconds is the same as long as the duration unit is the same. This is the case for TAI, GPS and UTC which all use the atomic second defined in the SI. things get complicated only when converting this duration into a date/time, using the specific starting point and unequal years, days, minutes and hours introduced by leap years and seconds, which needs to be inserted properly. UTC is a broker of uneasy compromises, using the invariable atomic second unit, but kept in sync with UT1 which uses the variable solar second unit.

Time in space and time references for space

Time aboard a satellite, is a bit different than on Earth due to relativistic effects and altitude. For example on a Navstar satellite (GPS), time is slowed down by velocity and accelerated by the lower gravity in altitude, giving a global accelerating factor of about $5.3 \times 10^{-10}$:

If not accounted for, in one day it could build up to a timing error that would translate into a navigational error of 13.7 km.

$^{(1)}$: The use of UTC instead of TAI, while usually presented like I did as a need to keep in sync with Sun, is actually based on an imbroglio mixing legal reasons and administration poor understanding of the huge risks and difficulties created by leap seconds for a little practical benefit. WRC 2023 conference will decide whether leap seconds should continue to be used for another 8 years or die. The clock is ticking...

UTC time truly has two parts: the date and the time within that date. Most days are 86,400 seconds long, but they may occasionally be 86,401 or 86,399 seconds long (due to “leap seconds”) to keep UTC in sync with Earth’s slightly irregular rotational period. Some systems may (incorrectly) represent that as a count of seconds.

GPS ephemera helpfully includes the net number of leap seconds added or subtracted under UTC, which is +18 as of 2021, so you can easily derive the current UTC date and time if that’s what you actually need.

Other satellite systems may have their own definitions of time.

Disclaimer: Since I am using Wikipedia references below, this answer itself should not be used as a separate source for a any wiki article. Please look at the respective articles for the direct references to ensure they are the most current, accurate, and provide the proper source references.

When I was doing some Supplemental reading this question prompted I found this archived article from InsideGNSS, which talks about how time is compared between the GPS and Galileo, but also talks about the way the GPS System time is related to UTC. I added emphasis for the specific for this question but included the section for context. If you want more information you should probably review the article on the main site which may have more up to date information since none of the various systems are completely static.

Galileo runs on Galileo system time (GST), which is generated on the ground at the Galileo Control Center in Fucino, Italy, by the Precise Timing Facility (PTF), based on averages of different atomic clocks. GPS system time is computed by the GPS control segment using an assembly of clocks — the GPS Composite Clock, which consists of all operational monitor station and satellite frequency standards. GPS system time, in turn, is referenced to the U.S. Naval Observatory’s Master Clock and steered to Coordinated Universal Time — UTC(USNO), corrected for leap seconds (which GPS time doesn't use).

These two internal times are derived independently of one another but are kept close to the world’s reference time, coordinated universal time or UTC, with the offset between the two being precisely calculated on a continuous basis for the Galileo system by the PTF.

It would appear that at least these two GNSS providers reference back to UTC. UTC itself is derived from TAI (International Atomic Time), which is itself based on a weighted average of 400 atomic clocks spread around the world.

I did see one thing in reading that TAI article that I do not have the experience to resolve. It appears TAI currently uses GPS system time to validate the timings between different atomic clocks. This would seem to lead to a cyclic Self Referencing error so I can only hope that was some how mitigated.

It could be that the nature of an encyclopedia entry is necessarily simplified leading to the apparent confusion. For practical purposes the time difference are probably extremely small.

Not the answer you're looking for? Browse other questions tagged gnss or ask your own question.