What is the purpose of the leaf spring in an altimeter?

What is the use of the leaf spring present around the partially evacuated aneroid capsule of sensitive altimeter.

A new balance will be found at a different position of the spring. This change of position is translated into a rotation of the needle of the altimeter.

Without the spring, the capsule would tend to collapse at or below sea-level pressure-altitude. The spring opposes the high pressure. 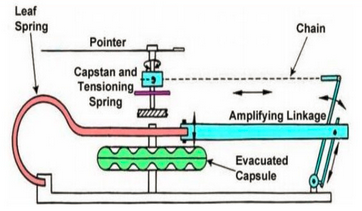 A variation of the principle above it to put the spring on the index mechanism.

Not the answer you're looking for? Browse other questions tagged flight-instruments altimeter or ask your own question.