Is it possible to fly to any destination on a rhumb line track?

If we follow a constant rhumb line track, it would eventually lead to the pole (depending on your hemisphere) , so then it may not be possible to fly between any two points on a rhumb line track? 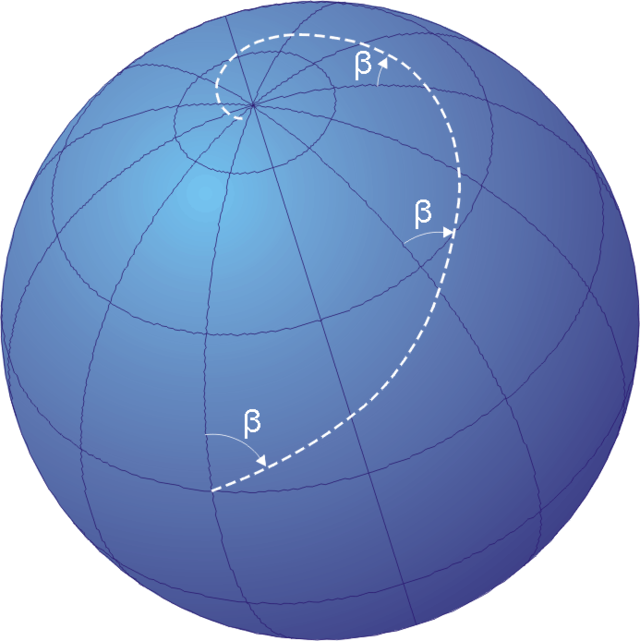 A rhumb line is a line which crosses all meridians at the same angle. Such a route is of constant true heading. This property is the reason rhumb line navigation was invented, and Mercator maps created.

On a Mercator map you just draw the straight line between the two points. This means you can always draw a route between two arbitrary places. E.g. let's connect: 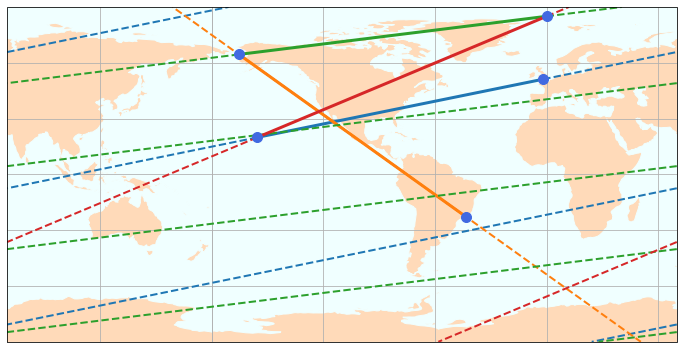 On most projections, rhumb lines appear as curves spiraling between poles, e.g. on this orthographic projection:

Why rhumb line navigation in the first place?

To simplify navigation, they split a great circle route into segments, and navigated each segment as a rhumb line, that is a route within the same rhumb, a rhumb being 1/32th of compass rose (a 32-point rose was often part of the map). They adjusted the heading only at the beginning of the next segment, possibly after they confirmed their position using a sextant.

They used maps just invented by Gerardus Mercator for the purpose of facilitating drawing rhumb lines and determining headings.

Aircraft with computerized navigation systems and autopilots are able to adjust the heading as required. They restored the interest in pure great circle navigation.

Yes, it's possible to fly from any point on the Earth from any other point on the Earth via a Rhumb line. The destination pole depends on the course you select, not the hemisphere you happen to start in. Just because a Rhumb Line leads to a pole doesn't mean it leads to the nearest pole. A track of, say, 135 is always going to terminate at the South pole, even if you start in the Northern hemisphere.

If you fly an orthodromic course, the rhumb changes continuously during the flight unless the points of departure and arrival are in the equator or in any great circle that passes through the poles...

It is, however, always possible to fly a constant-rhumb course –a loxodrome– between any two points on the planet.

8
Are there any widely applicable models for plausible aircraft auto-routing?
3
How should I interpret the difference in flight direction (azimuth) for great circle and rhumb line?
3
What is the primary means of IFR navigation for private pilots?
17
If an aircraft flies straight ahead, does it follow an orthodrome/great circle?
4
What is a rhumb line?
4
Do large cities contain enough iron to significantly affect an aircraft's magnetic compass?