What specific hazard is the practice of identifying an ILS LOC by Morse code trying to prevent?

This question got me wondering about the practice of tuning a navigation frequency, selecting it on the audio panel, and then identifying it by listening to the three letter Morse code signal. I know it is a sound practice, and the reason may have been explained to me years ago in a way that made sense at the time, but my understanding has been lost in the sands of time and I have gotten lazy at doing it regularly.

To clarify, I am only interested in answers that can outline a plausible scenario where a mishap could ensue as a result of not identifying an ILS/VOR station by Morse code. For example, how an aircraft might lock onto something on the same frequency that is convincingly similar enough in the cockpit indications, that undetected deviations by the pilot could drive an aircraft unto an unsafe condition and possibly result in a mishap.

So, what is the worst thing that could happen if a pilot failed to ID a Navaid? (Safety of flight, busting a checkride doesn't count!)

P.S. Bonus points if you reference a CFR part that requires it.

ADDENDUM: Thanks to those who took the time to answer. There are some good and correct answers, but a few missed the point in my asking about actual, specific risk scenarios. Because I would never argue against the practice, and I know why it's done, it just feels a bit like an inefficient anachronism when there are so many other better ways to catch an error.

I don't have near the flight hours of a seasoned part 135 or 121 pro, but I have never once uttered in the de-brief: "Gee, good thing we listened to that Morse code ID or we might have ____" (Insert scenario)

And I have debriefed plenty of mistakes, my own included. But any time I've switched navaids on an airway there is an expectation of what the next course and DME will indicate. When that needle swings reassuringly to the inbound course, and DME is plus/minus a mile, flicking that audio switch to hear a few quick beeps feels like a casual afterthought performed out of rote habit.

Because if it locks on something 90 degrees off, and many miles diferent than expected, the first thing I do is doublecheck the entry. Because my eyes can detect a mistake far quicker and more reliably that what it takes to process the audible code. (I'm not steeped in telegraphy!)

I just can't think of a plausible situation where I would be fooled or otherwise miss a mistake and be saved by the Morse code.

However, a signal from a station undergoing calibration that might be picked up but is not accurate, is a very valid concern. And that was the answer I accepted.

Well, one reason would be that apparently when maintenance crews work on a VOR for signal calibration etc. they may take down the Morse code identification but still leave the signal alive while calibration is underway.

Signal integrity and accuracy could be affected during the maintenance/calibration period but a pilot may not know this unless they attempt to listen to the identification and find out it's silent (or the digital readout of the id is missing, depending on your equipment type).

Not everyone reads the NOTAMS for scheduled out-of-service periods for navaids or a non-scheduled outage has occurred.

Also, in a congested area, like Southern California for example, you may tune the wrong frequency because of the many navaid frequency boxes you're looking at while flying and you inadvertently tune in the wrong frequency only to discover this fact when you're given a vector to join the localizer and wind up flying through the approach course.

Additionally, especially with a ILS/localizer frequency, you might just dial in one incorrect digit and, since the Localizer and GS needles are caged, you may not discover the error until you've flown through the localizer course.

No FAR that I can find requires the "tune and identify" procedure, but if you're taking an FAA checkride (PPL, Instrument, etc.) the Airman Certification Standards requires the tune-and-identify step as a mandatory skill to be completed and demonstrated.

modern avionics are actually displaying the ident of the naviad on screens. So if you tune in a VOR or ILS for example, the system actually listens for the morse code and displays it on PFD or navigation display. Checking the ident displayed on the screen serves the same purpose as listening to the morse code. It is not too uncommon to see "TST" or "ZZZ" or some other bogus ident displayed during cruise as some FMS auto-tuned VOR underneath is being under maintenance.

A VOR's signal is, conceptually speaking, pretty simple. It has no authentication or error-checking features beyond the Morse Code identifier. Thus, it's entirely possible for another transmitter to send a signal that looks enough like a VOR to fool the receiver, which will then show some random course based on the garbage signal it's receiving. Now, granted, I can't think of a single type of transmitter that would be close enough to a VOR's signal for this to be a real risk, but that doesn't mean that such a transmitter doesn't exist.

Well, actually, that's not quite true. I can think of one such transmitter: a different VOR. VORs on the same frequency are supposed to be far enough apart that they don't interfere with one another. However, radio range is dependent on atmospheric conditions, and with the right conditions, radio waves can propagate much further than they were intended. (And that's assuming you tuned the correct frequency for the intended VOR in the first place. If you mistype the frequency, you may end up tracking a VOR other than the one you wanted.)

As for what can happen? The pilots of American Airlines flight 965 accidentally selected the wrong navaid on their way in to Cali, Columbia, and wound up flying into the side of a mountain.

The audio feature of VOR and ILS is a remnant of the 1950s. Back then, radio receivers had only an analog tuning knob for frequency selection, as can be seen on the Narco VHT-2 Superhomer depicted below. You would coarsly tune it to the intended frequency using the scale on the top right and then listen to the audio channel and fine-tune until the signal was strongest. Since the frequency scale was not very accurate, having a morse code identifier helped to ensure you had the right frequency.

The specific hazard is "someone with a 1950s radio might tune the wrong frequency." There may or may not be reasons for listening to the audio channel with a modern radio, but compatibility with old (then contemporary) radio receivers is why these features exist in the first place. 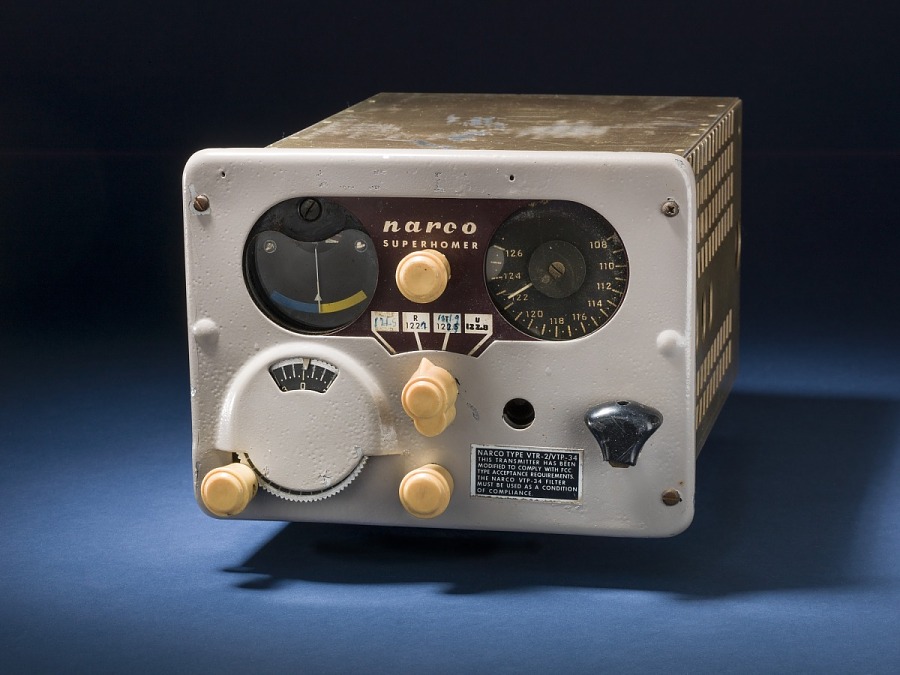 Strictly speaking, the answer to your question is that listening to the Morse code ID of the ILS or VOR won't save you from any specific common hazard. But, I should point out that you are neglecting an important safety principle: redundancy.

Suppose that you were entering a frequency into your ILS or VOR, but you accidentally transposed two digits. Or maybe there is a blob on the chart that makes distinguishing a 6 from an 8 difficult. Or the frequency reminds you of the last four digits of an old telephone number you had, but isn't the same, and you punched in your old phone number instead. Etc, etc, you get the idea. If for some reason you entered the wrong frequency, then if you were to listen for the Morse code ID, or read it off the display, then you would realize that something is wrong and investigate; the redundant information would help you. If you were to ignore the Morse code ID, then you'd be ignoring redundant information that could help protect you from the possibly disastrous consequences of a simple mistake.

3
Is the Morse code identifier required continuously when using a VHF NAVAID for navigation?

13
Are crossing restrictions on an ILS/LOC approach mandatory when flying on the glideslope?
5
What are the different variants of ILS intrumentation?
13
OBI, RMI, HSI... What combination do GA aircraft w/o glass typically have?
9
Why do the RNAV (GPS) approaches to KAPC not use the same missed approach procedure as the ILS/LOC approach?
2
What are the rules of thumb for intercepting and tracking VOR and LOC courses?
12
What navigational aid(s) would WWII bomber pilots have used while flying in instrument conditions?
2
What are the specific side step minimums for an approach?
3
How can a pilot become established on the KBIV, ILS or LOC Rwy 26 Approach?